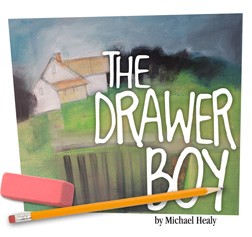 On a summer’s day in 1972 Miles, an idealistic young actor from Toronto (Shaw), knocks on the door of an isolated farmhouse somewhere in rural Ontario. He hopes to move in with local farmers for a few weeks, chat with them and watch as they go about their daily routines, and then make up a play about them and country life.

The farm belongs to Morgan (Kopischke) and Angus (Mancheski), two middle-aged bachelor farmers who accept this naïve intruder into their strange and secretive world.

Morgan has taken care of his friend ever since Angus suffered a massive head injury during World War II. Left with virtually no short-term memory, Angus “only knows right now,” which compels Morgan to re-introduce himself every morning and re-tell the near-mythic story of their life together every evening.

Chosen as one of Time Magazine’s Best Plays of the Year, The Drawer Boy is a humorous, heartwarming play about the simple pleasures of friendship, storytelling and remembrance. But more than that, it’s a rare and profound meditation on the power of theatre to provoke change, to encourage healing, and to tell the truth.

The show runs through April 13 on Thursday, Friday and Saturday nights at 7:30 pm and Sundays at 2 pm. Tickets are $22 general admission, $17.60 VIP member, $10 student, and $5 for children 11 and younger. For tickets, call 920.743.1760 or visit the box office from noon until 5 pm Tuesday through Friday or from noon until show time on show days. For more information visit thirdavenueplayhouse.com.