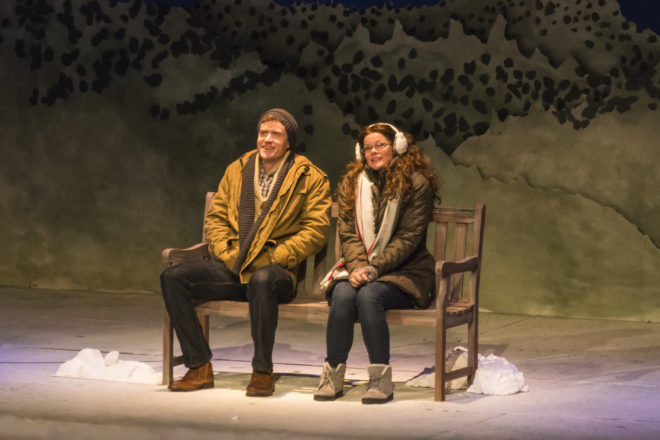 Matt Holzfeind and Erica Elam in the opening scene of the romantic comedy, Almost, Maine, on stage through Oct. 15 at Peninsula Players Theatre. Photo by Len Villano.

Love at first sight. Awkward encounters with an ex. A mutual discovery among partners that they no longer are in love. All of these love-centric situations play out in humorous, heart-warming and at times, uncomfortable ways in Peninsula Players Theatre’s 2017 finale, Almost, Maine.

This romantic comedy, by John Cariani, explores the perks and pitfalls of love through a series of nine vignettes that occur at the same time on the same clear, cold winter night in the mythical town of Almost, Maine.

While their brief stories take place in the same isolated, northern Maine community, there is a deeper thread that binds this collection of characters. They are all at the precipice of their next big step. As director Patrick New explained, they are almost where they want or need to be.

“What we’re witnessing in the vignette is where that next step threatens,” New said. “Either it happens or something about the character keeps it from happening.”

Every scene is a variation on this theme and plays out underneath the Northern Lights in a world sprinkled with magical realism. In Almost, Maine, metaphors of falling in love, holding onto a broken heart, and waiting for the other shoe to drop play out in literal fashion. That whimsical approach finds its grounding on a wintery set built to immerse the audience in these emotional and relatable scenarios. 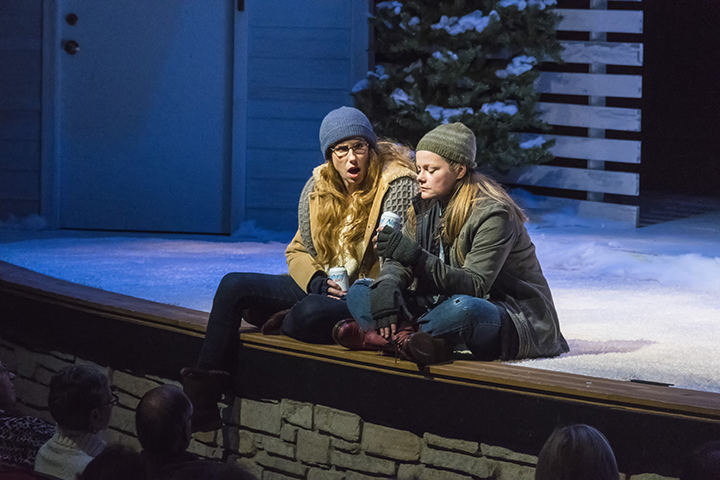 Karen Janes Woditsch and Eric Elam, part of the four-person, 19-character cast of Almost, Maine, which explores the perks and pitfalls of romance in nine vignettes. Photo by Len Villano.

“We included tight draperies over the audience on which we project stars and Northern Lights so you’re not just looking at the stage, you’re looking up, you’re looking around,” New said. “In another scene I had the actors sitting on the very lip of the stage, just feet from the audience so they’re right down there, they’re very close; it makes it more tangible.”

Despite the quirkiness and humor of Almost, Maine, the variety of stories makes it relatable to anyone who has taken a chance on romance, actress Erica Elam explained.

“I think that’s at the core of our humanity is these relationships we form with other people that sometimes make no sense, sometimes feel great, sometimes hurt a lot,” she said. “I was really excited about telling a story I think is so sweet and poetic and optimistic and also so human.”

While the opportunity to be entertained is what brings an audience into a theater, New said he hopes those who witness the magic and realism of Almost, Maine can be inspired to take a leap in their own life.

“What I would like this show to do is entertain but also ask people to entertain the idea of what aspect of their life is an almost and see what they can do to take that next step, to relate to some or all of the characters,” New said. “To think, that is like that portion of my life, maybe I just need to make my own magical moment happen to push to the next level.”

Almost, Maine performs Tuesdays through Sundays at 7pm, except for Sundays Sept. 17, Oct. 1 and 15 at 3pm. Discount tickets are available for groups of 15 or more. Ticket prices range from $38 to $44. For more information or to reserve tickets, call 920.868.3287 or visit peninsulaplayers.com.