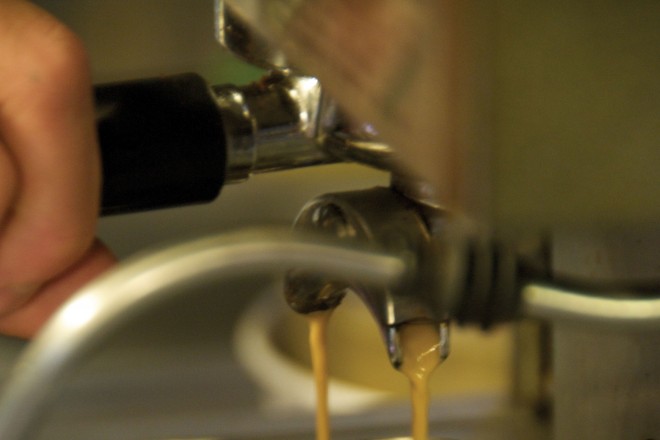 Service at a lower level isn’t what it used to be. Not when you can open the door to Base Camp Coffee Bar below Ecology Sports in Sister Bay and be greeted warmly – by the coffee, by the staff and by the fire.

With his back to the flames of the gas stove, the view of a snowy field through French doors to his right, and the promise of owner Joel Kersebet’s friendly, French-accented repartee behind the counter in front of him, Blake Siewert wouldn’t trade places with anyone. “I hate to admit it, but I’m usually here three to four days a week,” the Sister Bay resident says. “I don’t feel right unless I come in at least once.”

Blake attributes his loyalty to the “high standards” set forth by Joel and his wife, Alicia, which he believes contribute to Base Camp’s “positive vibe.”

It’s a vibe that resonates from the environmental focus of the couple’s business, the sweet, comforting smell of “from scratch” baked goods in the oven, and a Frenchman’s apparent love for a business that has brought about his Americanized déjà vu. “I feel at home here,” Joel says. “I was raised in a small village where my parents owned a restaurant and bar for 37 years.”

The Kersebets bought the circa 1879 former Liberty Grove Town Hall in 1999, following the purchase of Ecology Sports from Alicia’s parents. Although Base Camp opened only four years ago, it was always their plan to have a coffee bar on the lower level to cater to those renting cross-country skis and snowshoes.

Today, Base Camp is open daily at 7:30 am year round. Joel – a food and beverage manager with Club Med for eight years and a graduate of the French Lycee Hotelier Dinard culinary school – manages Base Camp. Alicia oversees the retail operations of Ecology Sports upstairs.

According to Joel, the square footage of Base Camp determined the breadth of its menu. “We wanted a small operation that offers a healthy alternative in a grab-and-go bite,” he says. “We’d rather build up than scale down.”

Base Camp serves Fair Trade and Organic coffees (primarily Ancora), and specialty drinks and tea. The coffee bar also offers a full array of freshly baked goods and a smaller selection of light lunch items with an authentic French flair.

Ann Lynaugh has worked at Base Camp for three years. She attests to the freshness of the coffee bar’s offerings. “Everything is made here except the croissants and baguette, and those are really high quality products that we bake here,” she says. “The menu is evolving, which is characteristic of Joel. He’ll only do something new and different as long as it’s excellent.”

Joel’s original-recipe, vegetarian soups du jour and “Artisan” cheese plate are accompanied by a warm baguette. The quiche du jour is prepared with seasonal roasted vegetables and Gruyere cheese. And, the “Krema Kasa Melt” features an olive tapenade, tomatoes, basil and krema kasa cheese on a warm baguette. A fresh vegetable rémoulade sandwich and the yogurt, fruit and granola parfait round out the light fare.

These items are known to bring in non-coffee drinkers like Steve Brandt, of Sister Bay. “Base Camp is a cheese shop for me – not a coffee shop,” he says. “I love Joel’s cheese plates; I can’t get them anywhere else.”

Lee Traven, also of Sister Bay, used to come to Ecology Sports for skis and now he comes in to Base Camp regularly for lunch. “Joel’s soups are very creative and I like the way he varies the kind of quiche he bakes,” he says.

On hand to tempt the sweet tooth are the “house” homemade cookies and bars – like Joel’s “Base Camp Power Bars” with chocolate, peanut butter and sunflower seeds; cranberry and white chocolate cookies; and Ann’s recipe oatmeal raisin cookies.

But it’s the fresh-from-the-oven daily bakery line-up of coffeecake, muffins, scones, carrot cake, tarts, plain and filled croissants – and of course the baguette – that many find hard to resist.

Kathy Ward, of Ellison Bay, is a loyal member of the Thursday morning Turtle Ridge/Shoreline/Flora employees coffee group that meets at Base Camp during the winter months. She lets temperature determine the kind of pastry to accompany her Mexican Altura Medium Roast brew with cream and sugar. “I’ll have whatever Joel has most recently pulled from out of the oven,” she says. “Anytime you can get homemade pastry and coffeecake, and someone else has done it, it’s great.”

Donna and David Clough, who split their time between Lake Bluff, Illinois and Sister Bay, agree. “It’s like home, but it’s not my home – it’s always fresh,” Donna says, while sipping a decaf “skinny” latte.

“The fact that you can see it all happening here and that it’s delicious is kind of unique,” David says. “We have a debate over which is our favorite:  the peanut butter cookie or the crumb cake.”

For Chuck Pierpont, another resident of Sister Bay, the choice is simple. “I’m all about the caffeine,” he says. “I come for the coffee and atmosphere. I like the fireplace and the canoe.”

The ambience of Base Camp is an extension of the casual, outdoorsy feel of Ecology Sports. The stone walls are painted white and the dark green-painted ceiling has a canoe nestled between a pair of its exposed rafters. One end of the Base Camp space serves as the cross-country ski rental area. The opposite end has a raised, hardwood floor platform with four wooden tables and director’s chairs. The gas stove and a floor-to-ceiling built-in bookcase displaying ecological and travel-oriented products and books complete this area.

Joel’s most current renovation of the space into a coffee bar follows a long history of uses for the subterranean venue. Among them were a glass blower’s studio, a furniture store and a summer vacation rental. Originally, the space provided storage for the Liberty Grove Town Hall after a basement was created for the building through the Depression era, federally-funded Works Progress Administration (WPA). At that time, WPA workers lifted the building to make room for a new foundation.

By the looks of the number of cars in the parking lot on a frosty morning in February, Base Camp has found its own solid footing. “There’s a lot of coming and going,” Blake says. “There’s familiar laughter, carrying on and stories being told.”

“When I go in, there’s always interesting regulars and different groups of people here,” Kathy says. She attributes the friendly atmosphere in part to the dual level seating of Base Camp. “It’s a way to expand the conversation circle,” she says. “Physically you’re as close, but by being up and down it puts you in a different plane. You feel comfortable whether you’re mingling or not.”

Alex Schwartz, a first-time visitor to Door County from the Chicago area, has definitely felt the welcoming “vibe” of Base Camp.  “It’s very relaxing and the food is great,” he says. “This is the second time I’ve been here in three days.”