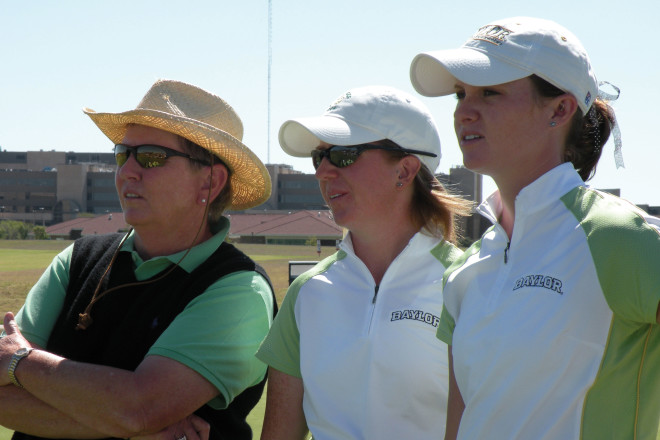 As an ardent player, she competed on the Ladies Professional Golf Association (LPGA) tour against the 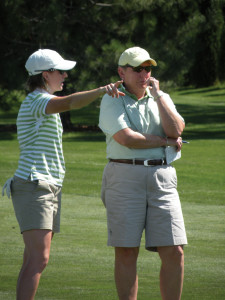 likes of Nancy Lopez. As a devoted teacher, she spent 10 summers as the head teaching professional at Peninsula Golf Course. As a passionate coach, she has been in command of a successful Baylor University women’s golf program for over 16 years. And as a determined survivor of ovarian cancer, she is a living testament of her own perseverance and self-determination.

Sylvia Ferdon grew up poor, but happy, in the small town of Pensaukee, Wisconsin, the daughter of a Norwegian fisherman, Olaf Johnson. She spent much of her childhood on the waters of Green Bay and was even driving her own boat as early as seven years old. After grade school in a one-room schoolhouse, she was sent to the Oconto public school system. It was then she took up the game of golf and for 20 dollars was able to play the local 9-hole golf course all summer long.

“I was a real tomboy. I grew up playing sports with my brother and all the boys,” explained Ferdon. She took special interest in the game of golf, and those around her soon took special notice of her inherent talent.

An Oconto High School Physical Education teacher by the name of Jan Blumreich encouraged and mentored Ferdon in her early years. She, along with Tom Moody, a “second father” to Ferdon, purchased her first set of clubs. In the winters, Blumreich would drive Ferdon the two and a half hours to Milwaukee to take indoor golf lessons from the legendary golf instructor, Gordy Watson.

Ferdon attended University of Wisconsin-Oshkosh and was considered one of the university’s pioneers of women’s athletics, lettering in four sports:  golf, basketball, volleyball, and field hockey. “I was a one-woman golf team,” laughs Ferdon of her collegiate career.

Oshkosh did not have a women’s golf team at the time, but several faculty members chipped in to help with Ferdon’s traveling expenses to compete against the bigger Division I schools. In 2002, Ferdon returned to her alma mater to be inducted into the UW-Oshkosh Athletic Hall of Fame.

After college, Ferdon held a variety of golf teaching and coaching positions including short coaching stints at Florida State and University of Florida. Ferdon continued to hone her skills as a player on the amateur level, all the while setting her sights on making the professional tour. Explains her husband, Doug, of her fiery determination, “If Sylvia wants something, she aims at it. She can see the work ahead of her, and she gets it done.”

Ferdon qualified for the LPGA at the age of 30 and spent five years on the tour with husband Doug as her caddie. The couple purchased a streamline trailer, traveled the country and made the most of the LPGA’s meager purses and Ferdon’s earnings. “We were a great team,” smiled mild-mannered Doug, a Journalism Professor at Baylor University, who was able to spend his summers on tour with her. “Sylvia was one of the older players on tour, and we just looked at it as one big adventure.”

“The tour was so small then, only about 80 players. You got to know everybody and establish relationships,” remarked Ferdon. Throughout her years on tour, she competed and held her own against some of the game’s greats:  Lopez, Beth Daniel, Betsy King and Mickey Wright.

An unexpected surgery for fibroid tumors sidelined Ferdon from the tour. A failed attempt at re-qualifying for the LPGA proved to be a disappointment for the strong-willed Ferdon, but ultimately led her to her 10-year teaching tenure at Peninsula, beginning in 1984.

After previous visits to Door County, Doug and Sylvia ventured north to inquire about a position as a teaching professional at Peninsula. At the time, Ferdon recalls meeting with two key figures from the park, John Brann and the late Wally Klepp – two of many lifelong friendships she would establish throughout her decade at Peninsula.

With assistance from the Peninsula Golf Association board, Ferdon started the popular junior program that is in existence today. “I remember one year, we had 60 kids!” exclaimed Ferdon. “That’s when we had to start putting a limit on it.”

“I just absolutely loved my time there,” she recalled with fondness. “There’s just such a great nucleus of the clan at Peninsula.” Doug and Sylvia would summer in Baileys Harbor so she could teach golf and they would return to Waco, Texas for Doug’s teaching position at Baylor. “At the time, for Doug and I, it was just the perfect lifestyle for us.”

Ferdon’s years at Peninsula ultimately led to what she believes to be her calling – coaching. “I look at it like every step in my life led me to coaching. It led me to what I was really meant to do,” she remarked.

The Baylor Bears have enjoyed tremendous success under Ferdon’s remarkable leadership. Twice she has been named Big Twelve Coach of the Year. “For Sylvia, it’s never been work. It’s never been about money. She loves what she does, and does what she loves,” remarked Doug of his wife’s relentless commitment to coaching.

“Sylvia is the kind of coach who brings out the absolute best in her players. She always believed in me. She gave so much of herself to help me accomplish my goals,” remarked Melanie Willhite, one of the best golfers to emerge from Ferdon’s Baylor program. Willhite, who is currently employed as an engineer at Nike Golf, added, “Sylvia is such a first-class person. You rarely meet people like her anymore. I admire her so much – to this day, I joke that I want to be just like her when I grow up.”

Six years into her success at her “dream job,” Doug and Sylvia received the scare of their lives. “It was a sudden, unexpected attack. I got a call from the hospital and they said, ‘We’re losing your wife,’” calmly recalls Doug of a harrowing day over 10 years ago.

The doctors were able to save Ferdon and address the cancer, but Doug soon learned of the ominous outlook. “Back then, there was an 8 to 10 percent survival rate for that type of cancer.”

“Doug would know that – he’s a numbers guy. I didn’t want to know statistics and survival rates,” explained Ferdon. “I knew I had stage four, and I knew that wasn’t good. But I just took it one day at a time.”

For one who has a reputation for deflecting attention away from her, Ferdon’s Baylor team was the perfect distraction. “Thank goodness for coaching – I just kept coaching and recruiting. The kids were so great; they were so supportive.”

Through the entire ordeal of chemotherapy and doctor’s appointments, she proudly recalls only missing one college meet. This past February, the Ferdons celebrated 10 years of Sylvia being cancer free. “Since my cancer, I definitely appreciate things more. I appreciate people more. I appreciate every day.”

In her time away from the hustle of college coaching, Ferdon loves to relax at her home in Baileys Harbor, dabble in flower gardening, shop for antiques with friends, and even play a little golf at Peninsula.

To the surprise of many that know Ferdon and have experienced her relentless work ethic, she is actually considering retirement from her helm at Baylor in the not-so-distant future. She says she would like to get back into teaching, similar to her time spent at Peninsula. Until then, she will put in long hours recruiting, preparing for her upcoming season and staying on the cutting edge of collegiate golf.

“Oh, we all know Sylvia will never retire!” jokes Doug. But what we can be pretty certain of is that her next path will involve golf, and that she will pour the same passion and commitment she has demonstrated throughout her life into her next big adventure.