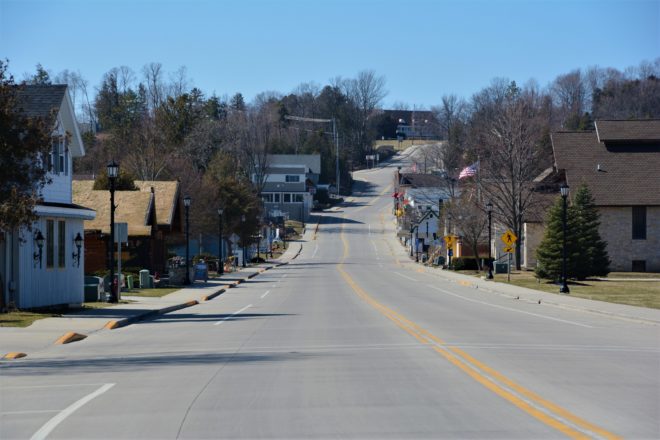 Back on March 15, as the COVID-19 virus spread in the country’s largest cities, we in Door County still hoped to keep the virus from spreading here. And if it was here undetected, we hoped to trace it and keep it contained. To do so, our worlds would be turned upside down: Schools would close; travel would be curtailed; businesses would lock up; and toilet paper – toilet paper! – would become a precious commodity.

Within days of the county declaring a state of emergency, Chris Hecht, the Sister Bay/Liberty Grove fire chief, gathered his fellow chiefs and formed the Emergency Support Coalition to answer questions, shop for groceries, deliver food and fulfill needs for people afraid to leave their homes.

I wasn’t surprised to see Hecht and his fellow chiefs step up – that’s what you expect them to do. It’s their job. But if we’ve learned anything in 2020, it’s to never take it for granted that people in leadership positions will lead when it matters.

Many at the federal, state and local levels froze, but others went above and beyond to help their neighbors get through the uncertainty in ways big and small.

During the pandemic’s early days fearful locals fired off on social media at visitors and second-home owners who flocked to the county seeking safety. From afar, the targets fired back at a seemingly ungrateful and unwelcoming community. It was getting ugly.

The county’s community coordinators stepped up to change the message, creating videos and campaigns telling people that the county would welcome visitors again when it was safe to do so. It was just the start.

Throughout the pandemic, the coordinators proved invaluable, serving as vital conduits of information from government to business owners and residents. They’ve helped to communicate the importance of masks and even made them. They’ve scrambled to create socially distanced events and decorations to brighten our days.

And two in particular – Pam Seiler of Destination Sturgeon Bay and Louise Howson at the Sister Bay Advancement Association – have been a vocal presence at public meetings, demanding answers and advocating for the business community to any official who will listen. Often Jon Jarosh, the public relations director at Destination Door County, has joined them in that effort.

The pandemic gave everyone an excuse – kids at home, fear of the virus, stress and depression – to do less, all of them valid. As the relatively new CEO of Door County Medical Center, Brian Stephens could have used those excuses and many more. He faced a crippling financial crisis at the hospital, the pressure of guiding one of the county’s largest staffs and the unprecedented decisions facing rural hospitals in the last eight months.

But he didn’t wall himself up in a silo. When the YMCA announced it would close the Barker Child Development Center, Stephens and the hospital stepped in to help facilitate a solution for Alexis Fuller and her team to reopen the center within months. He has lent his time and support to guide businesses in reopening. And he’s done it all with a calmness and clarity meant for the moment.

When the Republican leaders of the Wisconsin Legislature sued to overturn Gov. Tony Evers’ Safer at Home order, they offered no alternative plan or guidance other than to proclaim that the crisis was best left up to individual counties and municipalities. That left local Public Health managers such as Door County’s Sue Powers, and physicians such as Dr. Jim Heise of Door County Medical Center, to be the face of crisis management and the target of vitriol while those same legislative leaders undermined confidence in them at every turn.

Though their performance hasn’t been free of flaws, Powers and Heise have taken the difficult questions about the most controversial subject of our time in a more public fashion – and more often – than any local elected official has ever had to handle. The questions came from annoying media members such as this writer, from radio and TV, from irate residents and town board members, and from the public during regular Facebook Live sessions. They took them all, and when the only answer was, “We don’t know,” they were willing to say it.

On March 16, the Door County Board of Supervisors declared a state of emergency, and later that night, its chair, Dave Lienau, convened an emergency meeting of the Sister Bay Board of Trustees to do the same. At the time, the state was still waffling; school boards were discussing social-distancing measures while sitting side by side; and local bars and restaurants were still packed.

But that night, the Sister Bay board met with tables spaced 10 feet apart and a limited audience, and it put difficult questions on the table. Trustee and resort manager Rob Zoschke posed the most startling one. He leaned back in his chair and asked, “Should we be telling resorts to close down, and not accept reservations, and cancel existing ones?” That began a long slate of weekly meetings to keep Sister Bay and neighboring officials, business leaders and food providers informed on the state of play.

There were many others who aren’t paid to lead who nonetheless stepped into the gaping void left by others. Our community’s clerks pulled off three high-turnout elections – with never-before-seen numbers of early voting and constant changes in ground rules – while implementing pandemic procedures to keep people safe. Teachers relearned their jobs on the fly, transitioning to remote or hybrid learning while many tried to educate their own children or provide child care at the same time. Hundreds of our neighbors stepped up to sew masks, make sanitizer, or engineer new and innovative solutions.

And then there were the restaurant owners. They faced constant shaming and ridicule from some quarters just for being open and trying to pay their bills, and from other corners for asking people to wear masks, keep their distance and, well, care about other people. Many transformed their service entirely to keep people safe at great sacrifice to their bottom lines.

This year was awful in so many ways. But here’s to hoping that one day we can look back and remember the people who stepped up, who became leaders. And maybe in 2021, some of the people we pay and elect to lead will do so once again.