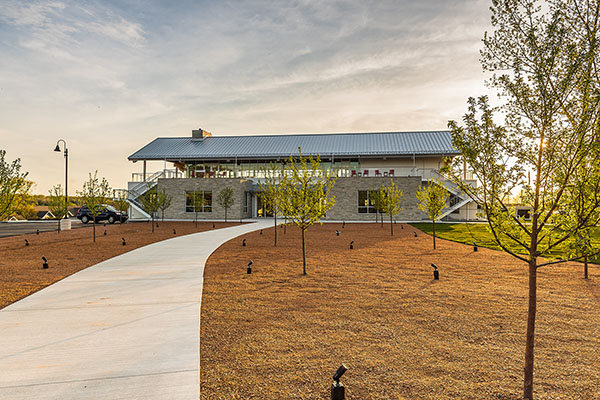 The new Kress Pavilion in Egg Harbor is a dramatic enhancement of public space that’s hard to fathom for one Egg Harbor native. Photo by Len Villano.

My first trip to the library was a short one, all the way downstairs from our family’s apartment.

In 1982, the Egg Harbor Library was housed in a space rented in my parents’ shopping complex, the Stagecoach Shops. Squeezed between a boat repair shop and a general store selling fishing poles, knick-knacks, and minnows, the library was essentially a cave carved into what was once the Bertschinger Feed Mill and Lumber Yard.

My vague memories of my first story time afternoons are of a dark room where we were shushed a lot, and ran our fingers along the metal rivets of the library chairs. Thirty-four years later those chairs were still in use at the library’s next location at the Bertschinger Center a quarter mile up the road.

I’m writing this now in a much different light than I experienced back then. I sit perched in an Adirondack deck chair on the sun-swept second story veranda of the Donald and Carol Kress Pavilion, the new home of the Egg Harbor Library. From here I can see the homes of the Point Beach neighborhood across the egg-shaped harbor, and the waters of Green Bay beyond.

Down below I see the lawn of the Cupola House, where I distinctly remember the embarrassment of running excitedly out the door with my bubble gum ice cream cone, only to promptly drop it in the grass. (I haven’t risked a cone since!) 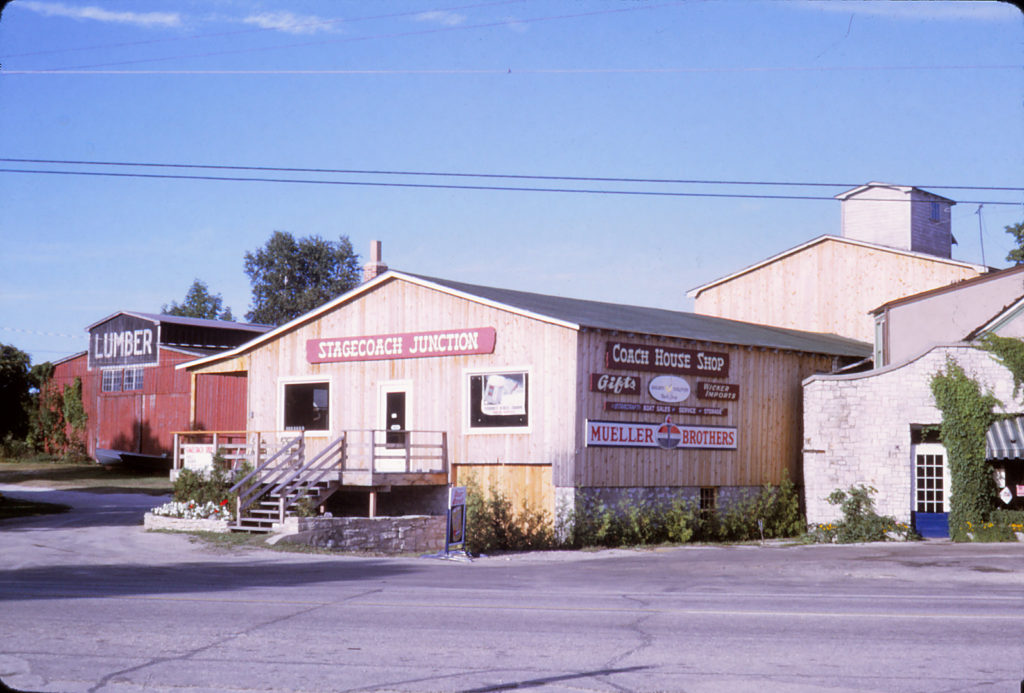 If I look over my shoulder I see the remains of the orchards we stole shirtfuls of fruit from, the hills we sledded down, both now dotted with condos and vacation homes, but still largely thick with green.

And on this June day, the village is as quiet as it always was, despite all the changes, the new shops, the growth of what, for Egg Harbor anyway, is a transformative spring.

Inside the library and its second-story community space are bathed in natural light through windows that blur the lines between inside and out. A man reads in the large lounge on the south end of the building, another surfs the web on the veranda near me. A business owner is interviewing a job-seeker in the business center downstairs in what may be the best remote office space on the peninsula. The children’s nook is packed with toys, books and movies, and a room dedicated to the village’s history offers photos showing how far it has come, yet how much remains the same.

The reality of this center existing in my tiny hometown of 201 people is still setting in. I didn’t think it was needed when it was first proposed, even with $5.5 million, the largest chunk through the generosity of the Kress Family, donated to make it happen. The mis-steps on the journey here – the purchasing and demolition of Lena’s for $350,000, only to abandon the location and sell the property at a substantial loss chief among them – were clumsy and avoidable, but it’s hard to quibble with the final product.

I’m prone to being critical of projects like this, often overly so, but I’m sitting on a public terrace overlooking the waters of my hometown, a view that was once afforded only to those who could afford it. In an era when our state is disinvesting in parks, schools and community spaces of all kinds, when our public assets like Eagle Tower, Potawatomi Tower and Rock Island fall into disrepair, my hometown boasts perhaps the grandest public space on the peninsula.

My nostalgia for my childhood story time is quickly fading, and as the 4th of July approaches, I’m thinking this would make a perfect spot to watch the fireworks.

The design of the Donald and Carol Kress Pavilion evokes the look of the Thordarson Boathouse on Rock Island. Photo by Len Villano.

The view from the veranda offers a glimpse of the harbor and bay. Photo by Myles Dannhausen Jr.

The second story veranda is accessible all day. Submitted.

Gathering spaces can be found in several areas of the pavilion. Photo by Myles Dannhausen Jr.

The children's room offers lots of games, books and a TV. Photo by Myles Dannhausen Jr.

A large reading room offers solitude on the south end of the library. Photo by Myles Dannhausen Jr.

The business center at the Kress Pavilion. Photo by Myles Dannhausen Jr.

Looking out from inside the great hall. Photo by Myles Dannhausen Jr.

Inside the great hall. Submitted.