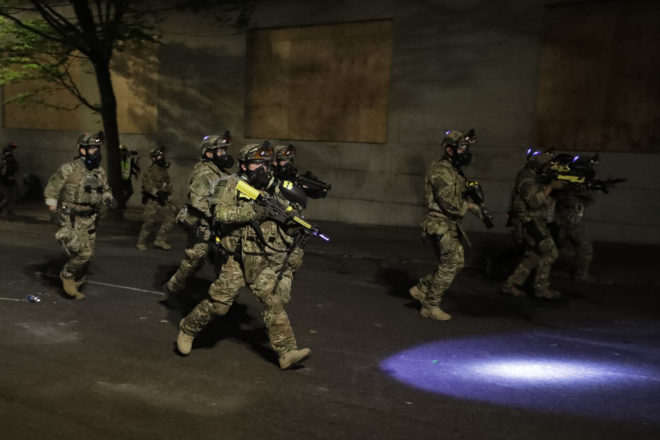 Here in Door County, it’s easy to become detached from the issues that plague our nation. I’ve heard many say they vacation here precisely because of the ease of oblivion that Door County provides. As a resident, it would be easy for me to succumb to that, but as a dissident, a journalist and someone who cares about the future of our democracy, I have become deeply concerned about what is happening in Portland, Oregon, and across our nation.

Federal agents have been deployed to Portland by President Trump in an attempt to quell Black Lives Matter protests that have been persistent since the May 25 police killing of George Floyd in Minneapolis. The actions of these federal agents have been characterized, according to reports, by the use of large quantities of tear gas, close-range firings of rubber bullets, and seizings of demonstrators and journalists by officers in unmarked vehicles.

Why does all of this matter?

I am facing the reality that our rights to protest and share information are under attack. We are living in the midst of the normalization of martial law. Arresting dissidents is not what happens in a democratic, free country. And if it could happen in Portland, who can say that it couldn’t happen to peaceful protesters here?

As someone who has an entire life ahead of him, I fear that if what is happening in Portland comes without consequences, my generation’s right to act in dissent will be jeopardized. In addition to being a young person, I am a young journalist. It hadn’t seemed to me that journalism would be an overly – or overtly – dangerous field to go into, yet seeing assaults on reporters in Portland just for shooting footage and asking questions, the notions I had about my field of study are changing. It makes me fearful about my safety in sharing information, but more broadly, about the sanctity of our democracy.

In the Declaration of Independence, Thomas Jefferson repeatedly cites that when a government inflicts harm upon those exercising their rights, it is “the Right of the People to alter or to abolish it.” This has been evidence enough to me that we, as a people, need to do something about this attack on our rights.

In Portland, residents are doing something about it. A group of women at the protests – clad in yellow apparel, bike helmets and goggles – calls itself the “Wall of Moms.” They link arms to form a protective barrier between law-enforcement officers and protesters, displaying their foremost maternal instinct: protection. The mothers have faced the same forms of assault as the demonstrators, many of whom are their children, yet they continue to take to the streets in large numbers each night.

Several dads have joined in protecting protesters as well, using leaf blowers to blow tear gas back at federal officers.

Participating in the Portland “war zone” has become a literal family affair. It also needs to be a family affair in the sense that as Americans, we are all part of a family. Portland has come together to say that federal attacks against American citizens exercising their right to protest is contrary to our ideals as a country. Residents of communities nationwide need to stand in solidarity with the people who are risking their lives each night to fight for these rights. No community – not even one such as Door County – can be exempt when our rights as a national community are so patently under attack.

To begin college, I will soon be moving to Chicago, one of the cities into which Trump has called for the deployment of federal troops. I will have to take a mask not only to protect myself and others from the spread of COVID-19, but also to protect myself from potentially inhaling tear gas. Along with my clothes and belongings, I’ll be packing a life vest and bike helmet for protection in case I have rubber bullets shot at me.

Am I afraid? Of course I am. However, I know that it is my moral and civic responsibility to stand up for my rights as an American and to protest when something is unjust. Please know that it is yours, too.