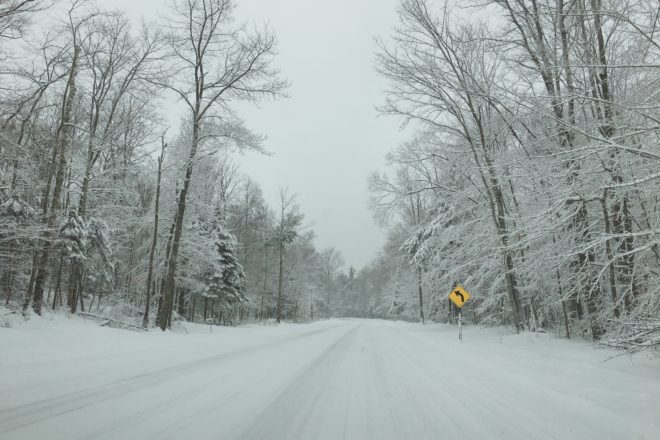 Before my first winter in Door County began, I was told that it would be rare to see even a few cars on the road. That made me nervous, to say the least. I’ve found that although that observation (or warning?) is true, it’s not to such an extreme extent.

I thought I’d take a moment to address the positives and negatives of living in Door County in the winter from the perspective of the newcomer that I am. I may reevaluate my thoughts after a long February, so tune in for a follow-up later in the month.

Upon my move to Door County in May, I was returning to a group of friends I had made both in Madison during college and through living here the summer prior. I was delighted to hear that most of the crew would be staying into the winter, too.

As a result, much of my winter has been full of those cherished hang sessions from the summer and fall, just with different activities. Instead of hitting Pebble Beach after work to catch the sunset or gathering at Camp David late on a warm weekend night, we’re hanging out in people’s kitchens to cook family meals or playing cards around a table at the AC Tap. Lots and lots of cards, and lots and lots of AC Tap.

It’s probably safe to say that I go to the Tap two or three times a week, especially if I’m in town on the weekends. There’s nothing that can beat  a $2 Budweiser on tap, plus it’s nice to see a familiar, bustling crowd on Mondays for Wing Night.

To my surprise, I’ve also had multiple opportunities to work off those calories by getting back into exercising. I shocked myself by joining an indoor cycling class through Indoor Active in Fish Creek and a broomball league through Husby’s!

It’s true that our team sucks (we’ve lost every game), but for a group of people who’ve mostly never picked up a stick in our lives, we’ve done pretty well. Plus, Matt Stone has been welcoming and encouraging to all of us newbies. If I had to give myself any advice for playing again, I’d recommend wearing elbow pads and shifting my ratio of beer to water (drink more water!).

In addition to carving out time to exercise, I’ve been able to take more time for creative endeavors such as music: songwriting, upping my social-media presence and trying to learn to record my own music.

(Excuse me while I nerd out: This effort has been great, aside from the fact that I don’t know how to operate the built-in USB audio interface in my mixer with GarageBand. If anyone’s willing to teach me, reach out at [email protected].)

And finally, the snow. I’ve never said this before in my life, but I’ve truly enjoyed the snowfalls we’ve had. There’s something so beautiful about the fluffy-looking trees and hiking in the middle of a blizzard. Although it’s mostly annoying, I’ll also admit it’s kind of fun to shovel in the morning, even when I have to scramble my way out of the driveway.

I would also like to extend a shout-out to my boyfriend, who moved up here from Madison in January to brave the dead of winter with me. I’ll say it: It really is nice having someone to snuggle with during this slow time of year.

The Negatives: Roads Are Scary, Everything Is Closed

Of course it would be nicer to wave off some of the negatives, but they might be worth mentioning. The first thing is how the weather can turn from being really cool to not so fun. I returned to Door County at about 3 pm on the Sunday after Thanksgiving to find that our power in Baileys Harbor had gone out. After a rather sketchy drive up from Sheboygan, it wasn’t news I wanted to hear.

The power was out until 10 pm that night. My roommate and I had some tealight candles, but other than that, we sat in the dark and cold for seven hours. The only thing to do was lie in bed to try to warm up. Plus, I had no groceries aside from things that had to be cooked, and our stove and oven run on electricity.

When the power finally came back on, we were laughing and yelling for joy. I ate a whole box of macaroni and cheese to celebrate.

This next point will come as no surprise, but I’ve had a bit of a tough time adjusting to so many places being closed or closing really early.

I understand that after a grueling summer season, our customer-service friends need a break in the winter. But why does everything that is open have to close between 5 and 7 pm? It’s hard to get to the grocery store when you’re done with work at 5 pm, and the store closes at 6 pm, with a 15-minute drive in between.

I’ve also shown up to several places that say “open” on the Google search page, only to find them closed not just for the day, but for the season. Perhaps that’s on Google – or on me for not digging further into the websites – but it’s an unfortunate waste of gas.

That’s it for my negatives list, and even those few things make me feel like I’m complaining. I thought this winter would be hard to get through, but so far being surrounded by friends and the beautiful, snow-covered natural world is making it fly by.