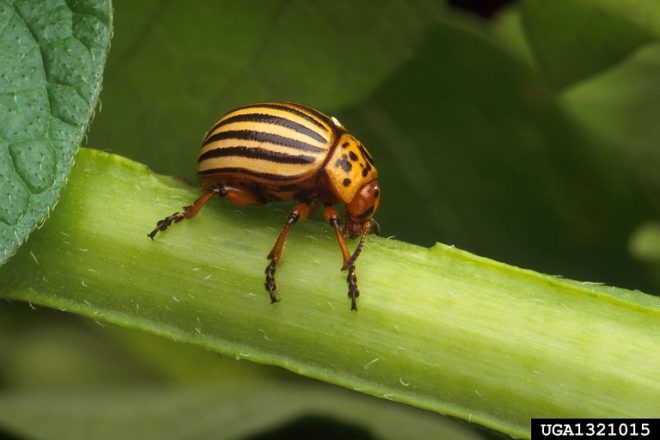 When choosing how to control a garden pest, it can be very overwhelming trying to sort through all the options to find something that will meet your needs. However, before you even pull a trowel off a shelf, head to the store to buy an insecticide or stir up some homemade concoction that your neighbor swears will work, you first should take a step back and figure out:

Obviously the answer to these questions will vary greatly depending on the pest in question. To guide you on this process, throughout the winter, I’ll highlight some common pests so that you can be fully prepared to deal with them come spring.

If you have ever grown potatoes, you will be familiar with the Colorado potato beetle, Leptinotarsa decemlineata (Coleoptera: Chrysomelidae). As its common name suggests, it is a devastating pest of potatoes, but it will also eat other closely related plants including eggplants and tomatoes, and some weeds including nightshade, groundcherry, and jimsonweed. In the garden, if the Colorado potato beetle isn’t controlled it has the potential to eat all the leaves off its host plant, leading to significant yield losses and plant death.

The Colorado potato beetle (CPB) is a distinctive round beetle approximately 3/8 of an inch long with a yellow body and black stripes running length-wise down its back. The beetle’s head is orange-ish with black markings. Female CPB can lay up to 500 yellow-orange eggs in small clusters on the underside of leaves. Eggs hatch after four to nine days. Larvae go through four stages, called instars, where they molt in between each stage. In the first stage, the larva is the size of a comma and brownish-black. Larvae in the other three growth stages are more of a blob-shape with a reddish-brown color and black spots along their sides. Each successive stage is larger and will consume more and more foliage. The mature larvae will be about the size of a pea. After they have reached their full size, they will drop down to the soil and pupate. Ten to 14 days later, adult beetles will emerge and continue feeding. CPB goes through two generations each summer. 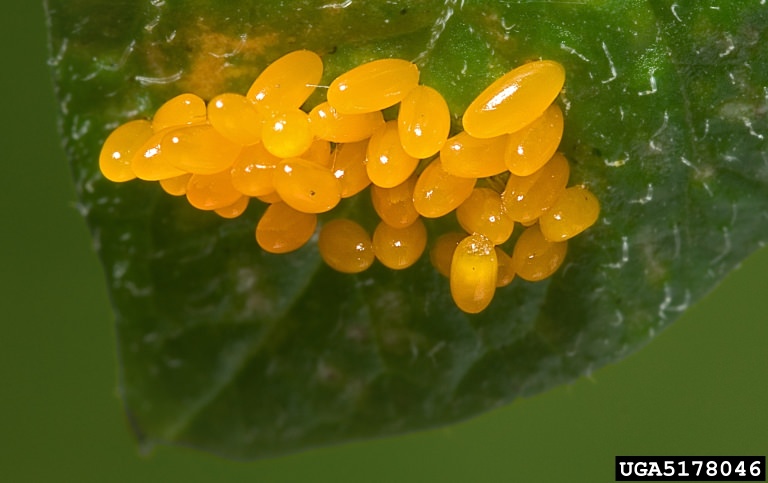 CPB overwinters as an adult beetle. In the fall, they walk to the outer edges of the field and dig down into the soil. The beetle is partially protected from the cold by being underground, but it also enters a phase called diapause where it essentially shuts down most of its biological processes. To keep from freezing, the beetle can also produce internal anti-freeze, very similar to the compound that is used as antifreeze in a car or airplane. Since the beetle overwinters as an adult, as soon as temperatures warm in the spring and potato shoots start to emerge, the adult beetles will be the first stage spotted on your plants. You may see adults out on your potato shoots, or you will start to see the yellow-orange eggs on the back of leaves. A week later, larvae will start to hatch. Since each female can lay so many eggs, the later you wait to control the population, the larger it will be and the more damage you will incur. Therefore, it is important to start checking your potato plants for adults or eggs first thing in the spring. Potato plants can tolerate some damage, but at flowering even as low as 5-10 percent defoliation will cause a yield reduction. After flowering, the plants can tolerate up to 30 percent defoliation. However, be aware that the beetles can eat a lot, so what may seem like minimal damage one day, could quickly spiral out of control. 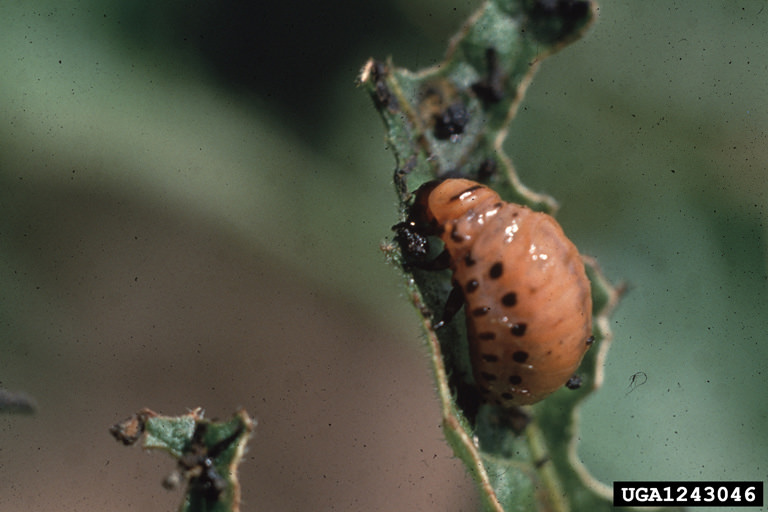 In the home garden, treatment options for CPB vary based on the size of the potato patch. For a smaller patch, the best method is to pick off the beetles by hand and put them into a dish of soapy water. If you are checking for them early and often, you can greatly decrease the number of beetles. Any eggs or larvae that you come across should also be destroyed. Make sure to wash your hands after handling adult beetles, because they contain a substance that can irritate sensitive skin. Since the adult beetles overwinter on the edge of the field and then walk into the crop in the spring, another option is to build a barrier or dig a trench to keep them from reaching your new crop. Trenches 18 inches deep and 18 inches wide lined with plastic can trap the beetles. Trap crops and row covers can also work. If you choose to go the route of using an insecticide, beware that CPB are resistant to most insecticides, so even though the label might say that it will work, many are no longer effective.

In Wisconsin, many of the CPB populations are resistant to carbaryl (Sevin) so this product likely won’t work. Bacillus thuringiensis var. tenebreonis, a naturally occurring soil-borne bacterium that is harmless to people, animals, and plants, has shown to still be effective against CPB. When buying this product, however, make sure to purchase Bt var. tenebreonis (Btt) and not Bt var. kurstaki (Btk), which is more commonly available. Btk is only effective against caterpillars (moth and butterfly larvae) and will not have any effect against beetle larvae. Timing is critical for insecticide applications, because small larvae are most susceptible. Applying a product when the beetles are pupating or directly to large larvae or adults, will either have no effect or greatly reduce the efficacy of the product. If populations reach levels that are too high to control, the best option is to plant something other than potatoes, eggplants, or tomatoes, for a year or more, along with removing any weeds that the beetles might also eat.

If you’d like more information on how to control the Colorado potato beetle, check out publication A3678 at the UW-Extension Learning Store (learningstore.uwex.edu) or stop by the Door County Extension office.