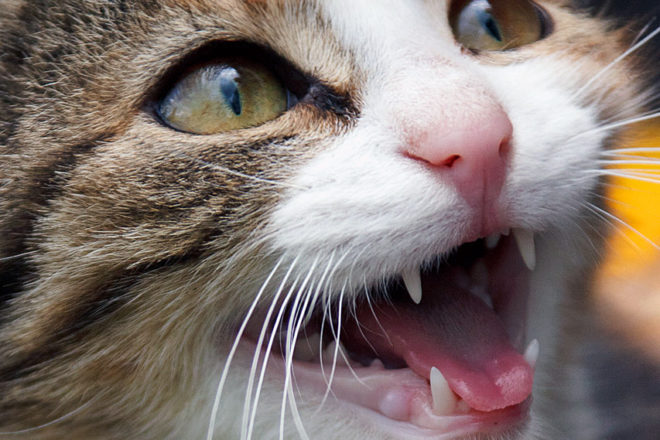 We all know cats meow, but did you know adult cats don’t meow to each other? They only meow to communicate with their human servant.

People think of it as an absolute classic cat behavior, but it’s something they have learned to get our attention. Anybody who was ever been owned by a cat knows what that early morning meow means – “Feed me, and feed me now.”

Many cat parents have become excellent interpreters of their cat’s meows. They know by the specific sound whether it’s a request for food, play, affection or to be left alone.

So how did cats figure out how to meow and get us to listen?

When they are kittens they meow to let their mother know they are cold or hungry, but once they get a bit older, cats no longer meow to other cats. Felines communicate with one another through scent, facial expressions, body language and physical touch.

Cat-to-cat vocalization tends to occur more often in hostile situations where a growl or hiss is needed to keep another cat at bay.

Since we don’t understand their scent messages and most of us are not entirely fluent in cat body language, cats had to resort to a different way to communicate with their humans. Because cats are dependent on us, they have learned meowing gets them what they want, just like when they were kittens with their mother.

Cornell University researchers tested whether we could understand our cats or if we were taking environmental cues to figure out what they are saying. People listened to recordings of 12 cats meowing in five different every day scenarios to try and tell what it was they were saying. They could determine what the meows meant, but only when the sounds were coming from their own cat.

This proved there is no universal cat language but that felines are teaching us their own commands, unique to them and their owner and meaning little to outsiders.

It’s heartwarming to think your cat has learned a special language to communicate with you not only out of necessity but fondness because of a special connection the two of you have.

Sally Salopek is the owner and operator of Attend-A-Pet pet sitting services in northern Door County. She has also worked professionally with animals in health care, pet grooming, training, wildlife rehab and rescue. Send your pet-related questions to her at [email protected].