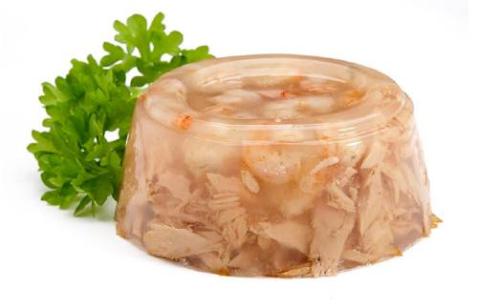 This gourmet British cat food is called Applaws Layers and is said to “combine two all-natural ingredients into a single great tasting dish. A base layer rich in Tuna is topped with an exciting garnish of Prawn. It’s then enveloped in a soft natural jelly so that the layers are revealed as the dish is served.” No doubt making Kitty say Yummy!

Q: Is it okay to feed my cat canned tuna? She sure loves it and never turns her nose up to it like she does with other foods.

A: When we think of what cats like to eat, one of the first things that comes to mind is tuna. Cats seem to love it even though it is not a typical meat a feline would eat. Tuna are deep sea fish, not something they would even encounter in nature.

The reason cats respond so favorably to tuna fish is unknown. So, regardless of why your kitty loves tuna so much, you will need to resist giving in to her cravings too often for a number of reasons. Studies have shown cats fed too much tuna have had health issues.

If your feline is eating more tuna intended for humans than cat food, there is a risk for malnutrition. Tuna does not contain the variety of nutrients she needs such as vitamin E, copper, iron, calcium and taurine.

Tuna fish has been discussed as a health risk for humans because of the mercury it contains. There have been daily and weekly limits of consumption for humans, especially pregnant women. Too much tuna for your kitty’s tiny body can cause mercury poisoning. This can lead to problems with the central nervous system, causing loss of coordination and balance, which make walking difficult.

Tuna contains high concentrations of unsaturated fats that are quite unhealthy for cats. It can cause a serious vitamin E deficiency, which can lead to a dangerous condition called “steatitis.” This is a painful disease where the cat’s body becomes inflamed.

Tuna is also high in minerals that can cause bladder stones.

Felines can also become addicted to tuna, whether it is packed for cats or humans, and once hooked they may start refusing all other foods.

Luckily most tuna cat foods are never 100 percent fish and are mixed with other nutrients your kitty needs in her diet, but be leery of feeding it exclusively. There was a study done that found felines who were fed too much canned tuna cat food had health issues. Not only did they have elevated mercury and selenium levels in their bodies, they played and vocalized less than those who ate beef-based cat foods.

A little human-grade tuna as a treat once in a while will not harm your cat, but as a steady diet can lead to malnutrition and ill health.