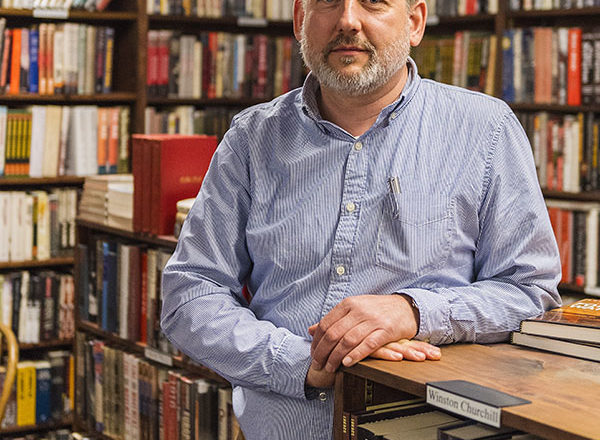 Peter Sloma of the Peninsula Bookman. Photo by Len Villano.

A decade ago, with the advent of e-books, prognosticators predicted the end of the printed book. And for a time it looked like the predictions might be correct; but after a rapid rise in sales through 2013, e-book sales have since leveled off.

Indeed, the number of printed titles being published each year from established publishing houses has actually increased each year for the past three years.

“The book is doing just fine,” said Peter Sloma, owner of The Peninsula Bookman in Fish Creek. “Bookstores are not.”

Despite his assessment, Sloma’s store has not only survived through some of the most challenging times the industry has seen, The Peninsula Bookman has thrived; due in large part to his understanding that running a bookstore is work.

“Bookselling tends to attract idealists and dreamers,” he said. “In reality, a bookstore is like any other business. You have to actually work to survive and be successful. I’m here [in the store] seven days a week from open to close.”

Sloma came to the bookselling business circuitously. After graduating from St. Norbert College in De Pere, he spent time teaching in Texas, worked for a business book company in Chicago, and explored graduate work before moving back to Door County in 1999.

In 2002, he found himself wondering whether opening a bookstore was an option.

“I had been collecting through the years and I had worked in the trade and I found myself wondering whether books were a business or a hobby for me,” he explained.

He decided he needed to find out. The Peninsula Bookman, featuring primarily used books, debuted in the Settlement Shops, just south of Fish Creek.

“I eased into the business without spending a lot,” he said. “As it turned out the location was a good place to get the experience I needed.”

By 2006, the store’s success led Sloma to look for a larger, more visible location, which landed the store at its present location on the north end of downtown Fish Creek, across from Nan & Jerry’s. At the time, The Peninsula Bookman was one of a number of bookstores in northern Door County, but Sloma said, “I never felt the competition [from the other stores], in part because there was almost no replication between my store and the other stores.” 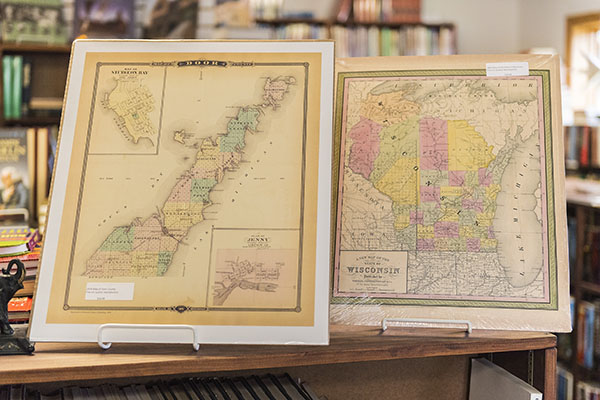 He acknowledges the impact of Amazon and online book sales on the industry.

“You can’t fight the internet,” he explained, “you just have to cede that ground.”

“Because I am a relatively small store my inventory is very selective,” Sloma said. “I want my inventory to be attractive so I put a Mylar cover on all my books and I don’t put anything on my shelves that I wouldn’t want to have in my home.”

While The Peninsula Bookman has something for almost every reader, the inventory is about 60 percent historical, including some rare regionalia, Western Americana, and — of course — plenty of Door County titles.

Through a partnership with Charlie Calkins, who runs the Badger Bibliophile booth in the Olde Orchard Antique Mall just south of Egg Harbor, Sloma began reprinting old maps that are high quality and more affordable than originals.

“There’s quite an age difference between Peter and I, but we have a mutual interest in out-of-print books and old maps and, because of that shared interest, the age difference just disappears,” Calkins said.

The impetus for the map business was largely one of supply and demand. “More and more of the maps people wanted were becoming scarce or unavailable,” Calkins said. “So we reproduce what we never have enough of in the original.”

To date they have reprinted nine maps, including a 1914 map of Gibraltar Township and a map of Door County from the 1878 State of Wisconsin Atlas.

Still, even with his carefully selected inventory and the sideline business of the map reproductions, many of Sloma’s customers wonder how his store survives.

“The clock moves in a different way in Door County,” he said. “At home, many of my customers may drive past a local bookstore twice a day on their way to work. When they are here, there’s no urgency or responsibilities. They come into my store and spend time browsing the shelves.

“I think, in many ways, they view the store as an anachronism — but a welcome one,” he added.

And despite his assessment that bookselling tends to attract “idealists and dreamers,” Sloma has a unique assessment of bookstores as institutions.

“When you stop to think about it, no other occupation indulges as broad a base of interest and knowledge,” he said. “In an age of specialization, where young people are more and more directed into specialized studies and careers, bookselling and bookstores are one of the last refuges for generalists.” 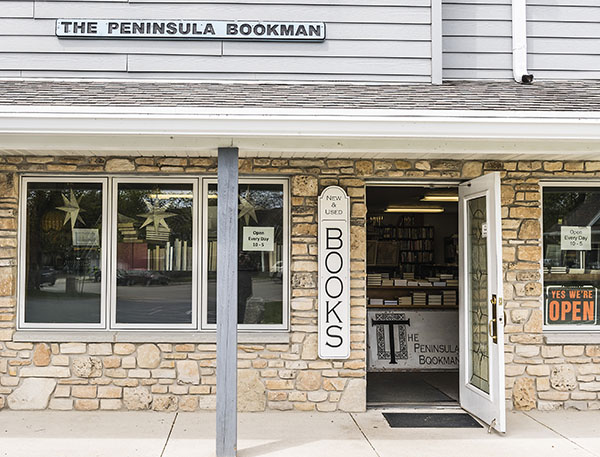 The Peninsula Bookman in Fish Creek. Photo by Len Villano.