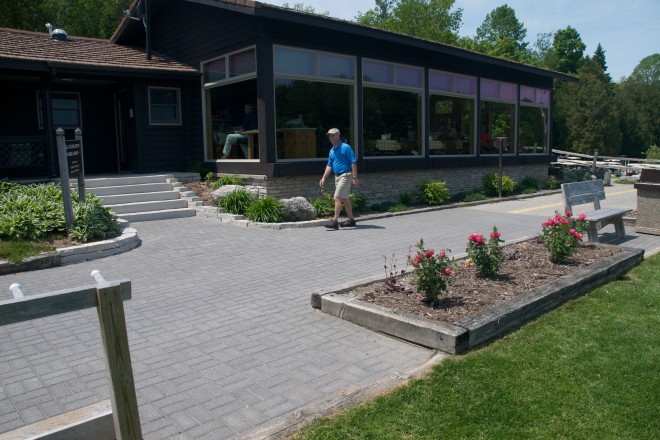 A $200,000 clubhouse renovation highlights changes at the Peninsula State Park Golf Course for 2009. While the course itself traditionally receives the lion’s share of improvement dollars, this year’s clubhouse transformation represents the building’s first major upgrade in 20 years. 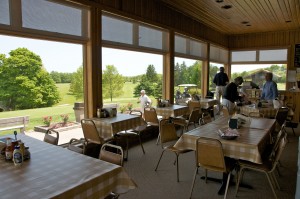 One of the first things golfers will notice is the new stone entrance steps and ceramic tiled porch, which replaced an aging wooden deck. The most dramatic change is the bank of picture windows in the newly carpeted clubhouse. Golfers waiting for a tee time or grabbing a bite from the restaurant will now have a clearer view of the course, Eagle Harbor and the Village of Ephraim.

“Peninsula is known for its spectacular vistas, so the new windows really showcase one of our greatest assets,” says Chris Bungener, president of Peninsula Golf Associates (PGA), a non-profit group that has managed the course since 1982.

Other sweeping phase one changes to the clubhouse include a new roof, redesigned entrance foyer, remodeled bathrooms with skylights, new flooring in the dining and pro shop areas, and upgraded vents, lights and fans throughout the building. Another $100,000 has been allocated for phase two changes, still in development, that are slated for 2010.

On-course improvements this year are more subtle than the creature-comfort-driven clubhouse makeover. The bunker repairs, complete with copious amounts of sand, have been finished on holes one, three, five and seven. New cart paths, golf hole name plaques and tree plantings have been sprinkled throughout the course. In keeping with the course’s focus on the picturesque, there is now an open view to the water from the 11th green.

Strolling down one of Peninsula’s lush, tree-lined fairways, it’s hard to imagine how the course appeared before the PGA’s involvement. Older golfers recall, not always so fondly, the sun baked fairways, postage-size tee boxes, bunkers sans sand, bare-spotted greens, unreliable carts and six-hour rounds. The area’s natural beauty and dearth of golf courses at the time kept Peninsula in business, but the long-term outlook for success was in doubt. 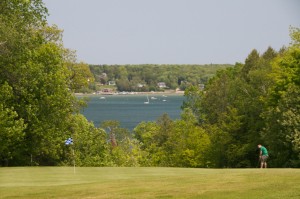 Despite golf’s growing popularity, the average number of rounds played at Peninsula from the 1960s to 1970s only increased from 36,600 to 36,848. That’s when a group of proactive golfers rolled up their sleeves and formed the PGA. The group convinced the Wisconsin Department of Natural Resources (DNR) to put in a watering system and, equally as important, allow them to manage the course. Today, more than 50,000 rounds are played annually at Peninsula and its future is secure as one of the most popular Door County golfing destinations.

“It’s really a great example of cooperation and what can be accomplished when citizens and a government agency work together,” says Wally Klepp, a past PGA president and one of its original 22 founding members. “The DNR did not have the expertise to run a golf course and our involvement costs them nothing because we are volunteers. It has been a win-win situation for both parties for many years.”

Under the agreement, the DNR receives an agreed upon percentage of revenues each year, while the remaining funds are plowed back into course and building improvements, golf carts, equipment such as mowers and rollers, worker salaries and more. Because the course is located in a state park, there is a misconception that renovations are funded by taxpayers. Other than the special appropriation of $240,000 that the DNR received from the legislature for the initial watering system in 1981, all capital improvements to the course and clubhouse over the last 28 years have been paid for by the funds generated by the PGA.

Amenities add to the golfing experience

Peninsula is one of the few courses in Door County that operates a driving range and practice facility. Prior to their rounds, golfers can putt, practice bunker shots or hone their skills with irons and woods. The PGA recommends golfers take a few minutes before their rounds to hit a small bucket of balls, as warming up on the practice range is always better and less stressful than warming up on the course in front of other golfers. The driving range, which stocks practice clubs, has become a favorite with families looking for an inexpensive diversion. 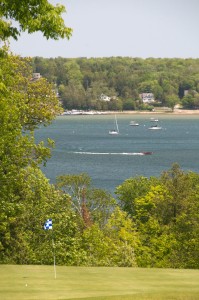 The restaurant at the course serves breakfast and lunch, with oversized sandwiches, hot dogs and brats also available at the turn. Restaurant manager Chris Orsted’s famous hefty cheeseburger with grilled onions has become, arguably, the best burger in Door County. But you don’t have to be a golfer to enjoy the fare, as the restaurant is open to the general public and a park sticker is not required. If you forget your hat or are short a sleeve of balls, the pro shop in the clubhouse is well stocked with golfing necessities.

Tom Wagner, a resident of McFarland, Wisconsin, travels to Door County each June and September for a mini-vacation. He enjoys playing golf at the park while his wife Gloria gravitates toward the plethora of galleries and gift shops that dot the county. “I think Peninsula is one of the best vacation values in Door County,” says Wagner. “The course is always in great shape and regardless of how I’m playing, I enjoy the scenery and the people I hook up with on the course. The back nine is simply stunning.”