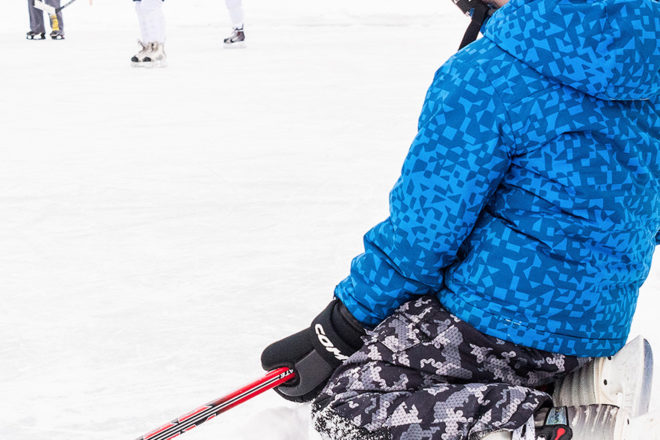 Little boy watching his dad play Pond Hockey at the pond hockey tournament on Kangaroo Lake. What I loved about this shot is you can picture what the boy is dreaming about – being a hockey player just like dad. 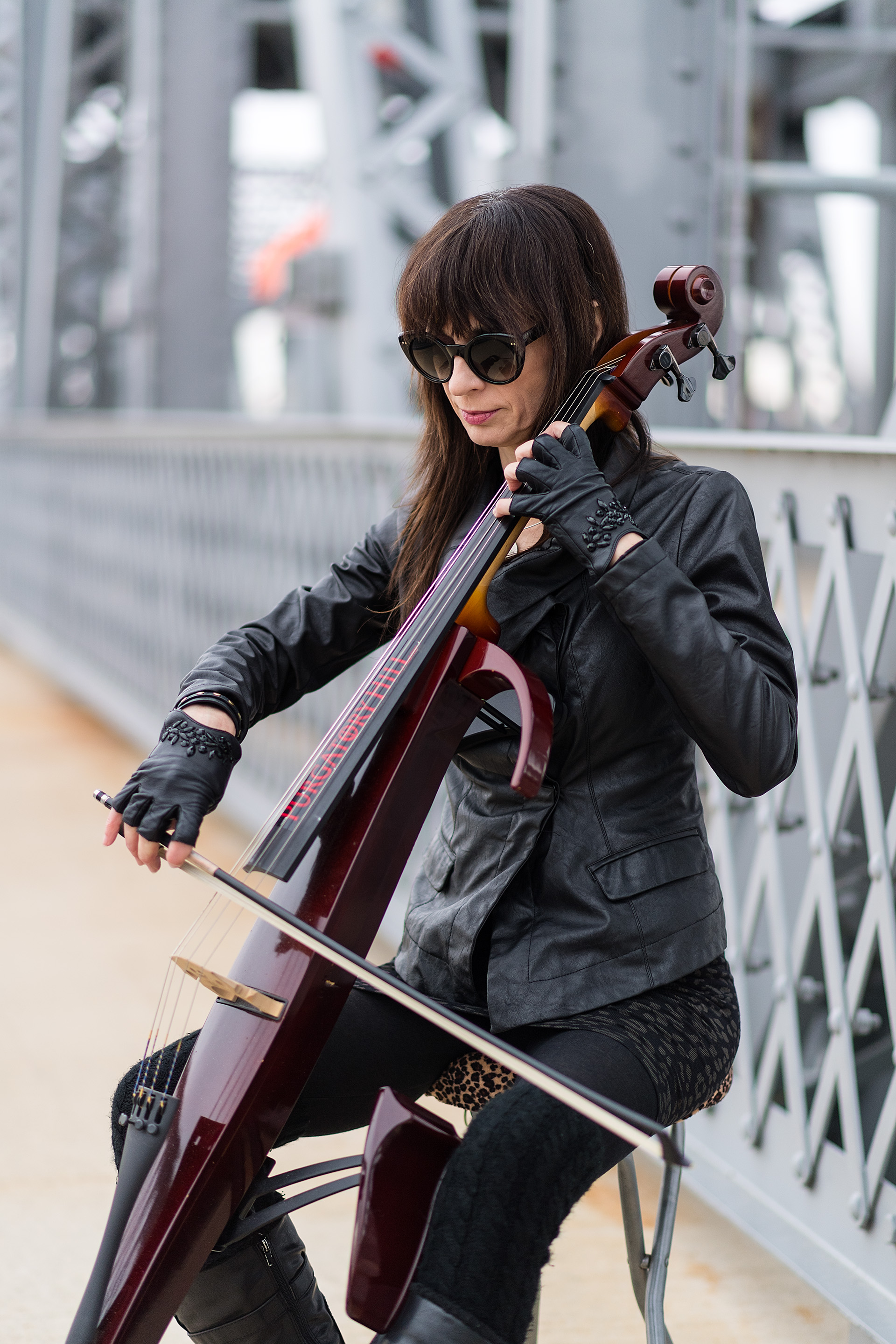 Melaniejane playing her cello on the old steel bridge. I loved this picture because it a quiet moment with melaniejane and her cello. With just a hint of the old steel bridge she helped to preserve and she has been a driving force in the Steel Bridge Songfest. Sometimes you only get one photo to tell the whole story.

I chose this photo because it shows the scale of trying to BBQ an entire steer at once for the annual BrewVino Steer Roast in Algoma on Saturday, June 10, 2017. The owners of von Stiehl Winery had to climb on top of the BBQ pit and mop on the sauce, showing how large an operation it actually was.

I was fortunate enough to get to photograph at Door Shakespeare this summer. I have been hoping to photograph there for a long time so I was very excited. I like how the actors naturally set up in the perfect compositional triangle like those used in many famous paintings. And the expression on the face of singer Colin Morgan makes the photo. The production is Twelfth Night.

People often comment that my photos look more like paintings than photos. That’s not an accident. I follow many of the techniques and guidelines that artists follow. This photo has those qualities. Light, composition and it tells the story. Two mowers – one fast (tractor) and one a bit slower (sheep). Lotto’s Lazy Acres Farm and site of the Roots Revival Education and Jam Festival in Algoma, Wisconsin.

I traveled down to Kewaunee for the Farm Technology Days last summer. The entire event was a lot of fun. Kewaunee County and the Ebert family did a great job of hosting. In this photo from the Mounted Justice Cowboy Show, a participant has to navigate through an obstacle course while firing a gun and shooting balloons at the same time. Plus it was a timed event. I was amazed at how in control the horse and cowboy where.

Capturing the decisive moment is what photographers strive for. Here the image captures the moment when the horse picked up the baseball cap to hand it back to Dan James, who trains horses for movie sets. The interaction and trust between Dan and his horse was amazing. I caught up with them at Wisconsin Farm Technology Days at Ebert Enterprises in Algoma.

I love the Burning Cow Music Festival held every summer on the Door Devils Motorcycle Club grounds in Institute, and this year’s was the best ever. Three days of music that ends with the burning of a giant wooden cow. Top-notch bands like the Diemonds and Autograph finished off the festival. Here Simon Daniels, lead singer from the band Autograph (“Turn Up The Radio”), pauses with a look of pride and accomplishment to look out at the audience. The lighting was extraordinary and the expression just makes the image.

We traveled down to Algoma and Bill Schmiling’s Stony Creek Vineyard this past summer. I was very impressed with the vineyard and took many photos of the grapes and vines but when Bill turned to walk down one of the rows and his dog came charging in front of him, that was the moment I was looking for. 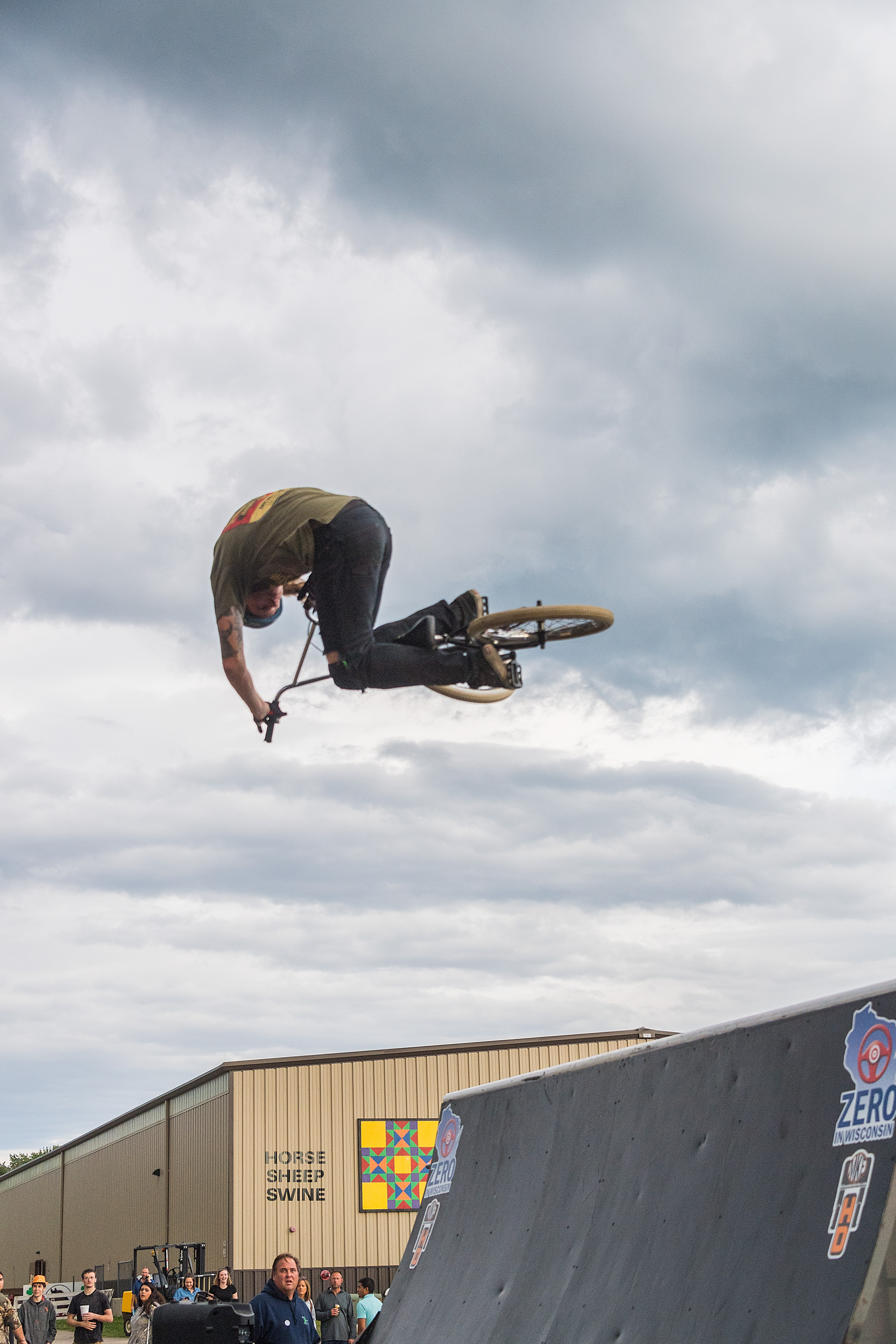 I was at the Door County Fair this summer and came across this stunt bike show. I was really impressed with the stunts they were doing close to the ground but when this biker went airborne high above the crowd, it was just amazing and I knew I had the shot.

Trying to wrangle pigs into a corral has to be one of the most difficult jobs in the world. Apparently pigs do not like to go where you would like them to go very often. We liked this shot because of the boys looking out the window at all the activity in the pen during the Door County Fair meat auction held Saturday, Aug. 5, 2017 at the Door County Fair Grounds in Sturgeon Bay.

This year’s fair was one of the most successful in a long time and it was a ton of fun to get to visit and photograph there. This image is just a tender moment between a family playing darts and trying to win one of the stuffed animals in the carnival section of the fair. 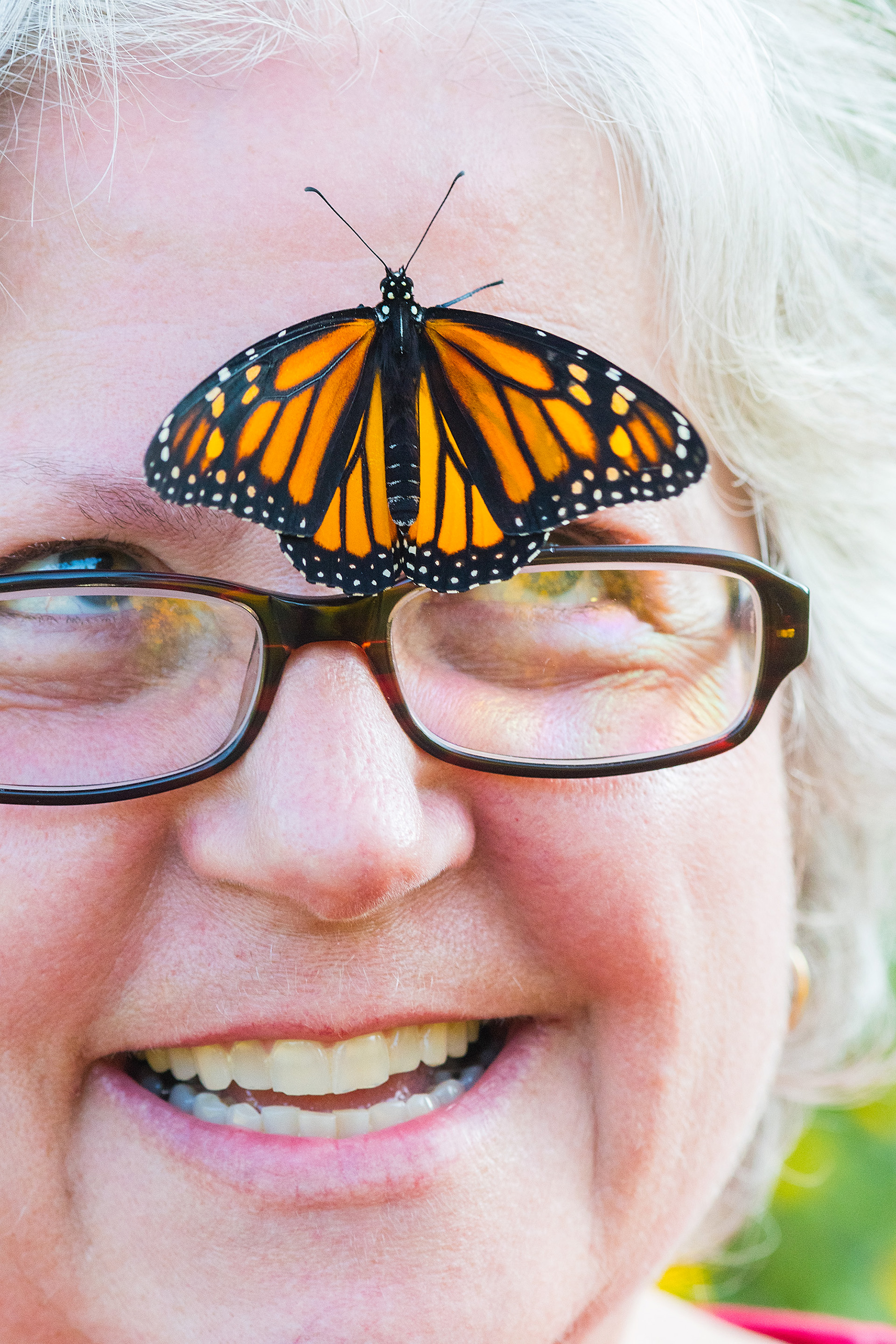 I was photographing the butterfly garden at Peninsula State Park when this lady, Holly Cole, Egg Harbor’s librarian, came along and all of the butterflies started landing on her. And I’m like, “Hey, I’ve been here for hours and none of the butterflies are landing on me.” Then this Monarch landed on Holly’s face and when she looked up I captured the moment. Holly plans to raise and release 50 monarch butterflies this summer.

The Blues on the Bay festival in Ellison Bay in late August is always a ton of fun but this year fez-headed Lil’ Ed totally blew everyone away with his virtuoso guitar playing and his antics. Here he left the stage and came out into the crowd to play, but when he knelt down and bent over backwards that was the moment. 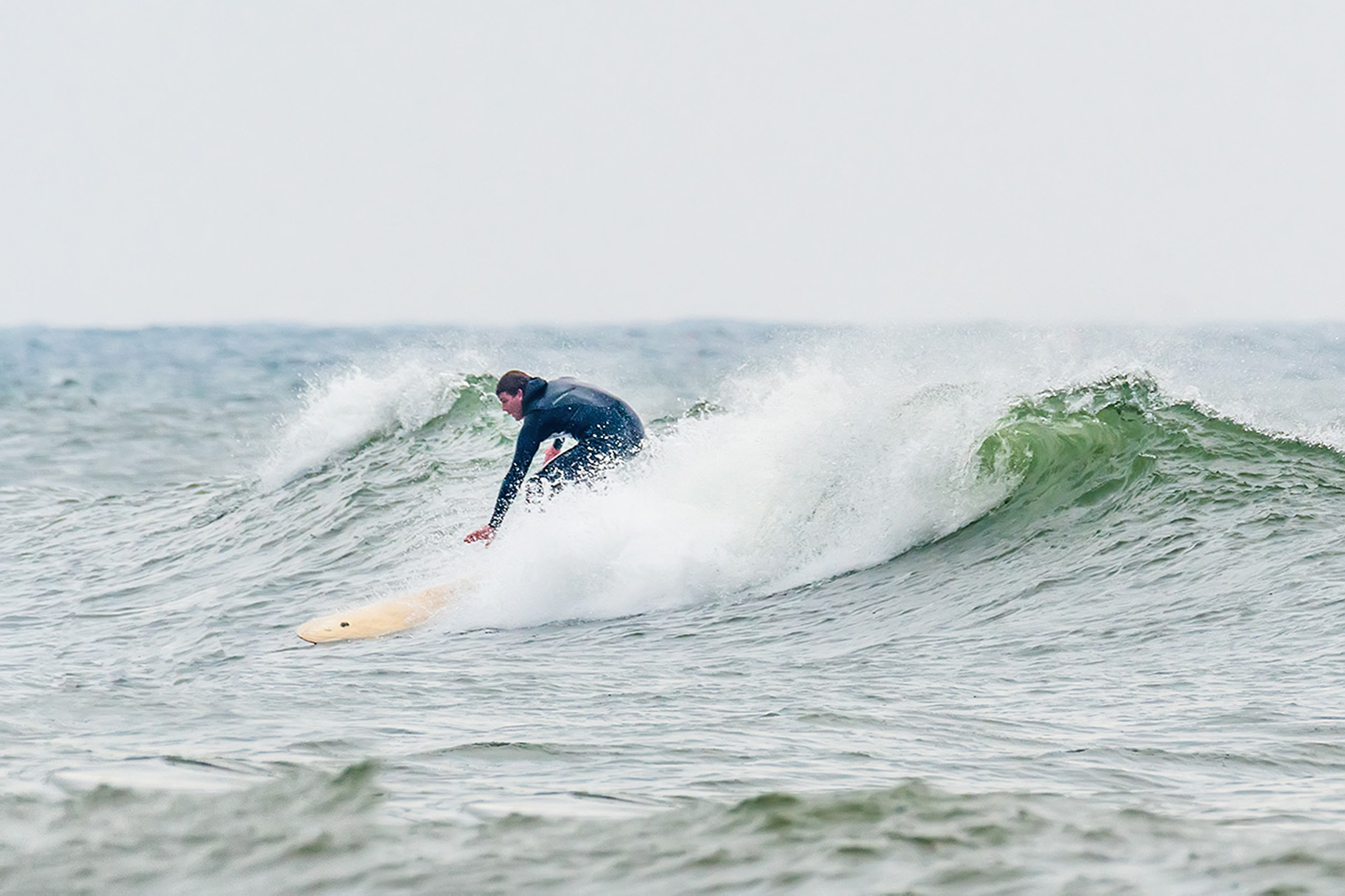 Surfer Ryan Heise catches a wave on Lake Michigan. It can take a lot of effort to get a decent photograph of a surfer on Lake Michigan. The conditions aren’t always the best, the locations can be challenging and the waves and surfers are very unpredictable, seemingly popping up anywhere. Standing on shore photographing I was wet, cold and my hands and feet where freezing so I can imagine how the surfers felt.

The fall in Door County is my favorite time of year to photograph, with spectacular landscapes and color to rival the best of the East Coast. So it’s always fun to find other people enjoying the autumn as well, like this group of hikers trying to navigate the corn maze at Schopf’s Hilltop Dairy in Carlsville. 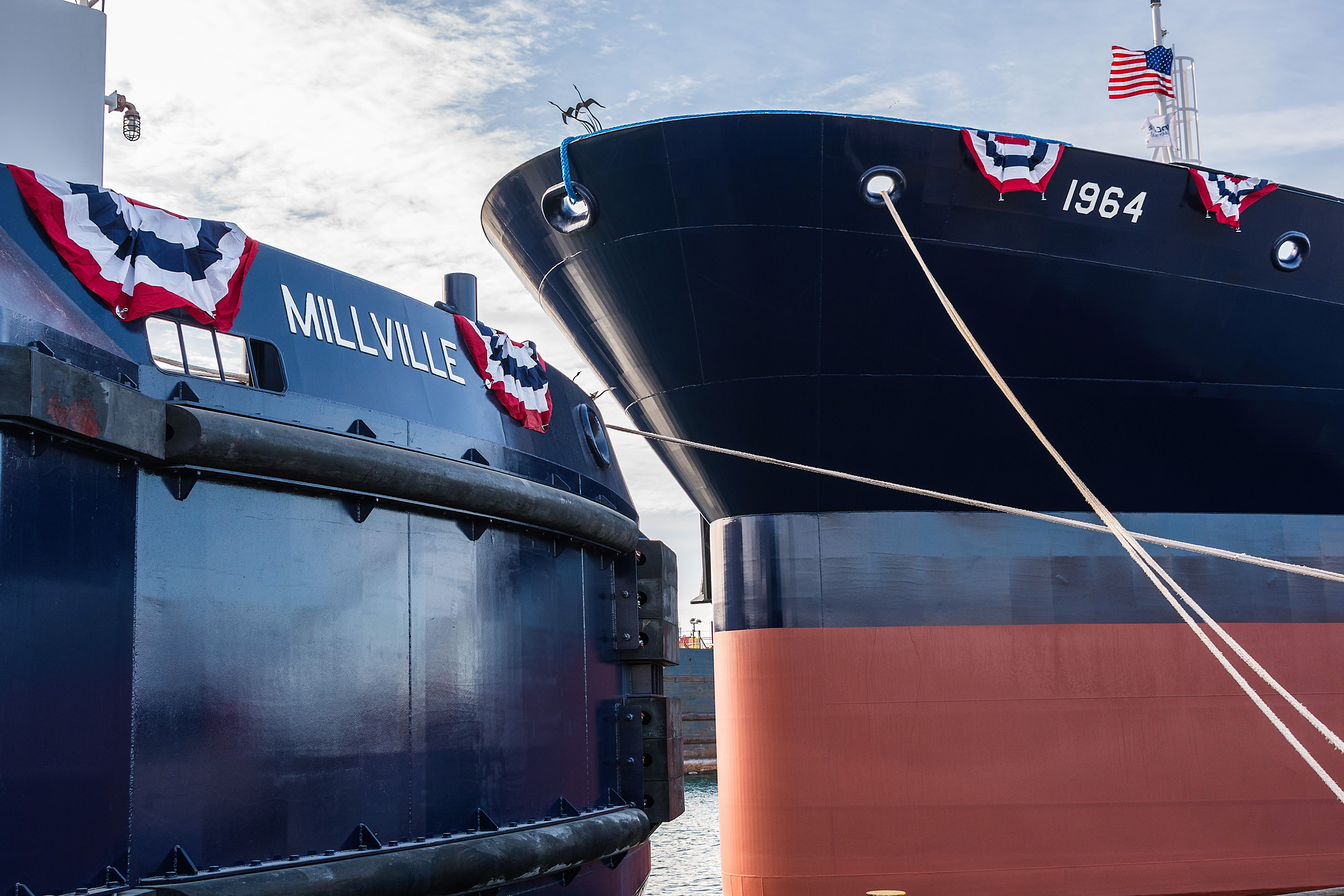 One of Door County’s best and most unique features has to be the waterfront and the big ships that dock here every winter. But we also build the ships. In this image two of the most recent Bay Ship projects – the Millville and the 1964 – were unveiled for the public. I am always captivated by the scale and majesty of the big ships and tried to capture all of that in this photo from Nov. 28. 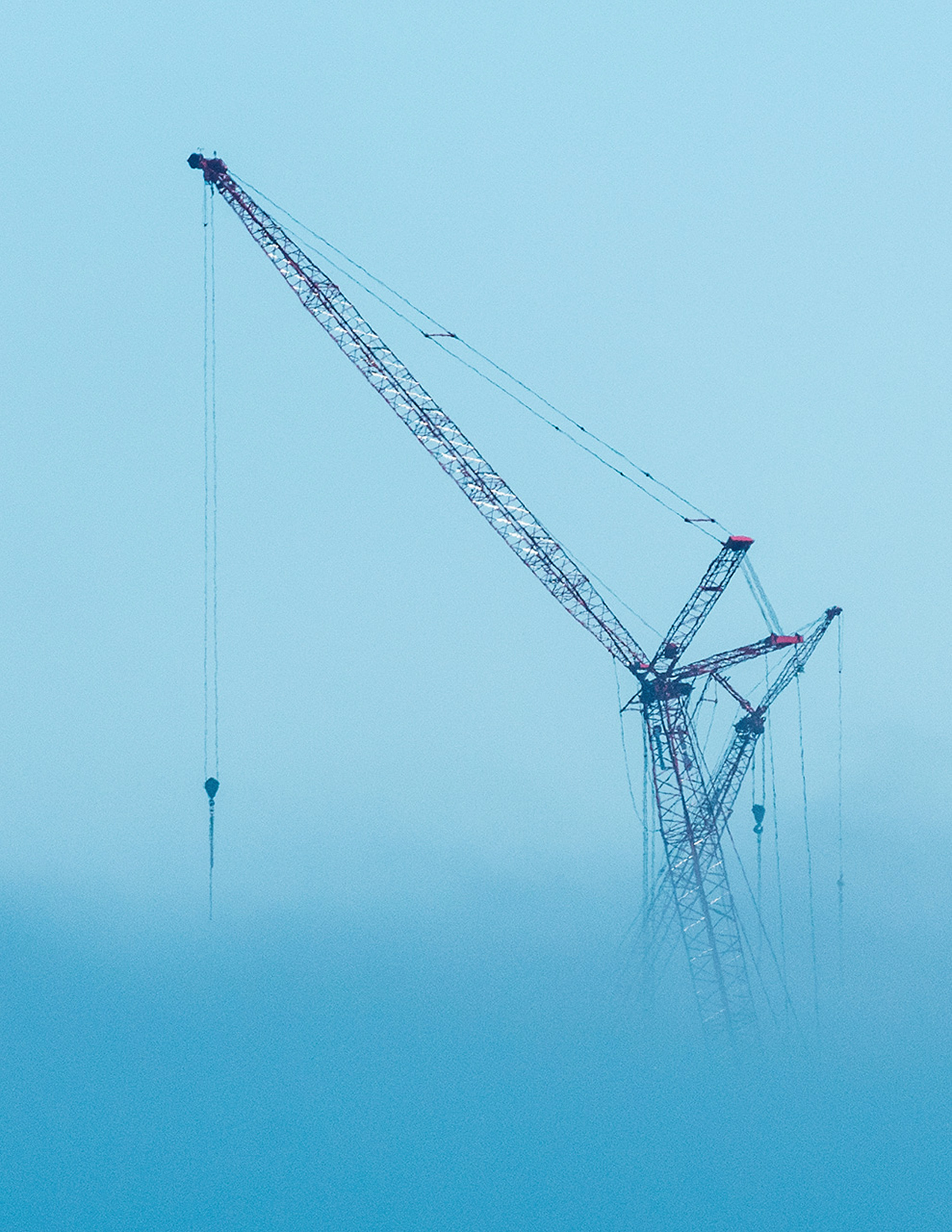 Work goes on all winter at the shipyards in Sturgeon Bay, building new ships and repairing old ones that have come into port for the winter months. I captured this crane rising up out of the fog one winter morning earlier this year. With the fog hiding the bottom of the crane it appears to be floating in midair.