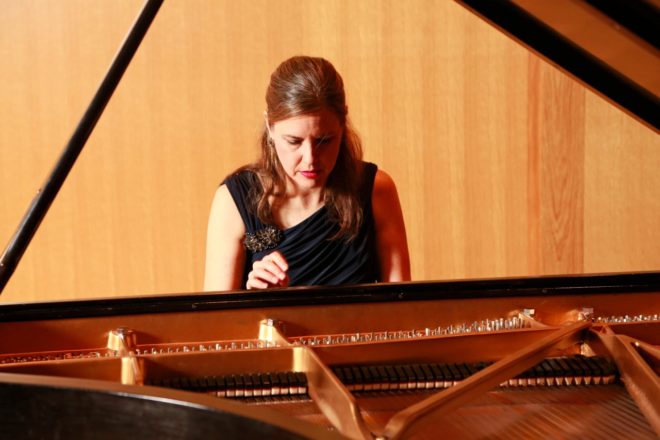 Classical pianist Kate Boyd will be in concert April 29 at the Unitarian Universalist Fellowship of Door County. Submitted.

She’s given recitals at Schubert’s birthplace in Vienna, at the National Concert Hall in Dublin and at the Musikhalle in Hamburg (where Strauss, Prokofiev, Stravinsky, Horowitz and Menuhin also performed).

And on April 29, classical pianist Kate Boyd will be in concert at the Unitarian Universalist Fellowship of Door County. The “joyful” program she will present, including works by Sofia Gubaidulina, Bach, Chopin and Prokofiev, will be a rare opportunity for local residents to hear the exact program she will perform on May 17 in a solo recital at Carnegie Hall. Kate is excited about the fact that Russian composers Gubaidulina and Prokofiev “bookend” the numbers of Bach, of whom Gubaidulina is a special fan. And she is thrilled to present the program in Door County, a mecca for the arts.

The daughter of Baileys Harbor summer residents Carol and Ken Boyd, Kate begged to begin studying piano at age four, after accompanying her older brother Doug to his lessons, then going home and playing the same songs in his books. “I’d previously taught them the notes and some simple pieces,” Carol said. By fifth grade, Kate was studying both piano and violin with teachers at Augustana College in Rock Island, Illinois (and flute through the public schools), performing as a soloist and accompanist at school and church, as well as in band and orchestra.

One of Kate’s most prized possessions is the piano in her home studio, a 1926 Steinway Model L, purchased at the estate sale of one of her early teachers, Regina Fryxell. Some years earlier, when Fryxell was nearly blind, Kate paid her a visit and, when requested, played some pieces by Chopin for her. “You play so well,” Mrs. Fryxell said. “You must have had a very good teacher.” “Oh, I did,” Kate responded. “It was you.”

She spent her senior year as a Rotary exchange student in Paderborn, Germany, where she continued to perform at school and in family ensembles. Because she was also interested in science, Kate enrolled as a liberal arts major at Carleton College in Minnesota, but knew after two years that “I had no choice but to become a pianist.” She transferred to Oberlin Conservatory in Ohio as a piano performance major and received her Bachelor of Music under the tutelage of Russian pianist Sedmara Rutstein.

She completed her Master of Music and Doctor of Musical Arts at Stony Brook University in New York, where she studied with Gilbert Kalish, spending a year in Germany between the two degrees attending the Hannover Academy of Music, where she studied with internationally-renowned Israeli master teacher, Arie Vardi. Later, under a Fulbright Grant, Kate returned to Germany to work with Estonian pianist and pedagogue Arbo Valdma at the Cologne Academy of Music.

With violinist April Johnson and cellist Peter Seidenberg, Kate is a founding member of the New York-based Oracle Trio that has performed in concert series across the country (and at a special concert in honor of Kate’s parents’ 50th anniversary celebration at the UU Fellowship in 2011). Kate has issued two popular solo CDs and is active as a conference clinician, presenting lectures and workshops in the U.S. and internationally. She is also an adjudicator, including serving on the national Fulbright screening committee for piano applicants who wish to study abroad, as she did years ago.

“At one point in middle school, I decided I wanted to quit,” she said recently. “My mom said I could, but I had to wait for a year. By the time a year had passed, I had changed my mind.”

Kate’s performances and teaching have taken her around the globe.

“It’s a wonderful way to travel,” she said, “because I get to meet so many new people and, for a short time, become part of their community.” This summer she’ll be taking time off from Interlochen to teach and perform at festivals in Greece and Italy.

But before that, she’ll return to Door County. She is excited about appearing here, not only because she knows the area and many of the people, but also because of the piano she’ll be performing on at the UU Fellowship. It was chosen by the late John Browning, the internationally renowned pianist, who died at his home in Sister Bay in 2003, and donated to the UU Fellowship by Cynthia Stiehl.

She has performed in Door County a number of times before – besides previous solo recitals, she made a guest appearance in a musical evening at Björklunden arranged by the late Fred Alley and, again with Alley, in a rendition of Poulenc’s Babar the Elephant at the Sturgeon Bay Library.