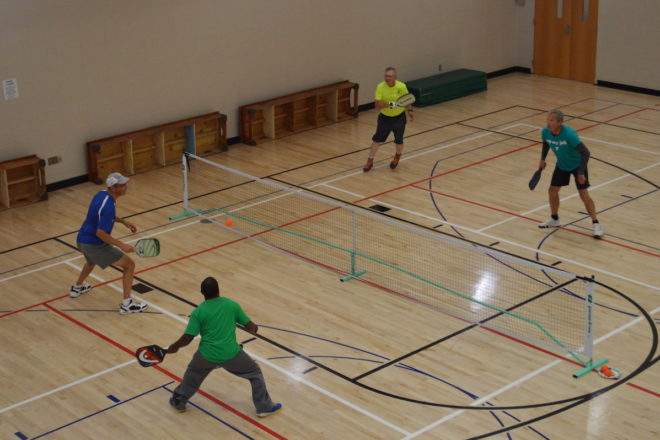 A heated pickleball match on a YMCA court. Photo courtesy of the Door County YMCA.

If you haven’t heard of pickleball yet, you’re bound to soon because the growing popularity of this competitive sport seems to show no signs of slowing down. At both Door County YMCA locations, the game draws daily participation to the dedicated pickleball courts. It’s been a main attraction for many YMCA members for years, and in 2012, the Northern Door location in Fish Creek added additional outdoor courts for more seasonal play.

“It’s huge,” said Megan Schneider, Northern Door YMCA’s program director. “When I started here three and a half years ago, it was slammin’ then and still is now. It’s a big movement within the active older crowd.”

This year marks the 54th anniversary of pickleball, which was invented in 1965 on Bainbridge Island, near Seattle. Three creative dads – Joel Pritchard, Bill Bell and Barney McCallum – were trying to find a new way to entertain their children, who were bored with their usual summertime activities. Using the equipment they had on hand – old ping-pong paddles and a perforated ball – the game was born. Since then, it has evolved from the original handmade equipment and simple rules into a popular sport that’s played throughout North America and is catching on globally.

The USA Pickleball Association formed in 2005, and in November, the annual Margaritaville USA Pickleball National Championships will be held at the world-renowned Indian Wells Tennis Garden near Palm Springs, California. The 2018 event was the largest pickleball tournament to date, with more than 2,200 registered players competing for $75,000 in prize money. It was also the first time that ESPN covered the sport, with 17 hours of live broadcasting on ESPN3 and a one-hour special presentation that aired on ESPNEWS.

Here in Door County, the opportunities to play pickleball are abundant and growing. At the Sturgeon Bay YMCA, the schedule has dedicated playing times each day of the week. At the Northern Door YMCA, open courts are available Monday, Wednesday and Friday, 12-2:30 pm; the Tuesday, 6-7:45 pm, window is for advanced players; and, starting Oct. 28, special beginner sessions for those wishing to learn the basics and get more involved will launch on Wednesday evenings.

“Pickleball has the most designated court time on the gym schedule, even during times with youth sports,” Schneider said.

The game is popular year-round, with many seasonal residents participating during the summer, and more of the business community and younger professional crowd playing during the winter.

“It picks up in different ways throughout the year,” Schneider said. “It’s an accessible sport, very doable at all ages, with lots of [former] tennis players. It’s similar to tennis but scored closer to how you score badminton.”

The main difference between tennis and pickleball is that the opportunity to score comes only after a serve, and the ball must bounce before each hit after crossing the net. Those factors, along with the slower-moving ball and smaller court size, mean that the sport has a much lower physical impact and demand on the body compared to tennis – a primary reason why it’s a favorite activity for those around retirement age or older.

According to the Sports and Fitness Industry Association’s 2017 Pickleball Participant Report, the game currently has 3.1 million players in the U.S., with 75 percent of the core players aged 55 and older.

Pickleball is commonly played as doubles to maximize play time during the busy sessions at the YMCA, but it can also be played one to one. During open play, players rotate in as each match ends, with winners staying to play again. Although it’s a relatively easy sport to pick up, experienced players find it’s possible to keep advancing and improving on their strategy, technique and stamina. Typically, courts are designated as beginner, intermediate and advanced, and an annual late-summer tournament at the Sturgeon Bay YMCA allows players to compete for a top title.

Ready to get in on the action? The YMCA makes it easy by providing all the necessary equipment. During the summer, the outdoor courts are free and open to the community, and during the indoor season, community members may join the pickleball play by purchasing a day pass or exploring the longer-term membership options.