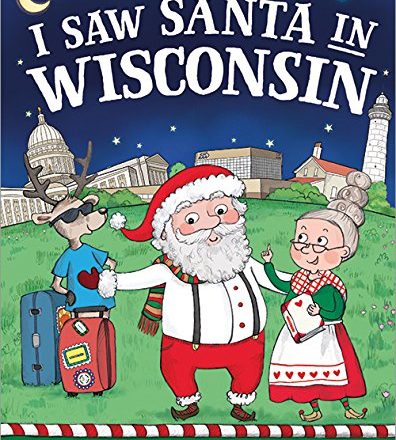 Where does Santa Claus go when he takes a summer vacation? How many snowflakes does it take to make a snowfall? How does a dinosaur celebrate Christmas? And why does Santa exclaim “Merry Christmas to all, and to all a good night” after making a delivery? A curious reader can find the answers to these and other perplexing questions in the children’s section of a good bookstore.

According to writer J.D. Green, the answer to the first question is obvious: Santa goes to Wisconsin! “Wisconsin has it all,” Santa says, “great sights, tasty bites, fun times great and small.” There’s only one problem: Santa must not be seen. But how is he supposed to hide himself at Mt. Olympus Water Park, the Discovery World Science and Technology Center, and the Wisconsin State Fair? He can’t, according to the title of Green’s book: I Saw Santa in Wisconsin. While Santa is having fun, the elves at the North Pole check the mail and find a pile of letters from children who think they have seen Santa.

Bella from Wausau writes to Santa, “Did I see you at Peninsula State Park, wearing green hiking boots and a red-and-white striped backpack?  It even sounded like you were whistling ‘On, Wisconsin!’”

I Saw Santa in Wisconsin is illustrated with zany pictures of streets, parks, and lakes. Both parents and children will enjoy trying to find Santa on these crowded pages. 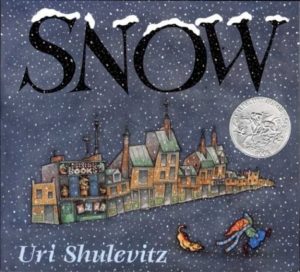 Snow, written and illustrated by Uri Shulevitz, received one of the highest honors available to a picture book:  a designation as the 1999 Caldecott Honor Book. Snow would be an excellent book for a child who is just beginning to read, because there are seldom more than six words to a page. On a dreary winter day, a little boy looks out upon a gray city street and sees a single snowflake, then another, then a third. The people around him are unimpressed. “It’ll melt,” says a woman with a hairdo as big as a poodle, complete with a tail. “It’s nothing,” says a man in an unnaturally sleek overcoat and a towering hat. Forecasters on radio and television predict “no snow,” but snowflakes pay no attention to radio or television. Snow piles up on rooftops, streets, and people’s shoulders. Characters painted on a storefront — a witch, a goose, and Humpty-Dumpty  — come to life and dance in the snow with the boy. The gray city turns white. 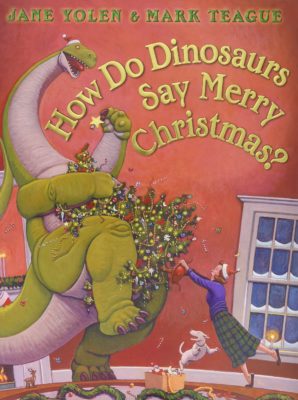 Does your pet dinosaur behave himself at Christmas? Does he rip open the packages, wreck the Christmas tree, gobble the cookies left for Santa, and slobber on the candy canes? No, of course he doesn’t. A dinosaur has more dignity and more sense, and you’ll see that in How Do Dinosaurs Say Merry Christmas? He helps trim the tree, clears the dinner dishes, and goes caroling with the children. By the time Santa arrives, the dinosaur is snoring in bed. Jane Yolen and Mark Teague have written a series of whimsical books about dinosaurs (How Do Dinosaurs Say I Love You? How Do Dinosaurs Get Well Soon?) They have also discovered entirely new dinosaur species, such as the Gigantoraptor and the Therazinosaurus.

For some readers, however, a beloved classic will always be the best choice. Today’s children have probably heard the song “Rudolph the Red-Nosed Reindeer” and watched the made-for-TV movie about Rudolph, but they may not have read the original version of the story, written in 1939 by Robert May and clearly intended as a sequel to ’Twas the Night Before Christmas. A new edition is now available, delightfully illustrated by Antonio Javier Caparo. Caparo was born in Cuba, but he settled in Quebec, and as an illustrator, he makes the most of his adopted northern home. His illustrations for Rudolph the Red-Nosed Reindeer include beautiful snowscapes, a shivery night, a proud dawning day, and such arctic creatures as ermines, polar bears, arctic foxes, snowshoe hares, snow owls, and even a narwhale — sometimes called a “unicorn whale” because of its long spiral horn. 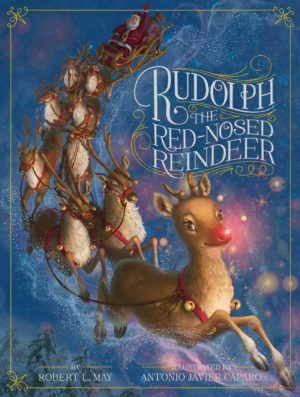 All of these creatures watch with interest as the tale of Rudolph and Santa unfolds. Caparo’s attention to detail is remarkable: Rudolph’s nose sparkles believably; the glow from his nose is reflected in strands of fog; the reindeer’s harness bells shine through the night. The editors have made an occasional change in the original text—for example, an obsolete “tri-motor plane” has become “a huge, speeding plane.” But the charm of the original version remains intact. Caparo’s illustrations clearly depict Santa’s affection for Rudolph, as well Rudolph’s sweetness and innocence. A child will treasure this book well into adulthood.