It’s July 6, and in the bright morning hours of a sun-baked Wednesday in Ellison Bay, boaters and workmen hustle out of the Pioneer Store with the day’s provisions.

Across the street there’s not a parking spot to be found at the Viking Grill, where owner Dan Peterson is taking a break from the kitchen at the breakfast counter.

Looking down the street one can’t help but see Ellison Bay as anything but a picture-perfect American small town. Yet Sunday will mark five years since the day when the picture of the village looked much different. 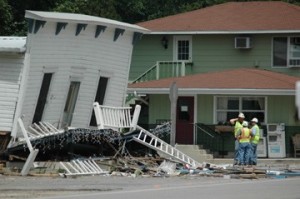 The Viking Grill was untouched in an explosion five years ago, but the Pioneer Store (foreground) was devestated.

On July 10, 2006, the Higdon family of Bloomfield Hills, Mich. was sound asleep in a condominium unit at the Cedar Grove resort, located just steps behind the Viking Grill. A little before 2:30 in the morning the family was ripped from their slumber when a blast rocked their unit, sending it up in flames. Another blast rocked another of the resort’s buildings, and a third destroyed the 106-year-old Pioneer Store, where owner Carol Newman was sleeping on the second floor.

Within moments Patrick and Margaret Higdon were dead, but their three children escaped, as did Margaret’s parents. Newman, miraculously, escaped serious injury when the second floor of her store suddenly became the first floor. Seven others were taken to the hospital.

Not much later Dan Peterson arrived to check on his business, only to find chaos.

“It was probably three in the morning, dark, and I just remember there was a lot of confusion,” Peterson recalled from the breakfast counter at the Viking. “The fire was still burning back by the condos. We didn’t know what had happened.”

Peterson’s restaurant stands directly across the street from the Pioneer Store (a young child could throw a stone from the Viking and hit the wall of the Pioneer Store rather easily) but remarkably, the building was left entirely unscathed that morning.

“All we found was a small mark on the window,” Peterson said, shaking his head in amazement.

The explosions were fueled by a propane leak that investigators determined to have begun three days earlier. That’s when Arby’s Construction, a subcontractor hired by Wisconsin Public Service, dug trenches to run electric to Cedar Grove’s dock. In the process they unknowingly damaged unidentified underground propane lines.

For three days propane leaked into the ground, weaving through the spaces in the Swiss cheese like rock of Door County. Door County Sheriff Terry Vogel said it was never determined what exactly sparked the gas.

“It could have been a refrigerator, a sub-pump turning on or an electrical unit,” he said. “We had ideas, but we’ll never know for certain.”

It was still dark when Vogel arrived on the scene and parked in front of what was now a single-story Pioneer Store.

“I remember getting out of the car and walking through the broken glass, hearing it crunch beneath my feet,” he said. “And I still think about the tragedy of the two adults who died, and how fortunate it was that others weren’t killed. What confusion there must have been for those people who were sleeping when it happened.”

By morning the community was shaken to its core, business came to a standstill, and an army of police, firefighters, Red Cross volunteers, federal and state officials and reporters descended on a village where people settle because even “the quiet side” of the peninsula isn’t quiet enough.

Police stayed on the scene for 10 days, but the tragedy wasn’t over. Three children were left without their parents. It would take a year for Carol Newman to rebuild her store. In May of 2008 the family of Patrick and Margaret Higdon reached a settlement worth $21 million after they filed a civil suit in U.S. District Court in Green Bay. Though no criminal charges were ever filed in the case, the lawsuit named five businesses and eight insurance companies, alleging that negligence in identifying the location of the propane lines caused the propane leak and the subsequent explosions.

In the years that followed the explosion its impact rippled beyond Ellison Bay and the courts.

In 2007 the Door County Board of Supervisors approved a voluntary propane system registry program that allowed people to submit the location of propane tanks and underground lines for mapping. That program received only seven participants, however.

In September of 2007 Rep. Garey Bies (R – Sister Bay) introduced the Propane Safety Act, which aimed to improve communication between propane suppliers and their customers about the importance of locating gas lines on their property. It also requires that propane suppliers be licensed by the Wisconsin Department of Commerce.

After the explosions the community rallied, and on July 1, 2007 the Pioneer Store re-opened, looking virtually unchanged from the outside. But the years since haven’t always been smooth for the community. The Viking escaped the blasts untouched, but was shut down by a fire over Labor Day weekend of 2010. In January of this year the home of Larry and Judy Thoreson, just a block down the street, was severely damaged by a fire as well.

But, after each setback, the owners built anew. The Thoreson’s home is close to complete. The Viking Grill’s breakfast counter is scattered with coffee and donuts and the Cedar Grove Resort still welcomes vacationers, albeit it under a new name, the Bayview Resort and Harbor.

Perhaps the best testament to the community’s resilience is seen on a stroll through town. One can stop and stand at the intersection of Highway 42 and Mink River Road, glance toward the Pioneer Store and beyond, and see nothing of the tragedy that shook this place five years ago.