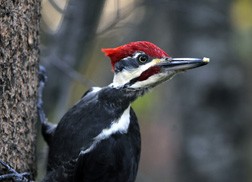 An adult male Pileated Woodpecker has some marvel meal at the tip of its beak. Photo by Roy Lukes.

I came out of the U.S. Army in 1955, began teaching in Madison, joined the Audubon Club there and, along with some expert birders, saw my very first crow-sized Pileated Woodpecker. Even the veteran birdwatchers appeared as excited as I was to witness this seldom observed and largest of all woodpeckers in the Midwest. There should be little wonder why the mountain people of the East have called this awesome creature the Good God Woodpecker for many years.

We’ve been fortunate to have Pileateds living and nesting in our woods and frequenting the feeders and water in our front yard on a daily basis, allowing us to observe and photograph them from close range. Two years ago what appeared to be a pair began to feed together in our front yard several times a day. The female’s irises were brown; the male’s bright yellow. We assumed that all females had dark irises even though the references didn’t mention it. No young were brought to the feeders that summer.

This year the female’s irises slowly turned to yellow like the male’s, and, much to our joy, the pair brought their young to the yard. Both the baby female and male have dark irises. What fun it is to be able to take one look at the Pileateds now and immediately recognize the immature male, female or mom or dad, simply by the amount of red on the crown and cheek, plus the color of the irises. The flaming red crest on the female comes to about the middle of the top of the head while that on the male extends all the way to the edge of the beak. Males’ cheek patches are mostly red. Those on the females are solid black.

What a perfect genus name the Pileated has, Dryocopus (dry-OCK-o-pus) – taken from the Greek meaning “tree cleaver.” Its species name is pileatus (pie-lee-AY-tus) based upon the Latin word “pileum” (PIE-lee-um) meaning a cap. We prefer to pronounce the bird’s name “PIE-lee-ay-ted” whereby others call it “PIL-lee-ay-ted.” Both are accepted.

The nesthole, formed mostly by the female, may take upwards of 30 days to complete. I observed the process being undertaken in a tall dead Balsam Poplar along the north side of Deerlick Trail at the Ridges Sanctuary in the spring of 1970. Examine the inside of one and you will agree that it is quite a work of art, not rough and slivery as one might expect but rather smooth to the touch. That tree with its Pileated nesting cavity was used by the pair for two consecutive summers and finally blew down in a storm in later years. I engineered an opening-and-closing exhibit of the nesting cavity, which is still displayed in the Ridges’ nature center. 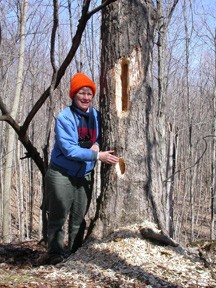 The Pileateds left their exclamation mark on this tree with their feeding holes. Photo by Roy Lukes.

Don’t confuse a feeding excavation with a nesthole entrance. I’ve seen trees where a Pileated Woodpecker, in its quest for Carpenter Ants or larvae of wood-boring beetles such as Horntails, made holes that were six inches wide, at least that deep and as much as three feet long. The nest’s entrance is usually rectangular in shape and approximately three by four inches in size. The inside cavity will average about 19 inches deep.

Many observations have confirmed the fact that older, unused Pileated nesting and roosting cavities are later taken over and used as nestholes by Wood Ducks, Common Goldeneye Ducks, Flickers, Screech Owls and Great-crested Flycatchers, as well as Flying Squirrels. Now you can realize the great importance of the Pileated’s “house building” for other wildlife. One could label Piley the master foreman of the “Woodland Habitat for Wildlife” crew.

Years ago Carl Scholz informed me of a Pileated Woodpecker excavating a nesting cavity in a tall, perfectly sound and healthy American Beech tree in the woods at The Farm. It was amazing watching that female working on her “nursery.” Every time she appeared at the entrance hole she would flip each fairly large wood chip away from the tree and in so doing, produced quite a halo of chips on the ground below scattered in roughly a 100-degree arc, rather than all of the chips simply falling onto the ground into a telltale pile.

We read a story about marvel meal written by John K. Terres, editor of the Audubon Magazine for a long time and author of The Audubon Society Encyclopedia of North American Birds, one of the outstanding ornithological publications of this or any other time, a large reference book I refer to often. We’ve used marvel meal daily for nearly 20 years to attract birds to our yard and to feed them this wholesome food. Woodpeckers, Chickadees, Nuthatches, along with an occasional Yellow-rumped Warbler, Baltimore Oriole, Catbird, and a few others are lured to this handout.

Google “marvel meal” on your computer and you’ll find a number of different recipes including ours. We prefer the no-melt recipe, which in summer does not get weepy and soft, attract a lot of flies, nor adversely affect the facial feathers of the birds. 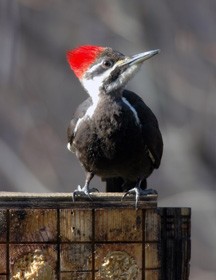 It was during this past mid-October, while I was in my portable blind photographing birds in the front yard, that the adult male Pileated Woodpecker swooshed onto the marvel meal feeder several feet to the right of where I hid. Unfortunately, because of how the blind was arranged, I couldn’t quite see (through my camera) Piley feeding. However, within a minute or so he flew over to the small White Ash tree around eight feet to the left of my hiding place. He was inching his way down to the pedestal birdbath situated less than a foot from the tree where the Pileateds like to drink.

Fortunately I was able to very slowly swing my camera, mounted on a tripod, to where I could see the woodpecker, but talk about a highly wary and suspicious creature. Even though he refused to have a drink of water, I was able to get a half dozen pictures of the gorgeous bird, especially breathtaking at such close range, before he flew off into the woods.

Here’s to the master carpenter of all birds, the gold medal winner, the Pileated Woodpecker!