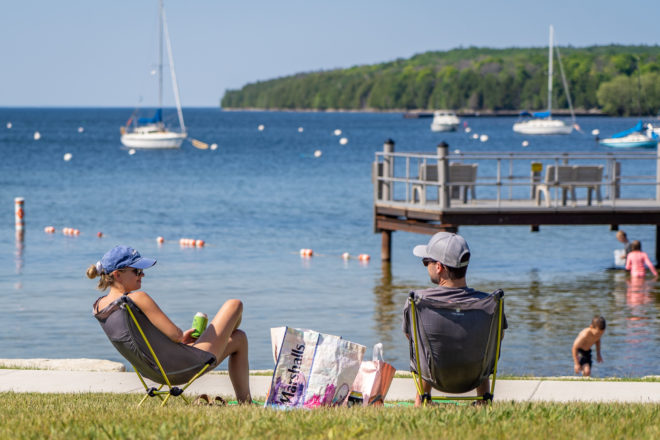 Beach water monitoring takes place at 32 of Door County’s 54 coastal beaches to ensure that the water is safe for swimmers. Photo by Rachel Lukas.

The widely reported outbreak of gastrointestinal illness in 2002 that afflicted 68 Peninsula State Park campers who swam at the park’s Nicolet Bay Beach created confusion and fear. No one knew why, how or what had caused the illnesses.

Door County Public Health investigated the outbreak as it was occurring and determined bacterial contamination of the beach water was related to the illnesses.

“We closed the beach which, at the time, was a radical and controversial intervention,” said Sue Powers, Door County Public Health officer/manager.

Not any more. Wisconsin’s Beach Monitoring Program began a year later, lifting the shroud of mystery and confusion surrounding that 2002 incident. Today, beach closures and advisories due to elevated levels of E. coli happen seasonally at various beaches across the state, including Door County. The primary sources of the E. coli contamination have also been identified and in many cases, mitigated.

“The county went on a long and detailed effort to identify the E. coli, so a number of beaches had themselves reengineered in a variety of ways,” said Greg Kleinheinz, who chairs UW-Oshkosh’s Department of Engineering and Engineering Technology.

The Door County Public Health Department, which receives money from the Wisconsin Department of Natural Resources for the beach monitoring program, has contracted with Kleinheinz to perform the monitoring since the inception of Wisconsin’s Beach Monitoring Program, which is part of the federal BEACH (Beaches Environmental Assessment and Coastal Health) Act of 2000, and an amendment to the Clean Water Act.

The program monitors E. coli in the water – which indicates the water is likely to be contaminated by feces, increasing the risk of exposure to pathogens that can cause illness – and requires beach-water advisories or closures to be posted when levels are elevated.

Some Door County communities have used the source-identification data collected by the program to mitigate the two main culprits – stormwater outlets and waterfowl feces – that cause E. coli to wash into beach water. Baileys Harbor moved its stormwater pipe away from Anclam Beach, for example, and Egg Harbor installed an engineered bio-filter with shore grasses and other plants to prevent the beach water from being contaminated from the hills above.

“It improved markedly a few years back when the remediation efforts were done,” said Sue Powers, Door County Public Health officer/manager. “The SWCD planted grass strategically to defer waterfowl and prevent goose droppings from getting into the water.”

The result was a significant decrease in “beach action days” in Door County, or days when E. coli levels are elevated and warrant an advisory (swim at your own risk) or closure (no swimming allowed).

“Most of the beaches, with the exception of one or two, are remarkably good in terms of their water quality,” Kleinheinz said.

Yet huge rain events still stir things up. Neither have all local communities opted to divert their storm-drain outlets away from their swimming beaches. There’s also the stray occurrence, such as a leaking septic line flowing down the bluff and into the beach water, as happened last August when the Ephraim beach was closed for a couple of days, Powers said.

There were 36 total beach action days in 2019 and 41 last year, according to the data the Wisconsin Department of Natural Resources publishes online.

The monitoring, then, continues. Seven of Kleinheinz’s UW-Oshkosh students are here this season, living in a Baileys Harbor rental home. Through Labor Day, they’ll monitor 32 of Door County’s 54 coastal beaches and process the water samples they take at a Sturgeon Bay lab.

But the lab results aren’t available until the following day. The student then needs to head to the beach to post the advisory or closure sign.

“If people are astute, they check the website” before heading to a beach, Powers said. “But if they go to the beach, there may not be [an advisory/closure] sign. Sometimes the reverse happens – the beach is open, but the sign is still there.”

To close the travel-time gap between known test results and posted signs, Door County Public Health and the SWCD are asking the Door County Board of Supervisors for funding for electronic beach warning signs that would be operated remotely.

“The electronic notification allows us to change the status of the beach instantaneously when the lab gets the result,” Kleinheinz said.

The rapid-notification system can also be used to warn of physical conditions that are not currently conveyed by any kind of signage, yet make for unsafe swimming conditions, such as rip currents and offshore weather. This can be done through a livestream camera that allows people to see beach conditions. The monitor can also be linked to data coming from National Oceanic and Atmospheric Administration weather buoys that observe maritime conditions.

“What they’re doing in Michigan [with the beach warning systems] is monitoring that buoy data for nearshore hazardous conditions,” Kleinheinz said.

The specific request from Door County Public Health and the SWCD is for $40,680 in American Rescue Plan Act (ARPA) dollars to install trial beach-warning systems at three popular beaches that have yet to be determined. The request will go before the Door County Board of Supervisors on June 28.

Projected installation costs per unit are $12,480, with annual service plans running at $360 per device. The ARPA funding request would pay for the service plans for three years. After that, the county would need to find alternative funds for ongoing service, and if the trials are successful, purchase installations for the other beaches.

Though the SWCD doesn’t have any role in the beach-monitoring program, SWCD conservationist Erin Hanson said the department supports the project “because it’s important to be able to communicate with the public, from a water-quality perspective, when unsafe conditions exist.”

The environment rose to the top of a priority list of topical areas that the Door County Board of Supervisors would consider supporting with its $5.37 million in ARPA funding. Two other environmental projects that it has already approved are a native phragmites control project and expanding the private-well testing program.