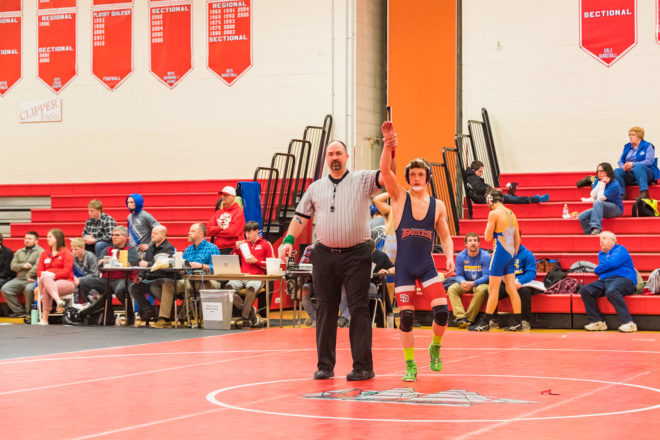 Griffin Slezewski returned to the wrestling mat this winter. He won this match by forfeit against Oconto at a wrestling dual meet at Southern Door High School on Jan. 23. Photo by Len Villano.

Kevin and Tracy Slezewski had one simple request when contacted to discuss writing a story about their son Griffin’s battle with acute myeloid leukemia (AML).

“One general comment we’d like to add is that we as a family, and Griffin especially, don’t really care to draw attention to all of this,” Kevin and Tracy wrote in an email. “But we feel that if even one person draws some inspiration from his story to make their life better or overcome a challenge, it’s worth sharing.”

Judging by the battle Griffin has waged against AML during the last 376 days, it’s clear his inspirational story is worth sharing. Treatment of AML is a lot like chapters in a well-written novel: Each one gets better until the satisfying ending. Or in the case of Griffin Slezewski, another beginning.

Although Griffin shocked doctors by going into remission one month into his arduous treatment, he ultimately underwent five rounds of chemotherapy, experienced 214 total days of treatment and spent 138 days in HSHS St. Vincent Children’s Hospital (St. Vincent) in Green Bay before earning his discharge Aug. 1, 2019.

“Overall, I believe this has been a positive experience,” Griffin said. “I learned more about my body’s limits than most people will learn in a lifetime. The overwhelming support I received from my family and my community, as well as my determination, is what got me through it.”

Griffin had myriad reasons to believe his 2018-19 wrestling season at Southern Door would be successful. As a freshman, he finished sixth at 113 pounds at the Division 3 state meet and compiled a 34-14 record. A return trip to the state meet didn’t seem unreasonable.

That’s when Griffin began experiencing the aches and pains most wrestlers have throughout the course of season. When they were accompanied by a headache and fever, his parents took him to a local urgent-care center three times. It wasn’t until a trip to the emergency room in Green Bay that Griffin received his diagnosis.

“A lot of the symptoms that could indicate leukemia also indicate something else, so they are vague, generalized symptoms,” said Dr. Catherine Long, a Previa Health hematologist-oncologist at St. Vincent. “If you have a kid or a teenager that presents with some of those symptoms like a fever, fatigue, easy bruising and generalized pain, it’s likely that it’s going to be something else like a viral infection. It’s when those symptoms persist and don’t go away – that’s usually when it’s something else.”

Kevin says he and Tracy switched to survival mode at that point. Not only were they dealing with a serious diagnosis for Griffin, but they also had sons Ben and Spencer at home, who were processing their brother’s plight.

“At first, you almost can’t believe it’s happening,” Kevin said. “There’s an initial wave of grieving, but that goes away quickly. In the early days after the news, the amount of information being thrown at you is overwhelming, and you can’t really digest or retain everything.”

Griffin was officially diagnosed on Jan. 27, 2019, and he immediately began a 31-day course of chemotherapy at St. Vincent. The goal of chemotherapy is to bring the patient into remission as quickly as possible. Although the treatment is effective, patients experience adverse side effects such as hair loss, fatigue, nausea and loss of appetite.

“I only remember bits and pieces from the first month,” Griffin said. “I remember thinking I was going to do whatever I had to do to get better. Losing wasn’t an option.”

Griffin’s first victory came Feb. 27, when doctors confirmed he was cancer free after his first round of chemotherapy. According to the standard of care, he would be given four more rounds of chemotherapy in order to kill a small number of cancer cells that might be lingering undetected in his body.

“I felt happy and relieved,” Griffin said. “After hearing the news, I had everything packed up in 15 minutes. Nearly everyone on the floor came to say goodbye.”

For Kevin and Tracy, it was an opportunity for their family to return to the relative normalcy of their family life prior to Griffin’s diagnosis. Kevin said that either he or Tracy was always at the hospital while the other managed the household. Kevin would work and be at home Monday through Thursday, and Tracy would come home Thursday night through Sunday afternoon.

This setup required each of them to function more like a single parent to Ben and Spencer. The pair would see each other for a few minutes twice a week when they switched roles at the hospital.

Walking For Health is a St. Vincent program created for patients who are required to stay for long stretches. Although chemotherapy is effective in treating AML, it doesn’t distinguish between healthy blood cells and cancer cells, so Griffin was susceptible to infections and needed to be hospitalized during his treatment.

He enrolled in the walking program, and although he struggled to walk a considerable distance at first, he said he eventually improved his conditioning and gained motivation by walking the halls of the hospital. When he left St. Vincent after his last chemotherapy session, he had walked 254 miles.

“My [initial] goal was to simply walk to the door [of my room] and back,” Griffin said. “Once I started to regain strength, I could start to see my physical progress. We made a plan to walk greater distances more frequently. Though I might not have realized it at the time, simply getting out of the room every day also helped me mentally.”

Griffin returned home and slowly got himself back into shape for the upcoming cross-country season. After finishing physical therapy, he competed in his first race in Chilton on Sept. 13.

“The accomplishment of walking 254 miles in the hospital during his treatment isn’t something that they’ve ever seen, and it is one of the reasons his doctors have cited for his remarkable recovery,” Kevin said. “Most patients choose to stay in their bed and rest when they don’t feel well, but early on, Griffin made the choice to get up and get moving.”

Back on the Mat

Griffin returned to the wrestling mat in November, and according to Coach Jerry Englebert, he has steadily improved all season. Griffin has a 28-12 record and will be awaiting his seed for the upcoming regional meet at Brillion on Feb. 15.

“To have the record he does and to be where he’s at is incredible,” Englebert said. “He doesn’t set goals lightly, and he’ll be ready for the postseason. He is an inspiration to everyone he knows and many who just know his story.”

Grant Englebert, Griffin’s buddy since kindergarten, has taken inspiration from his battle. Englebert placed fifth at 152 pounds at the Division 3 state meet last year with the burden of knowing his friend and teammate was in a battle much tougher than six minutes on a mat. A text message from Griffin prior to the state meet served as motivation for Grant.

“Shortly after Griff was diagnosed is when I started turning a corner and really making strides toward the end of the season,” Grant Englebert said. “I attribute that mental wake-up to him. It really got me going to know that he couldn’t be doing what he loved, and it fueled me to do well for him. Before every single match, I would think to myself, don’t just wrestle for yourself, wrestle for him, too. And that helped me tremendously.”

The highest risk of AML relapse is within six months. Griffin just finished that phase. Beyond the initial six months, the rate of relapse goes down until a person is considered cured after five years of being cancer free.

“We remain reserved to get excited about the results because it can change at a moment’s notice,” Kevin said. “We are thankful, but still very guarded with our emotions.”

They aren’t guarded, however, about the pride they have in the courage Griffin showed during his intense treatment.

“It is indescribable to watch your child go from being a strong, independent, determined teenager one day to beaten down, so weak he cannot walk, not knowing what tomorrow will bring next,” Tracy said. “But then to watch that same determination, strength and independence bring him right back up is something that makes you so proud as a parent.”