The 2013/2014 season was exceptional for Southern Door wrestling. For the first time Southern Door’s varsity wrestling team won the Packerland Conference championship, they had three wrestlers qualify for the state tournament, and senior Jacob Englebert earned the state title in the 145-weight class.

The momentum of the program has been building in recent years with state appearances by Tyler Wagner, Nolan Wagner, Hunter Schubert and Colin Schubert, who earned the state title in the 145-weight class in 2013. The success of the program is a credit to the coaching staff, the athletes’ work ethic and an impressive organization for youth wrestlers. 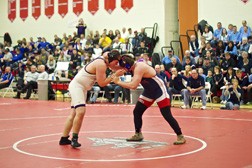 Head coach Jerry Englebert said, “This year has been so successful because the wrestlers and families have all bought into the team philosophy and have worked hard together. From the first-year wrestlers to the most experienced they are hard working and committed to one another.”

Part of the success is the dedication of the athletes – for them it’s not just a one-season sport. “The guys lift weights on their own all year round. As a team we start lifting the second week of school three days a week in the mornings before school. I also hold open mat on Sunday nights during the summer for the guys that want to work on skills and stay sharp,” said Englebert, who has headed the program for three years.

Some of the wrestlers also compete in local and national tournaments in the “off season,” and Englebert encourages his wrestlers to attend camps, including one at Southern Door with former Olympian Dennis Hall.

Along with Englebert, Steve Neville and Wendell Wagner coach the varsity squad. They are all Southern Door alumni; Englebert and Neville even wrestled in high school together and both went on to compete in college. Their coaching experience in one school district is impressive: Englebert was also the youth coach the past 10 years, Neville has coached at Southern Door for the past 19 years, and Wagner has been a volunteer coach at the youth, middle school and high school levels for about 15 years.

The commitment and knowledge from the coaching staff and the dedication of the athletes have propelled the program, and their success is drawing attention.

“As a team we are starting to get noticed both in school and in the wrestling community as our wrestlers improve,” said Englebert.

The team makeup is varied, but most of the wrestlers have prior experience in the sport. “We have wide range of experience on the team. About half started in the youth program in grades K-3, a couple started in middle school, a couple have two years and one started this year.”

According to Kevin Slezewski, “The Southern Door Wrestling Club was formed in 1984 when Jim DuBois, Gerald Englebert and Dick Johnson wanted to improve the wrestling program at Southern Door.”

They started with approximately 100 youth wrestlers, but numbers dipped after 1984. Currently, numbers are holding steady with 47 in the youth program and five in middle school.

Slezewski, club president and parent of two club wrestlers, continues, “Anyone can participate, boys or girls, any size, any stature, any age, any ability.” 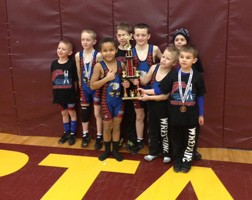 The club season goes from December through March, with camps held throughout the year. Tournaments have a looser structure than many other team sport tournaments, with the child/family able to participate and travel to tournaments in any frequency they’d like. The tournaments are organized so similar ages, sizes and ability levels are paired for matches.

“This year’s results are a series of highs and lows, with some great wins/performances, and some tough losses,” said Slezewski. “That is true of every season. They’ve notched many first place finishes and even took third place as a team at the Luxemburg-Casco Youth tournament.”

Englebert said the club is “…very strong, with parents of athletes from all age levels, which should keep it strong for many years to come.”

A benefit of a strong youth club for Englebert is many of the youth wrestlers have varsity competition set in their sights. There are mutual benefits between the club and the varsity program: the club cultivates talent and good athletes, and the varsity athletes inspire the younger wrestlers to work hard. 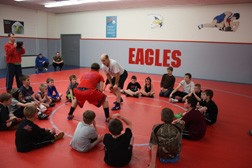 Varsity wrestler Micah King (in red) and Coach Jerry Englebert demonstrate a maneuver for the youth wrestlers.
Club President Kevin Slezewski said, “At a few practices this year, some of our varsity wrestlers came in to coach our youth. It was fantastic and the kids practiced harder than they have all year! The youth wrestlers have a different look in their eye when the varsity is around. The interaction between them is just plain impressive and I have the utmost respect for our varsity wrestlers.” Submitted photo

“There is a great deal of communication between Jerry and I,” said Slezewski of their shared goals. “He is one of the driving forces of Southern Door wrestling. One of the things I respect most about Jerry is that he’s wholeheartedly in it for the kids. It’s their success and development that drives him. He never looks for the credit, but just keeps giving of himself to help the kids improve as wrestlers and people.

He definitely always has his eyes on the future and how the kids are being coached. The club focuses on getting the fundamentals right which will help them as they get into the high school ranks.”

The varsity program builds upon the structure and the training the wrestling club puts in place. As Slezewski says, “Kids that wrestle for Southern Door have a great opportunity for success with our current coaching structure.”

This coaching structure is tight and communicative…giving the best chances of success to Southern Door wrestlers and their program.

The Southern Door Wrestling Club holds youth (4K through fifth grade) practices every Tuesday and Thursday from 6 to 7:30 pm. Even if kids aren’t signed up with the club, they can show up to experience wrestling. For more information visit southerndoorwrestling.com or find them on Facebook.