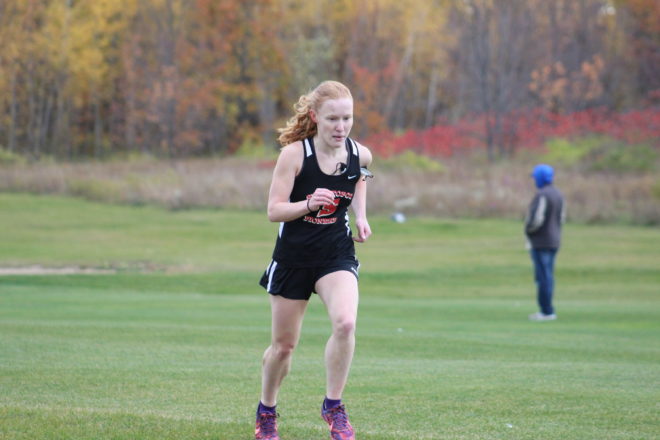 Heading into the WIAA Sectional meet last Saturday, Sevastopol cross-country coach Annie Kopelnek was confident that star senior Olivia Stenzel was going to earn her fourth straight trip to the state meet. What she wasn’t ready for was that the rest of Stenzel’s teammates would join her.

“We didn’t expect this to happen,” Kapolnek said Tuesday. “But we had three freshmen who really stepped up and ran the best races of the season.”

That powered the Sevastopol girls to a second-place finish and a trip to West Salem for an unconventional state meet. Stenzel performed as expected, finishing second overall in 19:51, and fellow senior Kylie Newton excelled, finishing ninth in 21:42. But the freshman trio of Jolene Luedtke (sixth, 21:24); Bea Dramm (12th, 22:21); and Libby Ash (18th, 23:28) helped edge out Lourdes Academy.

“Bea took 45 seconds off her personal best, and Libby ran a minute and a half faster than she ever has,” Kapolnek said. “It was just unbelievable.”

Kapolnek, in her first year as head coach, said the shortened season may have played a role in the surprise finishes. Normally runners would be competing in their ninth or 10th race of the season, but for these freshmen, it was only their sixth.

“They’re just figuring out how to race,” Kapolnek said.

McKenzie Wiesner ran 24:49 and Rachel Wilke 24:57 to round out the Pioneer finishers. Now they’ll prepare to run a course that’s entirely unfamiliar to them – in a configuration that’s been adjusted to keep competitors safe – to finish a COVID-tinged season. The championship meet will be run in three waves to keep the runners in groups of no more than 40.

Sevastopol will run in the final wave at 3:30 pm, meaning they’ll be running against the clock, rather than the pack, Kapolnek said.

A long bus ride awaits. At the other end, they’ll stay in a hotel and order takeout, rather than enjoying a team dinner out. But the Pioneers aren’t complaining about a thing. When they found out they were state-bound, they cried in disbelief. Near the end of a season when no day was taken for granted – when there was never certainty that the season would be completed – they’re simply happy to run.

“We just want to compete, and we’ll do whatever we have to to make that happen and keep everyone safe,” Kapolnek said.