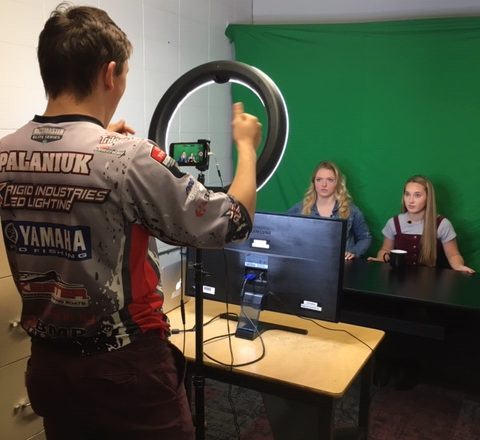 (From left) Anchors Lauren Junion and Ellie Krohn prepare to film while Triston Beauchamp gets the camera ready.

My visit to Sevastopol School began by walking into a small room stuffed with cabinets, a table and chairs, a green screen taking up an entire wall and a camera tripod with an attached ring light.

I was there to meet the students behind Pioneer News, the Sevastopol School news broadcast that comes out every Friday. It was a Wednesday, and the students were filming their ninth episode of the year. Episodes include the Pledge of Allegiance, sports recaps, jokes of the day, general announcements, birthdays, fun facts and weekend updates, all provided by the news team and its guests. Teachers show the episodes to students on YouTube every Friday morning, and they remain available for viewing there or on the school district’s website.

In the episode that was in production, fourth-grade students recited the Pledge of Allegiance, and several students were interviewed, including one who had auditioned to participate in the Wisconsin School Music Association honors choir and a running back who had rushed more than 1,000 yards in football. The members of the multicultural club also added a feature about what they do and why they like being involved.

Editor Lauren Junion and fellow anchor Ellie Krohn donned lapel mics and ran through takes of the episode, reading from a script they’d written that was displayed on a computer screen. They were always smiling.

Maggie Hartman, now a freshman at Marquette University, founded Pioneer News after hearing a group of seniors talk about how they wished a broadcasting program existed at their high school. What started as a fun project that she filmed during lunch breaks, homerooms and time outside of school soon grew into a regularly scheduled class with grades and deadlines.

Hartman, then a junior, turned to Mindi Vanderhoof, high school English teacher and journalism adviser, to get the project off the ground. By the end of the year, she’d completed a trial video to present to Vanderhoof, Principal Adam Baier and the school board. They gave her the thumbs up to launch it during her senior year in 2018.

“I remember the first episode came out the first week of school, and I had bitten off all my nails before it had even [been broadcast],” Hartman said.

The project didn’t have a budget, so she filmed it using her own camera gear and knowledge. Even now, the students pay for updated equipment with their own money and film the episodes on an iPhone.

“It was a lot of work, but it taught me how to be independent,” Hartman said.

The broadcast didn’t immediately win over classmates, but after her anchors learned how to look at the camera, scripts improved and the crew size grew, students started begging Hartman to be in the next episode of Pioneer News.

Her goal was simple: “I wanted to make my senior year something that not only me and my class would remember, but also the community,” Hartman said. “I believe Pioneer News did that. The broadcast was a way students could laugh, become informed and relax just for 10 minutes weekly.”

She’s now pursuing a double major in advertising and digital media, hoping to enter a career related to film and marketing.

The editing torch passed to Junion, who spends up to six hours a week outside of class working as the editor, producer and co-anchor on top of being a three-sport athlete.

“It gets pretty late some nights,” she said.

There are only nine students on the crew, all of whom are busy with sports or have work-leave during the school day, so the crew has had a few close calls meeting its deadlines.

“There have been times that I’ve either been editing until two in the morning, or I’ve been getting up on Friday mornings to finish,” Junion said.

She was able to keep Pioneer News going by carrying over what she learned through observation and experience as a crew member the previous year. She was also the only underclassman who learned the editing program.

“I knew a lot of people really liked watching the news every week and that it meant a lot to a lot of people, so I made sure to take the class so we could keep Pioneer News going,” Junion said.

It was her job to teach her classmates what she knew, but sometimes that was hard to translate into words, she said.

Rather than reporting on hard news, the broadcasts showcase student life in and out of school and make people feel happy, Junion said. The crew leaves the hard news to the staff of the school newspaper, the Pioneer Chips.

Vanderhoof, who still advises the journalism classes while on maternity leave, enjoys seeing the students take the reins and put in the work. It’s very hands-on, project-based learning and entirely student led.

“They take ownership and pride in something and put in a lot of work,” Vanderhoof said. “It’s a labor of love.”

The students plan their own agenda each day, assign tasks to crew members and brainstorm segments. There’s more pressure now that grades are associated with the program, Junion said.

Carrie Mulrain, who is overseeing the class in Vanderhoof’s absence, said she steps in only to ensure that the students remain efficient, are managing their time properly and are meeting deadlines.

Most of the students in the class aren’t interested in journalism careers past high school, but the skills they learn in the class – meeting deadlines, delegating assignments, conducting interviews and dedicating time – are invaluable in any job, Vanderhoof said. It’s a fun hobby for Junion, but it’s not a career interest for her either. Instead, she does it because people like it.

“I like hearing the community feedback,” Junion said, “like parents or grandparents come up to me and say, ‘I watch you on Pioneer News every week, I love it.’”