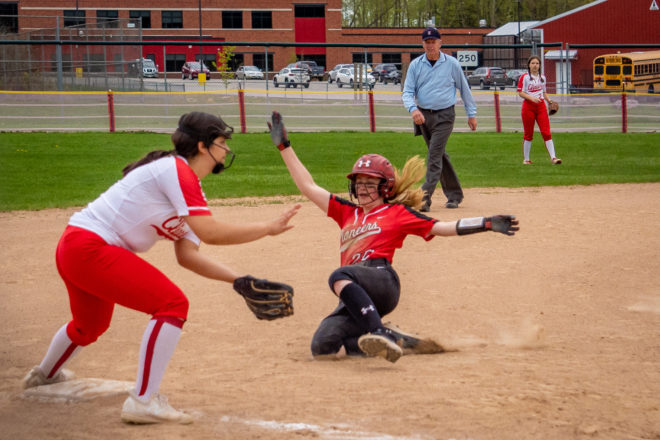 Sevastopol’s Naomi Rikkola (20) slides into third base Monday to get under the tag of Sturgeon Bay’s Caprice Carbajal. Photo by Rachel Lukas.

Sevastopol’s softball team kept its winning ways going into the postseason by wrapping up the regular season and Packerland Conference schedule with two victories in three days.

The Pioneers hosted their final conference game of the season Monday when they shut out Sturgeon Bay in five innings, 13-0.

Four Sevastopol players accounted for nine of the team’s 11 hits. Freshman Kayla Ranly batted 2-2 with 2 RBI, senior Sam Differt went 3-3 with 2 RBI and a double, Kristen Daubner was 2-3 with a triple and Jolen Luetke went 2-3 with 2 RBI.

Sevastopol, which also picked up a 7-3 conference win Saturday at Algoma, closed out the regular season 6-2 in the Packerland, two games behind conference champion Oconto, and 13-5 overall.

The Pioneers enter the postseason seeded No. 1in their WIAA Division 5 Regional and open the tournament at home May 24 at 5 p.m. against No. 8-seeded Pembine/Goodman.

Southern Door got to play two additional innings to close out its conference schedule when the Eagles won 7-6 at home against Algoma in nine innings.

The Wolves led 4-0 in the fifth inning when Southern Door rallied for five runs to take the lead.

Algoma tied the game at 5-5 in the sixth inning.

After the Wolves pulled in front 6-5 in the top of the ninth, the Eagles recorded back-to-back-doubles in the bottom of the inning from Sophia Counard and Colbi Jacquet and then scored the winning run when courtesy runner Erin Griep reached home on an Algoma error on a ball hit by Greta Gutschow.

The Eagles, who finished 5-3 in conference play, received a No. 6 seed and an opening-round bye in their WIAA Division 3 Regional, where they will play a semifinal game May 24 at 5 p.m. at No. 3-seeded Wrightstown.