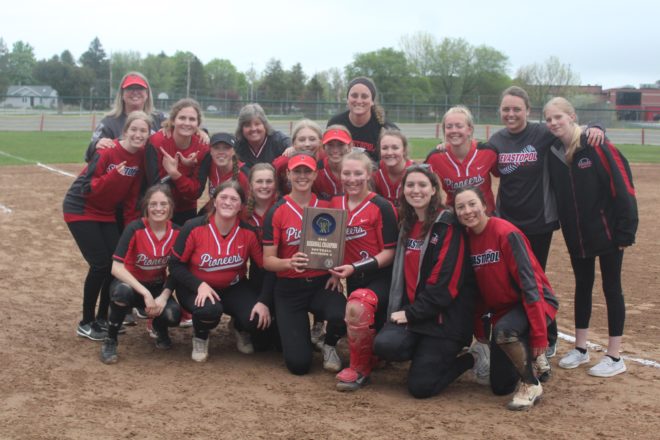 Sevastopol’s softball team did most of its scoring early Thursday on the way to winning the WIAA Division 5 regional championship.

The top-seeded Pioneers jumped out to a five-run lead after two innings and held on to defeat No. 4-seeded Niagara, 6-1.

After Sevastopol sent all nine batters to the plate and scored three runs the first inning, a two-out double in the bottom of the second by Kristen Daubner drove in two more to extend the Pioneers’ lead to 5-0.

The Badgers’ only run came in the top of the third, when pitcher Abby Wells walked and eventually scored on a wild pitch.

Sevastopol added an insurance run in the bottom of the sixth.

Libby Ash pitched the first six innings for the Pioneers to record the win. Addison Schauske closed out the game in the top of the seventh by striking out the side to seal the victory.

With the win, the Pioneers advance to Tuesday’s sectional semifinal they will host against the winner of Friday’s regional championship between No. 2-seeded Laona/Wabeno and No. 6-seeded Florence.

Regional softball wasn’t the game going on Thursday at the Sevastopol Town Park in Institute.

The Pioneers’ baseball team, seeded No. 4 in the WIAA Division 4 Regional, defeated No. 5-seeded NEW Lutheran, 7-2.