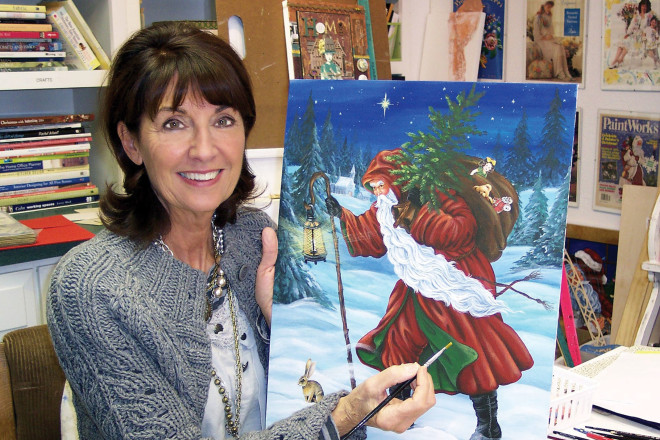 For those who celebrate it, Christmas conjures a warm, fuzzy feeling inside, and it makes sense to appreciate a woman who’s known as “The Santa Lady,” someone who takes those traditions and turns them into art.

Even if she didn’t have her roots deep in the Christmas spirit, the warmth Pipka Ulvilden radiates is undeniable. It’s in everything from her nickname – christened Evelyn, her family began calling her Pipka, “little bird” in Slovakian – to her physical presence. Dressed in beautifully colored and textured clothes, she’s always excited to see the friends and longtime customers that walk through her door.

Her energy translates to her tiny storefront on Sister Bay’s Mill Road. In what she calls “an enchanted cottage,” all of Pipka’s passions – her art as well as her love of travel, flea markets, and decorating – can be found. 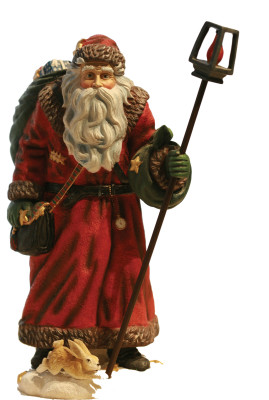 “My goal with the shop has always been to make people feel as if they’re being invited into my home,” she says. The smell of fresh-brewed coffee is in the air and, chances are, at least three loaves of her Scandinavian Almond Cake have been baked (by Pipka, from scratch) for customers to enjoy. In the midst of all of the gift items, jewelry, and Santas, there is a mood – a mixture of childhood, nostalgia, and unbridled creativity.

Pipka was born in Slovakia and raised in Germany. After World War II, five-year-old Pipka and her family immigrated to America in 1949 and ended up in the tiny town of Michigan, North Dakota. Life in small town America was very different than that of war-torn Europe.

“It was the kind of place where the sky was blue and children could play outside until the moon came out,” Pipka says.

Pipka’s father was a physician, but he studied at the prestigious Vienna School of Art. He brought his love for drawing and painting to North Dakota.

“He didn’t spend as much time on his art as he could, but he loved to draw for me,” says Pipka. “I remember being so transfixed that one could use something as simple as a piece of paper and pencil and have something come alive on a page.”

Annual trips home to Germany kept Old World traditions alive and inspired Pipka’s artistic journey. She explored a number of artistic endeavors throughout her childhood and early adulthood, including the Bavarian painting style known as Bauernmalerei or “peasant painting” (pronounced bow-urn-mall-er-eye, bow rhymes with cow). It wasn’t until the early 1970s, however, that she saw her art as something that might be able to make her a living.

“They say necessity is the mother of invention,” Pipka says as she laughs. “I was a newly-single mom, and I needed to provide for my family, and I knew that I could do something with art.”

She was living in Minneapolis then, so she took a few adult classes at the Minneapolis School of Art and found that she kept returning to the “peasant painting” of her heritage.

“The style of painting is the simplest form of art,” Pipka says. “It’s so primitive, and yet it really represents the culture. Different families have different styles of Bauernmalerei painting – it’s like having your own artistic handwriting. Families will paint scenes on walls or furniture like they’re recording a history.”

She soon opened up her first workshop in the city, teaching Bauernmalerei classes and painting furniture for clients.

In 1981, Pipka married and moved to the sleepy village of Sister Bay, and her art flourished in her new environment. In fact, it was on a day when all of Sister Bay was snowed in that she painted her very first Old World Santa as a gift for her mother.

“It was on an 18-inch wood cut-out,” Pipka says, “and it really got me thinking about the role of Father Christmas in other cultures – the costumes, the traditions. I wanted to present something other than the ‘Coca-Cola’ Santa we always see in America, so I started creating more of them.”

By 1995 she had teamed up with Michele Johnson and Gary Meidinger to form Prizm, Inc., a gift company, through which she introduced her designs as limited-edition collectible figurines. Sixteen years later her Santa, Madonna, and Angel figurines are featured in over 900 stores around the country.

The creative process for just one Santa can take anywhere from 12 to 15 months to complete, and since Pipka debuts a number of new pieces each year, it adds up to a lot of time in her Sister Bay studio. Once Pipka gets an idea for a Santa design, she’ll spend hours researching that particular Santa’s heritage. After that, she’ll paint the main design. This includes painting separate views of each Santa, with major attention to detail.

“This way, Gaylord can see exactly what I’m envisioning,” Pipka says. That’s Gaylord Ho, who makes his home in Taiwan and has been the sculptor of Pipka’s creations since her first collection.

When Ho receives Pipka’s original art, he sculpts a clay model in the exact size of the figurine. He sends images from every possible angle to Pipka so she can make corrections as necessary. Once the sculpture is approved, Ho makes a cast from the clay sculpture, paints it, and ships it back to Pipka for her to inspect. If all looks good, the process of producing the figurines begins, with a marble resin poured into the molds. Each figurine is then hand painted and hand numbered. Once the run has been produced for a figurine, the mold is broken and the piece is retired, making the pieces valuable as soon as they’re sold.

Pipka’s Santas represent the majority of her artistic career, but she continues to evolve as an artist. She recently began experimenting with collage work and something clicked.

Pipka’s collage work consists of shadow boxes, canvases, and even jewelry – an art form that piqued her interest when her friend Angie Dowland owned The Perfect Beads in Ephraim. “I walked in there and fell in love with all of the components,” she says. “I found that putting things together on a string tells a story as well.”

These are stories that Pipka is happy to tell.

“I’m honestly lucky to have the opportunities that I do,” she says. “I get to create on a daily basis. I get to see friends come into my shop every day. I get to do what I love, and nothing is more thrilling than that.”