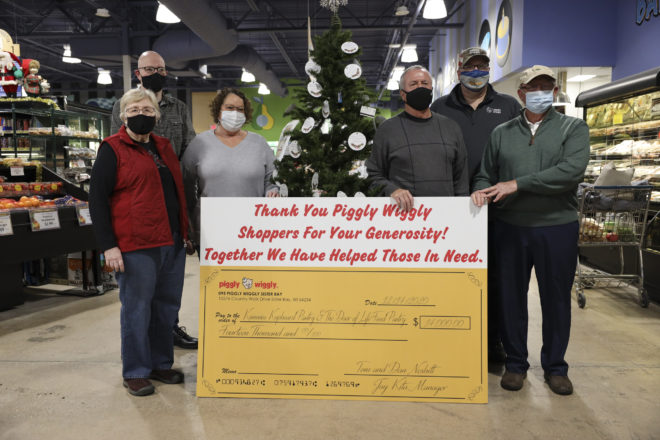 In a difficult year, Door County residents and business owners have found ways large and small to step up and help their neighbors in need.

At the Piggly Wiggly in Sister Bay, customers have been buying gift cards throughout the year and donating them to support local food pantries, to the tune of $7,000. On Dec. 23, Piggly Wiggly management announced it would match those donations dollar for dollar.

Owners Tom and Dan Nesbitt, along with general manager Jay Kita, presented a check for $14,000 to support the Door of Life food pantry and the Koinonia Kupboard food pantry.

Winnie Jackson of Koinonia Kupboard and Heidi Penchoff of Door of Life were stunned by the generosity.

“This is going to help us maintain families for months or even all year,” Jackson said.

It comes after a year in which they say they’ve seen more new people using the pantry – especially service-industry workers who lost so much work this year. That comes in addition to the many senior citizens whom the pantries help.

“It gives them so much dignity to be able to come in and shop for what they need,” Penchoff said. “We’ve seen a significant increase in people coming, and in people who have never had to use the pantry before.”

Kita said the donation is a reflection of the spirit of the community.

“For the kind of year everyone up here has had, I feel we need good news, and it just shows how strong our community is,” he said.

Helping One Paw at a Time

As a member of the Sister Bay/Liberty Grove Fire Department, Amber Strege wanted to pitch in to the department’s efforts to help the community through the Emergency Support Coalition. But when the Safer at Home order was lifted this spring, her time was dedicated to her dog-grooming business as customers flocked to catch up on lost time.

“I felt bad that I couldn’t volunteer more time to the coalition,” Strege said.

So the Sister Bay resident, who operates a small pet-care business called Hound of My Heart, found another way to give back: She began donating 10 percent of her business income to fire departments and local charities. Each month she picks one fire department and one other charity, then splits her donation between them.

As word of her efforts spread, some of her customers began throwing in a little extra for her monthly donations as well. By year’s end, she will have donated more than $3,800.

“Handing off the checks to these organizations has been the most amazing thing to be able to do during isolation,” Strege said.

Like many people, Emily Johnson was struck by the negativity she saw on social media this year.

“People are very divided right now,” Johnson said. “We’re focusing so much on what we can’t do right now, and I wanted to find out what we can do.”

For several families, all it took was a simple positive post to change their holidays.

“I’m wanting to pass along some positivity and Christmas cheer,” Johnson posted. “If anyone knows of a family that needs some extra help this Christmas, please message me, and we’ll try to do something nice.”

Within hours, she was inundated with messages about families in need and offers to help. One offer to help came from Steve Waldron.

“I saw her post about helping families, so I jumped right on there,” Waldron said. “She told me what she had in mind, and I beat the bushes a little bit to see if I could raise some money. The first person I called sent me $1,500. I could hardly speak.”

“I was just going to get a gift card and some food, but because of Steve, it went to a whole other level,” Johnson said. “It shows the power of positivity and what it can do, which we really need right now.”

Waldron, who’s retired, works at the Bargains Unlimited resale shop in Sister Bay and volunteers for the Door of Life food pantry.

“My wife and I aren’t rich,” Waldron said, “but we’ve never been hungry, and you see people who need things up here, and you just feel you need to do something. As you get older, you want to give back.”

Waldron said the effort showed the impact that a simple suggestion can make.

“It just takes the initiative,” he said. “Emily is really something. You can’t think about stuff and just not do it. Every Christmas I’ve thought, ‘I wish I knew a family I could help.’”

For Johnson, who works at North Shore Bank, it pumped some perspective and positivity into a year of bickering.

“I think we have a tendency to forget that our situations are so much better than many other people’s,” she said. “I’m thankful I have a job, a roof over my head and food in my belly. I decided it was time to do something positive. People forget how wonderful this community is.”