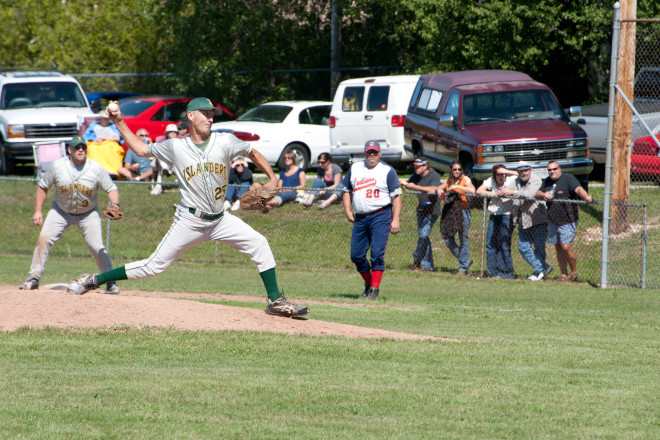 In most sports, you’ll hear this phrase thrown around: “Defense wins championships.”

In Door County League baseball, however, I would argue that pitching wins championships. I know – the pitcher is typically considered part of the defense, but if you look back through the history of the Door County League, you’ll see that most dominating teams had a dominating pitcher.

That doesn’t mean the pitcher had to strike everyone out, but those pitchers were the ones who typically took the ball on the hill every week and kept their teams in every game.

Mark Woerfel won a staggering 11 Pitcher of the Year awards, and during eight of those years, his team won the league title. Seven were with Sister Bay, and one was with the Island.

Quinn Schartner of Institute appeared in three straight title games from 1999 to 2001, winning Pitcher of the Year in two of them. Clark Erickson, Adam Bretl, Dave Neinas, Dave Jilot and Robbie Schartner all won multiple Pitcher of the Year honors and, in most cases, led their team to a title.

But one need only look at the past six years of Door County League play to see how important pitching is. It’s given the No. 1 spot in the positions for a reason. Sister Bay won four straight titles from 2014 to 2017 with the dominating arms of Sam Forkert and Ryan Demmin. But they also had quality backups who could come in and do the same amount of damage. They didn’t win a fifth title in 2018 because a new kid in town, Alex Byrne of Egg Harbor, dominated them in three games to include a winner-take-all title game. He helped to win a title again the following year.

If you want further evidence on this matter, take a look at the current standings. Byrne threw a no-hitter to start the 2021 season, but a sore arm left the Indians at the bottom half of the standings after last week. Anthony Jennerjohn has given them some quality starts, but his availability due to Legion play further handicaps the team.

Maplewood’s starter, Nick Brauer, came back from college, and his dominance was felt as he bested hot Kolberg at the time. But an injury to Brauer has kept Maplewood also looking up. Baileys Harbor hasn’t been able to find its true starter yet, and that has led to zero wins. Institute, as of late, has gotten some quality starts from Robbie Pollman and finds itself in the thick of things.

But the top four teams at this point in the season have exactly what I’ve been talking about: a quality, go-to pitcher. Forkert again has Sister Bay on top. Kolberg’s two-headed monster of Jake Schneider and Trevor Reinhardt has kept that team in every game, and Alex Johnson of Washington Island has his team matching the Bays win for win, setting up a potential dandy of a ballgame July 18 on the Island. But let’s not forget Drew Tanck and the Ports who, after a slow start, are back in the race after winning the pandemic tourney last summer.

So, although I agree that the eight other players behind the pitcher are important and the offensive side of things is as well, give me a lock-down starting pitcher, and I’m sure to come home with some hardware.

Institute has climbed up the standings to enter the playoff race as Door County League baseball enters week 11. The Cubs made a statement by knocking off the Islanders, 2-1, which puts Sister Bay alone at the top of the standings heading into Sunday’s matchup on the Island. Stock the bitters, and prep the extra ferries because a big, fired-up crowd will be descending on Main Road Sunday afternoon!