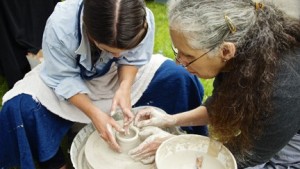 Recently, fate sent me an opportunity to try a craft I never had before –pottery throwing. I hadn’t stuck my hands in clay since high school, but I always found it oddly pleasant and was eager for the excuse to do so again. Thus at the Settlement Shops Farm Market last Wednesday, under the guidance of Patsy Stierna and her business partner Jeanne Demers, I returned to the dirt.

These two ladies typically toss their pots at Stierna’s home studio in Sturgeon Bay. Stierna, since migrating to Door County from a Minneapolis suburb seven years ago, has started throwing and hand-building pottery every season instead of just in the summer. She has also begun selling it and teaching others the art too.

Now, on occasions like Wednesday’s market, Stierna frequently combines these two occupations. At her stand, there was a wide array of stoneware for sale, including bowls, mugs, and plates, as well as a wheel where she and Demers helped many an amateur form their choice of either a bowl or a vase. My two sisters, my dad, and I all took a turn. Well, I suppose I sort of took three – on my first two tries, I was so fortunate as to find out what happens when you press too hard on the walls of your pot. If you were more successful than me and fond of your finished product, you could pay for the clay and take it home; within a day, it dries hard enough to be painted. 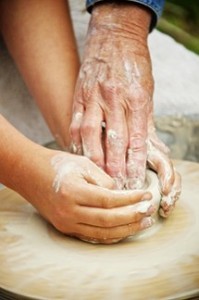 Though Stierna and Demers will also be doing lessons at Sister Bay’s Festival of Fine Arts in August, much sooner on their docket is Egg Harbor’s Renaissance Faire this coming weekend. There the two women – along with another friend, Amanda Hatton, who makes clay whistles shaped like animals, flowers, and fairies – will be running a similar station, but here children can audition for an apprenticeship with a traditional kick-wheel instead of Stierna’s modern contraption. They will also have a chance to come back and decorate their pieces.

My family and I thoroughly appreciated our throwing experience, yet the mystery still remains – why does molding mud feel so darn good? Before, as I glanced pityingly on the discarded heaps of my first two artistic attempts, I had recalled Job’s lamentation:

Your hands fashioned and made me

And now you turn about and destroy me

Remember that you have made me of clay,

And will you turn me to dust again?

Of course, Job was not singing in persona pot, but as a man in distress. I pondered: perhaps we humans have a particular affinity for ceramics because we are all, metaphorically speaking, God’s pottery? Or because we, like the pots we press, are all dust and to dust we shall return?

Or maybe, every once in a while, we just enjoy rolling up our sleeves and getting our hands dirty. After lauding pottery’s product for its permanency and practicality, Stierna described the process of creating it as simply “a way you can garden year round,” for she, in addition to being a proficient potter, is the daughter of organic farmers and a lifelong gardener. Someone with little skill in either art form (like myself) could also honestly praise – it’s still as much fun as making mud pies used to be!

Patsy Stierna sells her Door County Natural Creations weekly at the Jacksonport Farmers Market, beginning at 9 am, or by appointment at her home studio (920.743.4759).