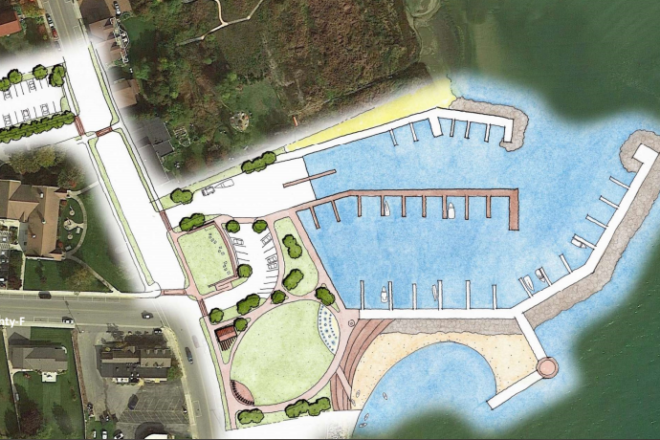 The Baileys Harbor Town Board is proceeding with this concept plan after the highest number of community members selected it from the four options created during the master planning process. Source: Edgewater Resources.

A consensus plan has emerged that would transform the former Nelson property and adjacent Town Marina.

The Baileys Harbor Town Board agreed earlier this month with the preliminary plan to convert the former Nelson property into a public park. Voters overwhelmingly approved the purchase during the town’s annual meeting.

The consensus plan was presented by Greg Weykamp, director of design for Edgewater Resources, the consulting firm the town hired to develop the master plan for the space.

“We’ve had this process that we call continuous community involvement, so everything that we have done – the entire design process – has been really in the public eye,” Weykamp said.

On May 16, the first community meeting was held to introduce the project and gather initial thoughts from the public. On May 17, an initial concept-review session was held, followed by a consensus plan review session June 9. Members of local organizations and homeowners’ associations, town leaders and business owners also participated in individual stakeholder meetings.

Through these meetings, a consensus emerged: Most citizens wanted a public green space where they could see the water. Many also prioritized sustainable design and preservation of the area’s natural biodiversity and dark skies.

The final concept of the project reflects these priorities, with the proposed ADA-compliant, oval-shaped green space featuring new public restrooms and an open-air bandshell.

Other features include a boat launch with an additional staging area, a fuel dock and beach access with a stepped waterfront promenade. A kayak launch is also planned for the beach in front of the new park. For children, the concept includes a flat splash pad with pop-jet fountains that becomes a plaza when the jets are turned off.

To accommodate people driving to the new space, the concept includes switch traffic flow, bump-outs or curb extensions at two high-traffic crosswalks along Highway 57, and additional parking, including about 14 marina spaces and 22 more across the street.

The proposal also features a new boater-services building, which would be larger than the existing one but set lower to maintain a clear view of the water. The new building’s flat, green roof would be surrounded by a thin railing and covered with chairs and tables.

“The next layer of design, you really get into the nuts and bolts and the special little features that tell the stories,” Weykamp said. “Right now, it’s still about programs and high-level costs.”

Estimates have been developed for the concept as designed. Phase 1 of the plan, which involves demolition and park improvements, is estimated at $1.87 million. Phase 2 of the plan would involve parking and bump-outs, estimated at $200,000. Other items that need to be prioritized include the breakwater/beach enhancement at $1.34 million, boat-launch relocation and the boater-services building at $2.7 million, and additional docks and fuel system at $930,000.

The town’s Nelson Property Ad Hoc Committee has also submitted a request for proposals (RFP) to the Baileys Harbor Town Board for relocating the stand-alone Nelson-property garage. The board approved the proposal, allowing any citizen to ask to move the garage.

The committee also submitted an RFP to demolish the other Nelson-property structures that are too large to be moved, which was approved as well during the town board’s July 11 meeting.

The next step is for Edgewater Resources to work with the ad hoc committee on updating cost estimates and budgets, pursuing grants and prioritizing the project’s features.