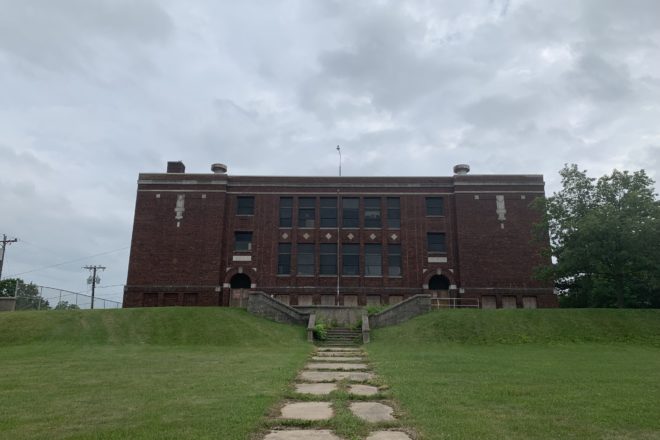 The city’s plan commission gave the OK to a Planned Unit Development agreement with Andy Dumke and Cal Schultz of Northpointe Developments in a 6-1 vote Oct. 16. Northpointe’s proposal to use the old school as the centerpiece of a 40-unit housing complex would take advantage of tax credits for historical reuse and redevelopment and affordable housing.

Apartments for those making 50 percent of the area’s median household income would rent at $565 for a one-bedroom unit, $660 for a two-bedroom, and $750 for a three-bedroom. The WHEDA tax credits require that a minimum of eight of the 40 units proposed for the development be guaranteed for veterans.

In the agreement, the city would sell the school and part of the west-side softball field to Northpointe to make room for the addition. To make up for the loss of the field, the city is investigating options to renovate a field near Sturgeon Bay High School.

The agreement will get a first reading before the Common Council Nov. 5 and could be approved as soon as Nov. 19.

Mayor David Ward said one of the biggest battles in getting neighbors on board with the proposal involves clearing up misconceptions about affordable housing. Ward explained that for the builder to qualify for the tax credits to make the project possible, tenants will need to meet certain qualifications.

“As opposed to public housing, where the governmental body stays involved or maybe even runs it, this is operated privately with certain requirements on the builder,” he said. “Conditions for renting include having a job and having your income at a certain percentage of the county’s median income.”

Dumke has said that if this development is successful, he will pursue a phase two on the property to build housing for people who are older than 55.

“That’s another big hole we need to fill,” Ward said. “I think it’s the right direction and really starts to redefine – along with the news on the Maritime Tower – some rebirth and rejuvenation of the west side.”

The Door County Maritime Museum announced this month that it has secured a $1 million donation from the George Kress Foundation for its proposed Maritime Tower. The museum’s development manager, Sam Perlman, said the donation puts the fundraising campaign at $4.3 million of its $5.5 million goal. The campaign was launched to great fanfare in 2014 before stalling.

The 10-story tower will include interactive educational displays highlighting maritime history, people and industry, plus panoramic views of the city, bay and canal.

The council is making plans for a first phase of improvements to the west waterfront in 2020 as well, budgeting about $450,000 in capital-improvement funds from TIF District 2 for completing the promenade along the shore from the Maritime Museum to the Oregon Street Bridge.

The city has matching-grant funds available through Coastal Management and the Department of Natural Resources Stewardship Program to fund the rest of the improvements. Though planning for the entire West Waterfront property remains in some flux, Ward said sprucing up the waterfront will show residents and developers some forward movement on the site.

“Nobody seems to disagree that the first 100 feet or so from the shore is going to be public walkway, so let’s get on with it and show some progress,” Ward said.

Once completed, the promenade will connect the existing public walkway from Otumba Park, past Sonny’s and the Maritime Museum, all the way to Sawyer Park on the other side of the Oregon Street Bridge.

The city will hold a public hearing on financing for its proposed 2020 budget Nov. 4, 6 pm. The budget proposal includes an additional $500,000 for street improvements compared to this year. That money will come from the general fund and will allow the city to go from improving about one mile of road to two miles for the year.

That funding is a short-term solution, however, because the city won’t be able to pull from the general fund for streets on an ongoing basis. Ward said he still sees the Premier Resort Area Tax as the best long-term solution for city streets, though the future of state legislation to allow the city to enact such a tax looks bleak.