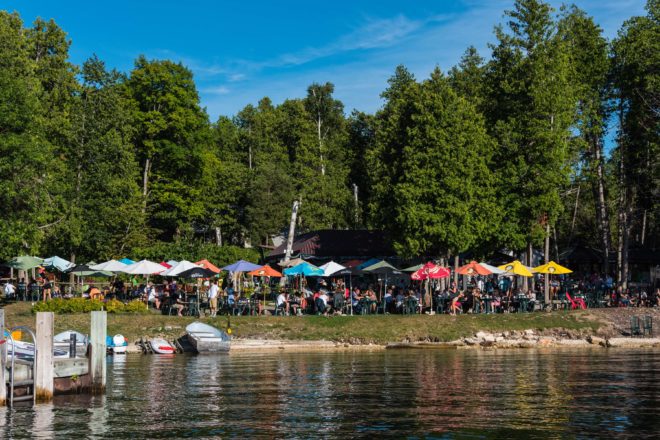 One of Door County’s oldest resorts and most popular summer dining spots may not be in its final days after all.

The Sister Bay Plan Commission denied a request for a change of use for the property that contains the waterfront portions of Little Sister Resort and Fred and Fuzzy’s Waterfront Bar & Grill. The commission voted 3-2 to deny the request by Lance and Bridget Crane to change the property from commercial zoning to residential zoning. The commission is down from seven members to five after losing two appointees in recent months.

“Since this is not a permit, it’s legislative, the appeal process in a case like this would be to take the village to court to force a rezoning,” Nesbitt said. “That’s a tough row to hoe.”

The owners of the resort and adjacent Fred and Fuzzy’s accepted an offer by the Cranes to purchase the property, but it was contingent on the buyers getting approval to rezone the parcels. The Cranes planned to build a home on the property.

Fred & Fuzzy’s has been a wildly popular restaurant since it opened in 2001, and the resort’s 27 cabins have welcomed visitors to the shores of Little Sister Harbor for 102 years. The property is zoned for commercial use and is surrounded by commercial zoning except for residential on the northern property line.

The rezoning request did not apply to the entire resort property. The eight acres of the resort located on the landward side of Little Sister Road would have remained commercial and retained the liquor license used by Fred and Fuzzy’s.

The rezoning request was supported by property owners Greg and Suzy Sunstrom, who have operated the resort for 46 years, and co-owner Paul Luber, as well as many residents of Little Sister Road who submitted letters in support of the change. Luber noted that the restaurant has a major impact on traffic on the road and a change to residential use would return the area to less congested use. Lance Crane said he planned to build a 4,000 square-foot home on the northern parcel and restore the cottage on the south parcel as a guest house.

“As for Fred and Fuzzy’s, we understand the emotions,” he said. “We’ve been going there for 20 years. But the owners have a right to retire. That is their decision.”

He said that decision leaves two options for the property, a large commercial development or a change in zoning to residential.

Others who wrote in support of the change noted that the village purchase of Pebble Beach last year ensures public access to the picturesque inlet famed for its soft stone beach. The village, in cooperation with the Door County Land Trust, purchased 17 acres and 600 feet of shoreline last year to save it from development.

But many residents and longtime visitors submitted testimony against the change, most of them centered on maintaining public access to the waterfront area and maintaining the resort’s history.

Plan Commission Chair Denise Bhirdo said a change from commercial to residential zoning would not be consistent with past precedent set by the village. Similar requests were made for the property that became the Dorr Hotel, Pipka’s, and a property across from Waterfront Park.

“All of these show how the village has stayed on task to preserve commercial property,” Bhirdo said. “I view this no different.”

“I do not consider a single family residence on these two parcels as a hijacking of the land,” she said.

Shumway and Scott Baker voted in favor of the zoning change.

Paul Luber confirmed in correspondence to the village that there are two secondary offers on the property. One of those offers is public. Doug Forrest and Catherine Holtz would like to purchase the entire parcel, not just the waterfront portions. Their plan would retain Fred and Fuzzy’s and the resort, but expand use of the dining hall and turn a barn on the property into a venue for weddings, reunions, and other events. They first looked at the property last winter, but said their plans were put on hold by the COVID-19 pandemic.

“It was hard to see anyone financing a resort purchase when nobody knew if you’d be able to open this year,” Forrest said.

Forrest said they didn’t feel the need to rush forward because they figured the pandemic would put other prospective purchases on hold as well. Now Holtz and Forest said they are seeking additional investors to strengthen their offer.

“We want to keep the legacy alive and growing,” Holtz said. “We’re really committed to preserving the history of the property.”