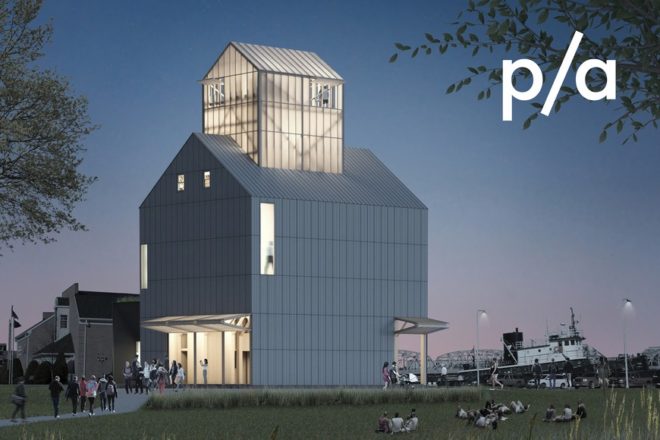 The new granary, as designed by the architectural firm of LA DALLMAN. All photos come from the Sturgeon Bay Historical Society Foundation.

The Teweles & Brandeis grain elevator crossed the Maple-Oregon Street Bridge on March 29, 2018, to arrive at its current West Waterfront location. Because it has idled there for three years now, it may seem as though nothing is happening at all.

The Sturgeon Bay Historical Society Foundation (SBHSF) hired Renstrom in January to usher the project through completion. She told the Sturgeon Bay Common Council on March 16 exactly how she’s doing that with the help of a team of professionals, volunteers and donors.

The building, listed on both the National and State Registers of Historic Places, has been cleaned top to bottom. It has a new roof, and its windows are screened. The lease with the City of Sturgeon Bay has been finalized, and a relationship with the Door County Community Foundation established to aid the fundraising. The design for the space has also been completed by the Boston/Milwaukee-based architectural firm LA DALLMAN.

“There will be a lot going on down there,” Renstrom said. “We’ll put a banner up there that something’s coming, and coming soon.”

What’s coming soon is an adaptive reuse of the space that will simultaneously serve as a reminder of the county’s rich agrarian history and provide a new community amenity and tourist destination. LA DALLMAN won an award for the design that accomplishes those uses as one of five honorees in the 68th annual Progressive Architectural [PA] Awards. Judges selected the five projects from an international pool of 122 submissions.

The Washington, D.C.- based Architect Magazine, the journal of the American Institute of Architects, hosts the awards in recognition of unbuilt projects from around the world that demonstrate overall design excellence and innovation.

“We are proud to take on the challenge of breathing new life into this significant historic structure and to work closely with LA DALLMAN and the team to realize this vision,” said SBHSF President Christie Weber in a statement announcing the honor.

The award narrative described the granary’s design as a “stunning adaptive reuse” of the 1901 harbor-front landmark.

“This project shows how the structures that dot the landscape and are inherently recognized by us as a certain typology could be transformed for reuse, recognition and a sense of place,” wrote architect Daimian Hines, one of the three judges for this year’s awards.

The other winning designs span the globe, from a women’s and children’s clinic in Uganda to a multifamily construction project for formerly incarcerated individuals who are reentering society in New Orleans. Each project exemplifies how architecture in service of the greater good is worth celebrating. But the granary’s design also received the distinction of being selected as the cover photo for the March 2021 issue of Architect Magazine, which announced the award recipients.

“Along with our client and engineering team, we are honored to receive such important recognition for this project,” James Dallman said in a statement announcing the award. He’s a principal of LA DALLMAN and is leading the design team.“It is not often that a community-driven rehabilitation of a historic structure receives a PA Award, and that makes this very special for everyone involved. It suggests a more layered and transformative approach to design.”

Renstrom walked the Sturgeon Bay Common Council through the design, which preserves the grain elevator’s 75-foot-tall silhouette. The ground floor serves as a civic event space. A new path wends its way up, into and through the grain-storage bins above, delivering visitors to spaces carved out for gathering and performance, and culminating at the converted headhouse that’s envisioned as a glass-clad aerie offering panoramic views.

The site will be available as a civic destination for community gatherings, concerts, theater events, lectures, dinners and tours.

“We truly want this to be a cultural center for the community,” Renstrom said.

It will also be available for private use and could seat up to 124 people, according to preliminary estimates.

The next steps will be driving in the pilings and moving the building another 50 feet to its final resting place. That’s expected to happen this spring.

“We’re getting that permit in place as we speak,” Renstrom said.

She said that her team is leaving no stone unturned to uncover funding and grant opportunities.

The SBHSF’s operational goal for the granary is a self-sustaining building that brings value to the community. No budget has yet been released, but preliminary estimates show the building would be self-sustaining in year three, based on the most conservative of the budget models that incorporate the lowest revenue and highest expenses.

“Which is pretty good,” Renstrom said. “So we need to raise the funds to get us through years one and two.”