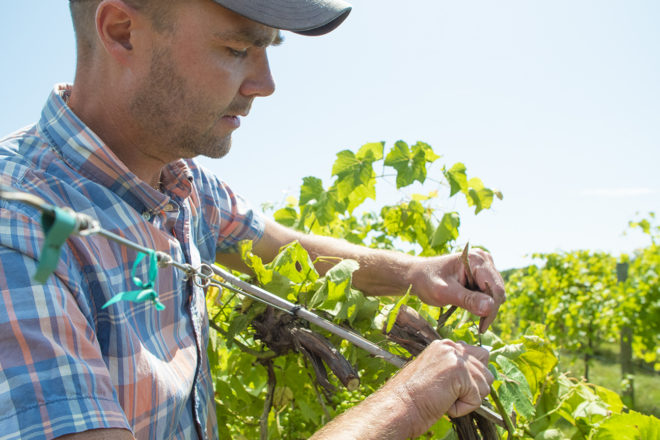 For Russell and Alessandra Rolffs, life on the farm on Washington Island started as a one-summer deal: a no-obligation taste of a simmering idea of combining agriculture with education. But once they got their hands dirty, it became harder to pry them out of the soil.

They were recruited to the island from Milwaukee by Hotel Washington owner Jeannie Kokes, who had also bought Hoot Blossom Farm and was looking for someone to grow produce for the hotel’s restaurant. But Russell and Alessandra’s resume wasn’t strong in the farming department. Russell held a master’s degree in philosophy from the University of Chicago and traveled to Chicago to work as a tutor; Alessandra was working on her PhD in creative writing from the University of Wisconsin–Milwaukee and taught at the school.

“We gardened in the city,” Alessandra said, “and when we lived in Chicago we volunteered with an organization called Windy City Harvest, but we didn’t know a lot.”

What they did know is that they were intrigued by the idea of education centered around agriculture. In grad school, Russell had read a lot about agriculture and grew infatuated with the idea of working with his hands and being attached to the earth. He had also seen how some of the students he tutored in Chicago struggled in the classroom but they gravitated to growing and gardening through Windy City Harvest.

It appeared that the island might be a place for the city dwellers to blend those dreams and experiences, and they were soon looking beyond Hoot Blossom Farm. With Kokes, they formed Gathering Ground, a nonprofit that teaches children and adults about sustainable agriculture. In 2016, Tim and Julie Lyons donated the 10-year-old vineyard they owned on Airport Road to become the centerpiece of Gathering Ground.

“We call it a research vineyard in some ways because there’s just not a lot of organically managed vineyards in the Midwest,” Alessandra said. “We’re pulling together what people here and there are doing, and seeing how it works here.”

They’ve shifted the vineyard to organic management, which involves grafting a new variety of grape onto the existing vines. Russell explained that it’s a process in which you take a new vine or tree of the same family and graft it to an existing vine or tree and heal them together. The result is a new vine that grows from the original root stock.

“The vines are about 10 years old, so we’re trying to take advantage of the roots we have in the ground,” Russell said. “We’re trying to grow varieties that are really bred and selective for disease resistance. This new variety is also supposed to make really great white wine.”

The diversity of the property’s soil has also allowed Gathering Ground to plant other varieties of fruit and nuts. The north vineyard’s soil is very acidic, which isn’t great for growing grapes, but it is good for growing blueberries and lingonberries. They’ve planted 200 blueberry and 80 lingonberry plants as a trial.

The acidic soil is also great for chestnuts, and they’ve planted three varieties: Chinese, Japanese and European. The trees will produce nuts in three years, but they don’t mature until they’re seven to 15 years old.

But they’re worth the wait. Russell said they provide a lot of poundage — about as much abundance as the cornfields across the street. They believe the chestnuts could become a great staple food for the community and even for tourists to experience as a pick-your-own activity.

Not everything has been smooth sailing. A lot of hard work goes into farming, and it doesn’t always pay off.

“We have a major pest … It ate through all of our flowers and ruined any crop potential the grapes had,” Russell said of the 2018 season. And in 2019, he said the pest ate all the flowers on the north end of the vineyard. That pest is the rose chafer, a brown beetle that’s uncommon elsewhere on the peninsula.

“They’re only out for a month, but they do serious damage,” he said.

The organic pesticides he used to combat them didn’t work as well after years of conventional management of the vineyard.

“Often what happens is when you pull out conventional management from an environment, big imbalances happen between different pests because they’ve been artificially controlled and regulated,” Russell said.

“For example, everything that would prey on the rose chafer is diminished because that rose chafer wasn’t available for them. So when you stop conventional management — boom — rose chafers explode, and then their [predators] need time to build up.”

After their first two summers on the island, the couple returned to Milwaukee and life in the city for the winter, but each time they left, they felt more pull to come back. Five years and one son later, they’re entrenched in the soil of the island.