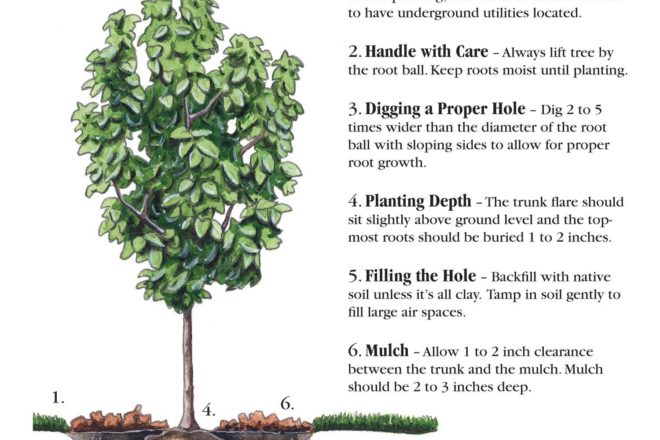 Jake Schroeder can’t help but notice errors when he drives past newly planted, but dead, trees.

Whether looking at large plantings or just a few trees in a lawn, the forestry leader for the Wisconsin Department of Natural Resources’ Northeast Region sees a few common problems, as do other experts.

“The biggest thing fighting trees,” Schroeder said of mass plantings, “are weeds and deer.” Weeds can steal water, nutrients and shade from young trees, and deer destroy many immature trees. People planting one or a few trees at home can protect them by pulling weeds and grass from around the tree, spreading a thin layer of mulch around the tree (but not against the trunk) and putting cages around the trees or placing translucent tubes around the trunks.

With bedrock just a few inches below the surface in many locations in Door County, it’s not always easy to dig a hole to plant a tree. Still, it’s crucial to get the tree root vertical in the hole. If not, a J-shaped root can come back to the surface, girdle the trunk and kill the tree, Schroeder said. If there’s not enough soil between the surface and stone, consider digging in a different location.

A Hole That’s Too Deep, Shallow or Narrow

“Hands down,” the No. 1 mistake people make is planting trees too deep, said Washington Island resident Jerry Landwehr, a horticulturist and co-founder of the Green Bay Botanical Garden. The spot where the trunk begins to taper outward should be above ground, Schroeder said.

Many business operators simplify that instruction by telling people that the top of the soil in the root ball or tree container should be even with the ground surface, but Landwehr suggests planting so the top of that soil is an inch above ground level because trees are often potted with soil too high up the trunk. Also, the planted tree often settles into loosened soil at the bottom of the hole.

Roots should not be completely exposed along the surface, but it’s OK for the top of an upper root to be at the surface, Schroeder said.

Mulch helps conserve moisture for a tree, moderates the temperature around a tree and prevents grass and weeds from competing for sunshine and water, but often people pile on too much mulch, effectively burying their trees alive.

“You don’t want to see the mulch volcano,” Schroeder said. And keep the mulch away from the base of the trunk, Newbern said, because thick mulch can cause moisture and fungus problems, which weaken trees. The National Arbor Day Foundation suggests clearing grass from around the tree and then adding two to four inches of mulch in a three-foot-diameter circle around a small tree and up to 10 feet around a large tree.

New trees need a good, slow soaking after planting, and again once a week throughout spring, summer and into the fall, Landwehr said. Although some tree experts suggest watering twice a week, Landwehr said watering very well just one time per week allows time for the root ball to dry out somewhat, which causes the roots to spread out properly in a quest for more water.

Newbern suggested watering deciduous trees until they drop leaves in the autumn and watering new evergreens until the ground freezes. Bridenhagen said that part-time residents need to find ways to water new trees if they cannot be present weekly.

As part of its long-term ecological restoration plan, staff and volunteers at Crossroads at Big Creek, 2041 Michigan St. in Sturgeon Bay, are adding or protecting the following native species and others. They’re planting a diversity of trees, often with a couple of species in small clusters, simulating how they would pop up and thrive in nature.

• Where rows of exotic, mature and healthy Norway spruce are being thinned out over time: white spruce, white pine, hemlock, balsam fir and red oak.

Because Dutch elm disease killed most American elms that lined streets during the mid-20th century, landowners have had little interest in planting any type of elm, said Ivan Bridenhagen, owner of Bridenhagen Tree and Landscape.

“Some of the elms that are out now are great, but you’re fighting the stigma of something that was in the past,” he said, mentioning that elm varieties including Accolade and Princeton have been doing well.

Also, Bridenhagen said beech bark disease is killing beech trees nationwide and in Door County. He and his crew have been planting shade-tolerant American hornbeam, a native species, in spots that have been suitable for beech.

And, although Colorado blue spruce have been experiencing a wide variety of problems in the Midwest and Door County, Norway spruce are more disease resistant and have been thriving here.