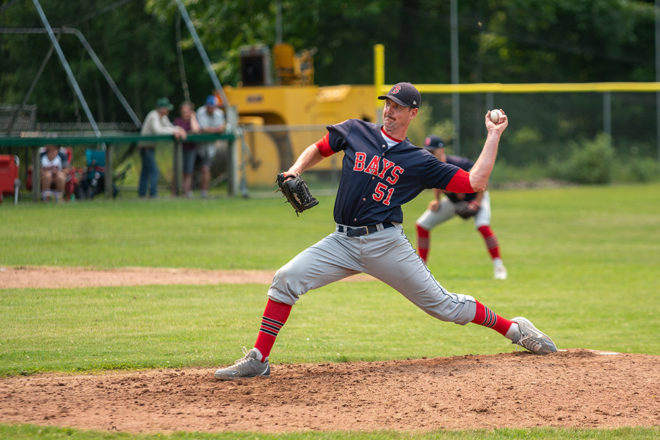 The 2022 Door County League (DCL) baseball season will swing into action this Sunday after coming off a 2021 campaign that saw a slight return to normalcy. By “normal,” I don’t just mean the easing up of a pandemic, but also Sister Bay returning to the championship mountain.

This season, the Peninsula Pulse will run a weekly feature on the upcoming week’s games, and I’m grateful to be a part of it. There will be brief editorials and a capsule of each week’s games, complete with a “swami prediction” made up by a few DCL followers.

Kolberg and Sister Bay will once again battle it out for the top spot, and look for Washington Island, Egg Harbor and West Jacksonport to fight it out for the final two playoff spots. Too many question marks leave Institute, Maplewood and Baileys Harbor looking up to start the season. But sometimes, you just never know.

The Sister Bay Bays open up their title defense on the road against a Maplewood team that must now find a new ace because Nick Brauer has moved away for school. He kept them in a lot of games last year when the offense wasn’t scoring. Coach Kevin Brauer is hoping the pitching-by-committee formula will reveal an everyday starter.

The return of Nolan Wagner to the team will help, as his ability to play several positions will be key. The Maplewood Mets do have some hitters returning in Adam Gutshow, Kordell Draves, Zack Marchant, Kody Kissinger and Tory Jandrin, but they will need to hit a ton if they do not find a consistent starter.
To quote the late Dennis Green from the NFL, the Bays are who we thought they were. After a two-year hiatus from the DCL full-season throne, they returned to the top for the fifth time in seven regular seasons. Pitcher of the Year Sam Forkert tossed over 90 innings while Matt Hecht chipped in his share.

It’s one thing to be dominating pitchers, but these two can also hit. Toss in Tom Sawyer, Griffin Cole, Stuart Larson, Dusty and Sawyer Johnson, and Bubba Laughlin, and, well, opposing pitchers can never take a batter off. If anyone is going to wrestle the title away from the Bays and Coach Alex Higgenbotham, they’re going to have to work for it.

Swami says: Bays start off where they left off.

The Kolberg Braves won the playoff title last year, but they eye the bigger prize of the regular-season title. They should contend again with the two-headed pitching monster of Trevor Reinhardt and Jake Schneider. If they aren’t available, Coach Dave Neinas can just lean on his sons, Charlie and Trevor. Trevor has already thrown a no-hitter during the high school season.

But the Braves are not all about pitching. They do return a lot of hitters, such as Kyle Routhieux, Austin Rohe, Derik LeCaptain, Austen Dart and Tyler Kroll.
After they won the COVID-19-shortened tournament in 2020, the West Jacksonport Ports found themselves in an unusual spot: the bottom half of the standings. Drew Tanck pitched well, but a sore arm at times kept him from having the type of year he’s used to.

Trent Ehlers and Derrick Niedswicki chipped in with their arms and bats, but at times it just wasn’t enough. Ehlers is gone now, but the loss will be eased by the return of perennial all-star Woody Schartner. The Ports will need continued contributions from the likes of Alec Schartner, Jonas Lindeman and Jaeger Brusky to give them a chance of getting back into the playoffs. Coach Eric Bley will see to it.
Swami says: Braves.

The Institute Cubs made the playoffs last season for only the second time in 14 years. They received some really strong pitching after a slow start to the season. Robby Pollman and Brent Haberli hope to repeat last year’s success with help from veteran Kyle Ploor, who added strength at the plate last season.

The Cubs’ new skipper, Jared Pflieger, has some work ahead of him because this will be the youngest Cubs team in many years: Three of the team’s top-hitting veterans will be playing only in a pinch. Youngsters Ethan Kroll and Quinn Schram will need to continue playing well for the Cubs to compete.
The Egg Harbor Indians started last year with ace Alex Byrne tossing a no-hitter. It was all downhill from there as a tired arm from that first week may have been what made them spiral.

When Riley Spetz is available, this is a different team. But when he’s not around, mainstays such as Cory Fuller, Eric Dejardine, Joe Sawyer, and Nick and Brady Kita need to continue doing what they do. Cody Giesseman and Anthony Moore will return after taking some time off, and they will most certainly account for an extra win or two.

If Byrne can regain the form from the 2018 and 2019 seasons, then Coach Matt Ash will have some extra games to coach in the playoffs.

At one point last year, it was the Washington Island Islanders who had the best chance to catch the Sister Bay Bays, but a tough end to the season left them in third place.

Manager Joe Cornell has a bevy of hitters at his disposal with Caleb Cornell, Ben Johnson, Ben and Luke Gieger, Matt Petersilka and Matt Foss. Throw Troy Jorgenson – who can hit and pitch – into the mix, and Alex Johnson – who was a horse on the mound last year – and you just might see another playoff run out of the Island.
The Baileys Harbor team has been in a rebuilding mode for a few years. The key to any rebuild is keeping a consistent group of players together to gel and get better, and this team is starting to see that.

Joe Burlo pitched the majority of the team’s innings last year, and his bat can be dangerous at times. Trevor Jaconbson, Ryan Jacobson and Cooper Nellis were the only players who showed signs of life at the plate last year.

The As will need that and more to start getting some wins. Although they may put up a fight Sunday, Coach Charlie Wood’s team is just too green yet to make any noise on a consistent basis.