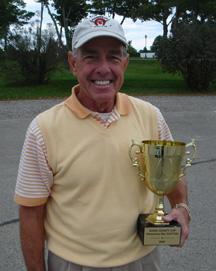 Out of all the questions in the Player Profile, I have found the hole-in-one answer to be the most intriguing, perhaps because it produces the most unpredictable answer, and because behind each hole-in-one is a great memory.

I’m amazed at how many good golfers I have interviewed over the years that have been playing golf their entire lives, but have never recorded an ace. Then there’s Jack here, who has found himself celebrating a hole-in-one an astounding six times. That in itself is unbelievable, but what is more incredible, is that one of his hole-in-one’s occurred on the same day and in the same round as his wife’s first hole-in-one. About two years ago when playing at Ironwood in Arizona, where the couple spends their winters, both he and his wife, Kay celebrated a hole-in-one in the same round!

When doing research on the internet, it appears that there are a few other couples in the universe that have experienced this feat…but not many.

To put things into perspective, one insurance company puts a PGA Tour pro’s chances of a hole-in-one at 1 in 3,756 and an amateur’s at 1 in 12,750. The same company calculates the odds of an amateur making two hole-in-ones in a round are 9,222,500 to 1. It is uncertain what the odds of a married couple scoring two hole-in-ones in one round are, but we can figure close to astronomical. (See his answer to “share a favorite golf memory with us” for details on this incredible day).

Handicap: Currently 7, been as a low as a 3 about five years ago

2) Ironwood (Sussex, WI) – with Kay, my dad and Tom Schmelzer

6) Ironwood – with Mike Woldt and wife, Kay (where she recorded her first hole-in-one in the same round)

Favorite course ever played?: 10 or 12 courses come to mind, but if I have to pick one, I guess I’ll pick Whistling Straits.

Share a favorite golf memory with us: The day that Kay and I both got a hole-in-one in the same round – it is our “claim to fame.” It was at Ironwood in Arizona about two years ago. I got mine on #15 about 180-yards out. I tell everybody I only got to celebrate mine for two holes, because on #17, she put her ball in the cup from about 123 yards out. We had a great day!

Favorite pro player: Arnold Palmer – because he changed the game…“Arnie’s Army” – he got people excited about the game of golf.

Favorite foursome: I have to make it a fivesome – Johnny Goettelman, Dave Ripp, Tom Schmelzer, and Henry Pellitier

What’s in the bag?: All Pings

Interests outside of golf: Is there anything else?