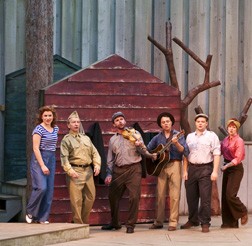 There is nothing more vital to American Folklore Theatre’s (AFT) mission than the creation and development of new works. We’re not aware of any other theatre company anywhere in the world that exists solely to produce original musical theatre.

In the past 18 months alone, AFT presented two world-premiere musicals to great acclaim. Victory Farm was premiered last summer and is being presented again at Door Community Auditorium for seven weeks this fall starting August 30. Windjammers launched its maiden voyage this past summer at Peninsula State Park in Fish Creek.

AFT also commissioned Halfway Station (book and lyrics by Dave Hudson and composed by Paul Libman), a musical exploring the history of the railroad in the Midwest and its impact on local culture, and Forbidden Fruit, a “musical feast of criminal foods” being authored by AFT’s Musical Supervisor, Colin Welford.

Not many folks know that it can take from two to five years for a play to go from idea to commission to rehearsal to final production. At any given time AFT can have between four and ten shows in various stages of development or pre-production. Some pieces never see a main stage production, but rarely for lack of quality. The piece may evolve into something that’s not quite right for our audience, in which case it is released from our development process to take wing and find a more appropriate venue elsewhere.

For a company that presents only original material, the behind the scenes activity and expense is enormous. Then there’s the general challenge of constantly coming up with material that appeals to a broad demographic. This means we try to appeal to that five-year old, his great grandmother and all folks in between. We also are committed to exploring themes that relate to our rich cultural heritage, specific to our state and region. To do this year in and year out takes a huge commitment from everyone involved in the organization, from the board of directors to volunteers to our company members.

Artistic Director Jeff Herbst works continuously to cultivate a creative pool of writers and fellow collaborators from across the country. We have been fortunate to have many returning artists – some have been with us now for decades. Having so many artists returning from year to year gives us crucial continuity and consistency. It’s an intense process requiring trust and a common vocabulary.

AFT just successfully collaborated with the Academy for New Musical Theatre, our first “outside” provider of a writing team, Clay Zambo and Robin Share, who brought Windjammers to our stage this past summer. Established AFT writers also act as industry ambassadors, in effect, location scouts living in Chicago, New York, Los Angeles and Minneapolis who, in turn, help us to identify potential projects or future writing teams.

Our writing collaborators regularly submit concepts and treatments to the artistic director for consideration. When we identify a high-potential project, we engage the team via a commission or engagement agreement. A commission can cost AFT as much as $10,000. While AFT has exclusive production rights to premiere the musical it commissions, those rights are finite. AFT does not own the newly written and produced play. Ownership always belongs to the authors and they receive a royalty of the gross box office.

The New Plays Process is quite involved. Once a draft of the new musical has been delivered, next comes the planning and budgeting required to workshop the piece. The total estimated cost of an AFT workshop is typically $8,000 – $13,000. The workshop is the most critical phase in our new plays development process. The writers finally have the opportunity to hear professional actors begin to inhabit the characters they’ve created.

The weeklong process invariably involves extensive rewrites to both the script and score. A director and actors are hired to rehearse the play as though it is going into production, but without the pressure of having to meet the deadline of an actual performance. The music supervisor begins to imagine final orchestrations and designers flesh out their visions for sets, lighting and costumes. We often capitalize on the opportunity to have a small audience attend a final workshop reading with the objective of garnering valuable objective feedback. A successful and rigorous workshop almost invariably leads to a successful final production.

Per audience demand, our shows are typically remounted two or more times in subsequent summer or fall seasons. With permission of the writers, we may also license the production to be performed by other professional and amateur theatre groups.

The fact that AFT can invest so much effort and revenue in the incubation process attests to the company’s health and broad support. Structurally, the process is supported by the Fred Alley New Musical Fund, a special AFT fund initiated in 2005 and dedicated to the commissioning and development of all of our new works. This fund is supported by individual donations, sponsorships, and granting organizations like the Wisconsin Arts Board.

So for every wonder-filled and awe-inspiring new musical that AFT brings to the summer amphitheater there are oodles of concept discussions, timelines, readings and workshops being juggled behind the scenes. In fact, as you read this, there are probably a dozen writers in every corner of the country tapping away on their laptops, working diligently to come up with a future AFT hit musical for your enjoyment.