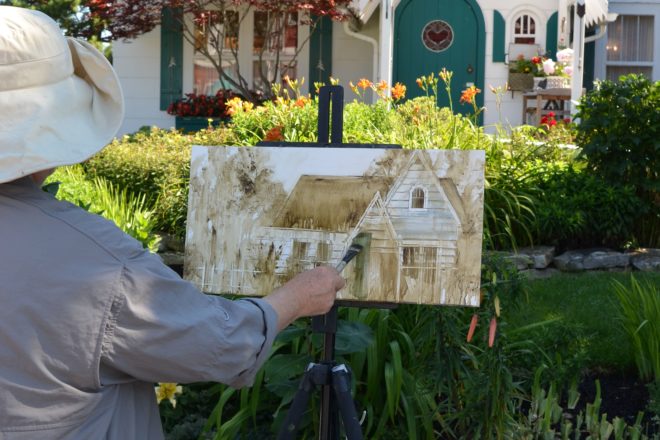 Ready, set, paint! When the invited artists of the 2022 Door County Plein Air Festival take to the Fish Creek streets July 30 for a fast-paced Quick Paint event, they will be viewing the landscape – and their craft – from a different vantage point.

“With a normal plein air painting, you’ve got maybe three to four hours to do a painting,” said Carl Bretzke, a Minneapolis-based painter who’s one of the invited artists. “With a regular painting, I even have time the next day to look at it, to change some things. But with a quick paint, you can’t do that.”

For Bretzke, knowing that he will have a completed painting in just an hour or two alleviates some of the pressure.

“I like that I know a painting will be done in two hours, and I won’t have to go back to it later,” he said.

In other ways, the challenge makes him rethink his entire approach, from the painting’s subject to his strategy to bring that image or scene to life on the canvas.

The term “en plein air” comes from the French expression “in open air.” Throughout the weeklong festival, which kicked off July 24, painters from around the nation capture Door County scenery and locales on canvas.

The idea behind the plein air painting technique involves an artist covering the canvas as quickly as possible in an effort to capture the light and color before the movement of the sun alters the look of the subject. It’s a challenge under the normal plein air painting schedule, but a quick paint doubles down on testing the artist’s technique.

“It’s more simplified because I have a time limit,” said Tennessee-based painter and invited artist Kathie Odom of her approach to the Quick Paint. “I’ve been known to zoom in on something interesting that I see – maybe a pot of flowers with a nice shadow beside it.”

As is her practice with any painting, Odom still makes a quick sketch of her subject before she begins painting – “to know I’m on the right track,” she said. But her approach before she picks up the brush is more deliberate than with a regular painting in that she makes sure she has everything she needs, and exactly where it needs to be.

“I don’t want to spend the time reloading the palette,” she said.

Minnesota-based painter Dan Mondloch takes a similar approach, and he first scouts the area, weighing the pros and cons of different spots to set up and the subject matter in that area.

“Once I settle on a spot, I anxiously set up my gear and mentally prepare for the actual painting, playing out different possibilities in my mind,”  Mondloch said.
One of those “possibilities” is a chatty audience.

“I teach a fair amount and like to demonstrate, and so I’m fairly comfortable chatting while painting,” he said. “But I do find myself pausing mid-sentence in order to make a brushstroke or think through the next sequence of washes, so I can lose my train of thought sometimes.”

That’s why, like Odom, Mondloch adheres to the philosophy that simpler is better.
“There will be an audience asking questions and looking over my shoulder throughout the process,” he said.

But that’s not a bad thing.

“It’s a privilege to paint, and it comes full circle in an event like this where the audience sees the inspiration, gets to watch the painting get made, and has the opportunity to take it home with them at the end of the day,” Mondloch said.

That’s because the Quick Paint live auction – held 12:30-2 pm at Peninsula School of Art, 3900 Cty F in Fish Creek – provides that chance for the public to purchase the paintings that are created during the Quick Paint. This year’s auction will be the return of the in-person event since it was last held in 2019. In 2021, paintings were sold through a silent auction. That allowed the event to continue, but with social distancing.

“There is an energy, accessibility and surprise to the event,” said Executive Director Catherine Hoke. “You never know where the buyers are going to come from. It could be someone who ran across an artist on the street while they were out walking their dog, was struck by the painting and just had to have it; or an iconic scene that attracts a lot of bidding action. You just never know.”
The Quick Paint auction is also an opportunity for people who have never attended a live art auction to attend one in a fun, approachable environment.

“I think people can be intimidated by the idea of an art auction, but we try to make it approachable,” Hoke said. “It’s outside, under a tent, and anyone can bid and participate.”

But, like so many things, perhaps the real joy of the event – for the audience and the artists – is the process.

“It really shows [the artists’] skill and craft to be able to identify, edit and capture a scene in such a short period of time,” Mondloch said. “For attendees, they can see all of the artists in a defined area, walking between them and see a painting being created from start to finish. I often say it is the visual-art equivalent of going to a musical performance, where both the artist and the audience have a shared experience.”

Watch the Artists in Action