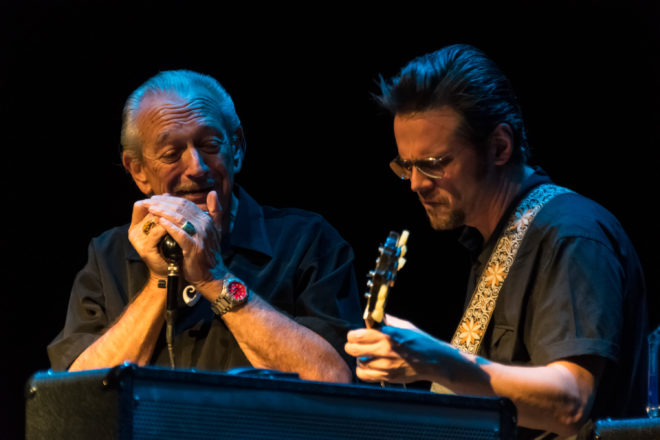 Every moment of hipster history seemed to swell inside the Door Community Auditorium as Booker T. Jones unleashed the famous “Green Onions” riff on his Hammond C3 organ at the second night of the Winter Blues Fest.

And then Jones’ son, Ted, came in on guitar with the tight, crisp, biting, insistent and eloquent Telecaster tone first introduced in 1962 by original Booker T. & the MGs guitarist Steve Cropper. It was one of several spine-tinglingly transcendent moments during the three-night event. 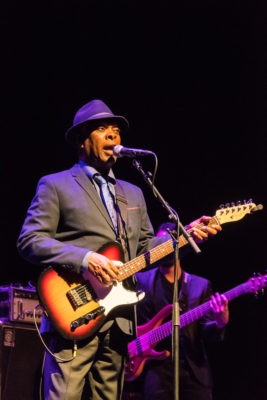 Jones explained to the audience that he was a 17-year-old high school student when he and the MGs recorded “Green Onions,” which quickly went on to become a Top 10 hit. But this is a hit that transcends time and space. It isn’t a mere song. “Green Onions” is one of those iconic musical moments that carries the heft of deeper cultural meaning. This integrated experiment in sound can’t help but make you feel glad to be a part of the human race.

DCA Executive Director Cari Lewis commented on the title of the fest on the third and final night – after three abnormal November days full of warmth and golden sunshine – saying you could thank the DCA for the summery days for if they had called it the Autumn Blues Fest, we would surely be digging out from an early blizzard.

The festival began on Nov. 3 with a screening of Take Me To the River, a beautiful music documentary that details some of the soul and R&B music history of Memphis, teaming up originators of the music with younger Memphis musicians. Here I must admit that when older soul/R&B singers were teamed up with rappers, it proved once and for all time that there is music and there is noise pretending to be music.

The film was presented at the DCA by producer Jerry Harrison and supervising sound editor and recording mixer Eric “ET” Thorngren. Director Martin Shore had been scheduled to appear, but could not make it.

Harrison was introduced, of course, as a member of The Talking Heads. I was disappointed that no one mentioned his role in the influential Boston-based proto-punk band The Modern Lovers (their self-titled 1976 release is a constant on my turntable).

If you missed the showing at the DCA (which I know most of you did), you can catch the documentary on Netflix. A soundtrack album is also available.

Night two was Booker T. Jones and the Stax Revue, recreating hits from Memphis hit factory, Stax. The show included a quartet recreating the hits of Booker T. & the MGs – who in addition to making their own unique music, served as house band for other Stax artists – and a larger group with singers and a really sharp, tight horn section for other Stax hits by the likes of Otis Redding, The Staple Singers, Carla Thomas and more. Plenty of incredible moments. My favorites were hearing the beautiful precision of the Booker T. & the MGs tunes, but also great to hear Booker T. sing and play ethereal guitar.

Night three began with blues harmonica legend Charlie Musselwhite and his band. At 75, Musselwhite still blows like a champ, but his vocal delivery on most of the tunes was just too laid back to fully engage. It wasn’t until his “last” tune and his encore, both from early in his career in southside Chicago in the mid to late 1960s, that Musselwhite really seemed to feel the lyrics. A couple of times his band seemed to be moving at a lickety-split pace that just didn’t seem to fit with the spirit of the songs.

Musselwhite was followed by the North Mississippi Allstars, a trio led by brothers Luther Dickinson on guitar and Cody Dickinson on drums. Wow! 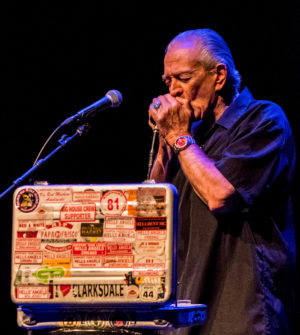 I’ve been listening to these guys since their first album in 1998, Shake Hands with Shorty. Then in 2001 I found the Dickinson brothers in another band with the amazing gospel steel guitar player Robert Randolph. They call the project The Word, and it may be the most joyous music on the planet.

The Dickinson brothers are the sons of legendary musician/producer Jim Dickinson, so they grew up surrounded by music and musicians. These boys must have been sponges soaking it all in.

After seeing him live, Luther is now my favorite guitarist. He also plays lead guitar in The Black Crowes. The way he manhandles sound so effortlessly out of an inanimate object is simply breathtaking. Cody drums with power and precision. It was a joy to behold and there were many transcendent moments throughout their performance. They bring a new world order to the blues. It would be great to see them back at the DCA, if not as the Mississippi All Stars, who are touring next year behind a new recording, then as The Word.

One suggestion for the DCA when they have groovalicious bands such as the North Mississippi Allstars – a private, enclosed box for those compelled to hippie dance to the music, just like the soundproof rooms that used to be available in theaters for mothers with whiny children. It would allow the audience to fully enjoy the music without being distracted by the spastic gyrations of hippie dancing.