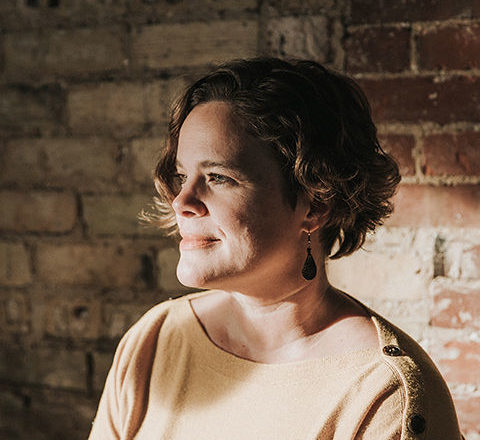 Jill Stukenberg wasn’t aware of the term “eco-fiction” when she started writing her novel, News of the Air. Finding that term, however, helped to shape the way she thought about her work and the insights readers can gain from it.

Her novel follows Allie, who is heavily pregnant, and her husband, Bud, as they flee to Wisconsin’s Northwoods following a outbreak of eco-terrorism in their city. They purchase a fishing resort, where they raise their daughter, Cassie, and live in relative peace until two strange children arrive at their resort by canoe. The novel is told from three perspectives and “explores how we remake our lives once we open our hearts to all the news we’ve chosen to ignore.”

A fishing trip to the Northwoods with her own newborn was the inspiration behind Stukenberg’s novel. She was taken with the idea of having a baby in a place that is a little “wild, creepy and menacing.”

“There was this feeling that it was simultaneously dangerous, but there was a part of me that felt, yes, this is it. We should all hunker down and hide – that’s what we should do,” Stukenberg said.

This feeling is evident in her book. As the climate changes in News of the Air, so does the way people interact with the world and each other, making everyone in this small Northwoods town feel suspect.

“I think nature is a part of our story as humans, and it influences us and connects with us,” Stukenberg said – and this notion presented her with the decision of how she wanted to incorporate climate change in her book.

In many eco-stories or eco-disaster stories, characters are dealing with extremes: wastelands, gas masks and a general collapse of society. But Stukenberg didn’t want to present “doomerism” in her story. Instead, she wanted to convey an idea that’s closer to what climate change looks like in the world today.

“Sometimes people fixate on the big terribles and think it won’t happen here. If it isn’t happening yet, then it’s not real,” she said, going on to emphasize that for some, these extremes make climate change less believable.

So how does an author write about something that’s slow moving?

“You get used to it, like a frog being boiled in water,” Stukenberg said.

She chose to focus on the small details. As the climate changes and more news comes out, confusion grows and some people see the effects more than others, all while everyday life goes on. A lot of what resulted is a look at not necessarily the direct effects of climate change, but rather, the resulting human effects.

“I think nature is such a big part of my book because I grew up with the idea that the natural world, and the everyday world you see outside of you, is not a static thing,” Stukenberg said.

This way of approaching the story illuminates one of the main themes of News of the Air, which is ultimately a story about family, friends and finding yourself.