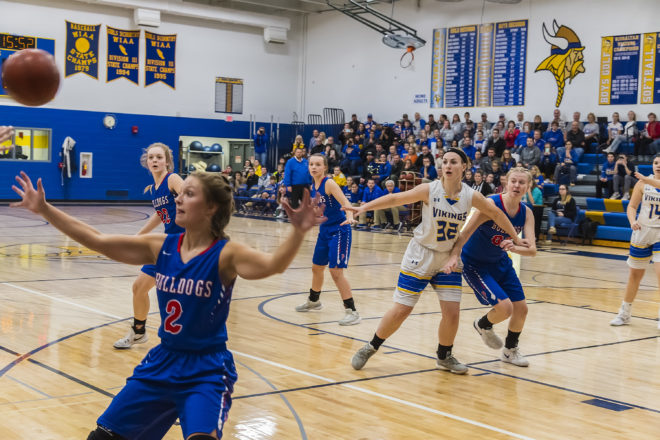 Gibraltar’s Payton Pluff (32) carves out space in the post to position herself for the entry pass from Kayla Follingstad. Photo by Len Villano.

After the biggest night of her career, Gibraltar’s Payton Pluff was humbled. In the first quarter of a 54-42 victory against Peshtigo Dec. 20, Pluff took an entry pass on the right block, turned, and scored the 1,000th point of her career, sending a packed gym into a roar.

“It feels so much greater than I ever thought it would,” Pluff said. “The community showed so much support and I was in awe by how many people came to support me that night.”

Pluff lavished the most credit for her accomplishment on an individual who couldn’t be there – her father Randy Pluff. Almost exactly five years earlier, Randy died after a two-and-a-half-year battle with brain cancer. Though he wasn’t there physically, Payton said his spiritual presence has been an impetus behind all that she has done to succeed on the hardwood.

“If my dad could have been there, I know that he would have been my biggest supporter and the person yelling the loudest in the gym that night,” Pluff said. “He would’ve given me the biggest hug, which was one of my favorite things growing up, a big squishy hug from Dad. I would do anything to have him be there that night, but I know that he was watching and couldn’t be more proud of me. I think he would have said ‘I told you so’ and chuckled a little bit, because he always had so much confidence in me growing up.”

Her father was a 1989 Gibraltar graduate who played basketball and coached for many years at several levels at his alma mater. That included coaching Payton in fourth and fifth grade.

“I owe all my success to my father, and his passing has pushed me to grow as an athlete, because all I want to do is make him proud,” Pluff said. “I felt his presence with me the whole night, and know he was smiling down on me from heaven.”

“I enjoyed every chance I got to talk Xs and Os with him,” Kropuenske said. “He usually would sit behind the bench during the varsity game and he always had valuable insight to offer me, but never unless I asked for it.”

As a freshman Pluff came off the bench and averaged 6.8 points per game. The next year she led the team with 15 ppg and 7.1 rebounds per game, boosting those averages to 15.1 and 8.7 as a junior.

“Over the years she has really progressed from a spark off the bench her freshman season to our main offensive weapon and the anchor of our defense as a senior,” Kropuenske said of Pluff, who is averaging 16.9 points and 5.8 rebounds for the 5-4 Vikings. “She’s definitely one of the best I’ve ever coached. She really enjoys being in the gym and going through the process of improving as a player and a team.”

Pluff said that playing eight seasons of Amateur Athletic Union basketball in Green Bay has helped her elevate her game, but the drives with her dad may have been just as valuable. The two talked basketball the whole time, adding to the knowledge she gained shadowing him as he coached middle school basketball.

https://doorcountypulse.com/recognition-long-overdue-for-gibraltars-kordon/Pluff became the third Gibraltar girl to score 1,000, joining Debbie (Anderson) Kordon and MaKenna Ash. At her current pace, Pluff could become the school’s all-time leading scorer in February. Ash tallied 1,177 points by the time her career ended in 2015, and Kordon scored 1,048 from 1978 to 1982.

Her next goal is to lead the Gibraltar girls to their first ever regional championship. After a tough early-season schedule the Vikings stood at 1-4 but rebounded to head into the Christmas break at 5-4 overall and 4-2 in the Packerland Conference, good for fourth place. They look to continue their hot streak in a Jan. 4 matchup at conference rival Sevastopol.