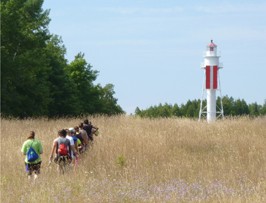 Hikers head to the Plum Island Range Light, an opportunity that might be more accessible if the U.S. Fish and Wildlife Service’s plans for the Great Lakes Islands National Wildlife Refuges move forward. Photo by Tim Sweet.

A chain of islands stretching from the Door Peninsula to Michigan’s Upper Peninsula have long been home to shorebirds looking to nest in uninterrupted stretches of sand and migrating birds looking for a place to stop along the way.

But according to the U.S. Fish and Wildlife Service (USFWS) one of the islands will soon be open to more than just avian visitors.

“They talk about how people could bring their own boats out there, kayakers could go out there,” said Tim Sweet, president of the Plum and Pilot Islands Friends Group. “It would just be a day-use facility, but what a great opportunity for somebody who wants to actually get on that island and do some exploring.”

Public access is in the future of Plum Island, a 325-acre forested island between the mainland of Door County and Washington Island. The island’s home to a lifesaving station and other buildings listed on the National Register of Historic Places. It’s been closed to visitors since it became part of the Green Bay National Wildlife Refuge in 2007 to protect native and migratory bird habitat.

That will soon change, according to the USFWS’s draft of a comprehensive conservation plan (CCP) that outlines how National Wildlife Refuges (NWR) on Great Lakes islands will be managed for the next 15 years.

“The big thing is public access,” Sweet said. “That has been a concern for a long time, so if the plan gets approved and it results in a 15-year management plan, then people who want to go out there would have that opportunity. I think that is a major step.”

Hog Island and Pilot Island are also in the Green Bay NWR, which was designated as a preserve in 1912. The nearby Gravel and Spider islands are part of the Gravel Island NWR, and were designated in 1913.

Islands in other NWRs throughout Lake Superior, Lake Huron and Lake Michigan are also included in the draft management plan.

Those possibilities for outdoor education come at a price. The costs of the proposed improvements for all islands in the Gravel and Green Bay NWRs rack up to almost $1.4 million, a hefty bill for just a few islands. 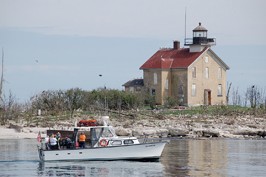 Pilot Island, a safe spot for migrating birds, is part of the Green Bay NWR. Photo by Tim Sweet.

“Everything in the plan is definitely dependent on the funding we receive on an annual basis,” said Sadie O’Dell, USFWS wildlife biologist.

Although public access to Plum Island is a highlight, the plan’s main goal is to protect the islands’ wildlife. The management plan will leave most islands between Door County and Michigan’s Upper Peninsula alone, off limits to boaters, anglers or hikers.

“[The islands] are diverse,” said Mike Grimm, conservation ecologist with The Nature Conservancy. “They’re not all the same size of course, and they have different species associated with them.”

The smaller islands, like Spider Island, don’t have any forest cover and provide nesting habitat for shorebirds like Piping Plovers, Red-breasted Mergansers and the endangered Caspian Tern. Those birds typically have to worry about predators like hawks and raccoons hiding in the woods and beach development encroaching on their shoreline habitat so a small, treeless island is a good nesting spot.

“These islands are really safe spots for these birds,” Grimm said.

Plum Island is larger and has forest cover, which makes it an important stopover point for migrating birds.

When birds migrate north and south with the seasons, they look for places to stop and fuel up on insects during the day. The stretch of forested shoreline in Door County along Lake Michigan and the forests on Plum Island are prime locations.

The management plan for these islands isn’t finished yet. The USFWS is looking for comments from the public through Sept. 23.

“We’ll take a look at all the comments we get and incorporate them into the final document,” said O’Dell. “Then the final document will be released to the public and that will be what we use as our management guidelines for the next 15 years.”

For those interested in talking with Sadie O’Dell and other USFWS employees about the Great Lakes Island Comprehensive Conservation Plan, a public meeting will be held on Monday, Sept. 10 from 5 to 8 pm at the Washington Island Community Center.

“This is a chance for people to come and ask questions,” O’Dell said. “It’s just an open house format, no formal presentation.”

The CCP can be read online at http://www.fws.gov/midwest/planning/GreatLakesIslands/. To get a paper copy of the draft, call 612.713.5477.