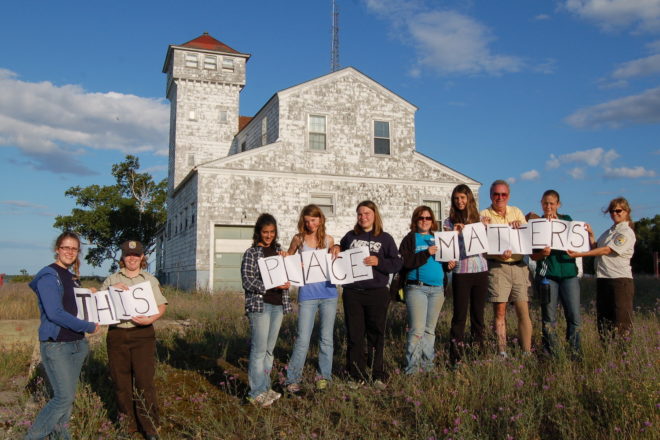 Plum Island volunteers hold up a sign that indicates how they feel about this maritime icon: “This place matters.” Photo by Tim Sweet.

by Tim Sweet, Friends of Plum and Pilot Islands

The Friends of Plum and Pilot Islands organization (FOPPI, plumandpilot.org) has received a $50,000 grant from an anonymous foundation and a contribution of nearly $38,000 from the U.S. Fish & Wildlife Service (USFWS) to restore and fabricate 42 windows in the Plum Island Lifesaving Station.

Located in the middle of the Death’s Door Passage, the 1896 building is historically significant because it’s the only Duluth-style station still standing on the Great Lakes.

A four-story lookout tower is the most notable part of the maritime edifice. Members of the U.S. Lifesaving Service and later the Coast Guard often referred to it as the “guardian of Death’s Door” as it stood watch over the treacherous waters of the passage between Lake Michigan and the bay of Green Bay.

Since the U.S. Coast Guard vacated the island in 1990, the lifesaving station was left to fend for itself against the elements. During the past several years, FOPPI and the USFWS have worked together to replace the station’s sagging front porch, install a new roof and remove lead paint from the building’s exterior prior to repainting the entire structure.

The new funds have allowed the focus to shift to necessary work on the station’s weathered windows. In 2020, the USFWS contracted with the National Park Service (NPS) and its Historic Preservation Training Center in Fredrick, Maryland, where carpenters fabricated and primed 26 windows to replace those that were deemed to be beyond restoration.

This year, the NPS is restoring an additional 16 windows that require wood repair, lead and asbestos abatement, and reglazing. Once the windows are fully restored and primed, all 42 windows will be shipped to the Horicon National Wildlife Refuge in Mayville, Wisconsin. They’re expected to arrive by July 1, 2021.

Volunteers from FOPPI will join members of the USFWS in July to paint the windows at Horicon before the windows are transported to Plum Island. FOPPI plans to hire a contractor late this summer or early this fall to begin installing the tower windows. The remaining windows will be installed in 2022 as more funds become available.

The federal government set aside Plum Island for lighthouse purposes in 1848, and since 2007, it has been under the jurisdiction of the USFWS. Today it’s part of the Green Bay National Wildlife Refuge (fws.gov/refuge/green_bay).