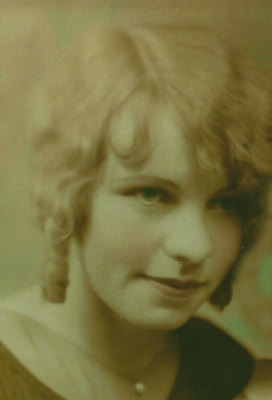 The following poem was sent to the Peninsula Pulse by Baileys Harbor resident Cheryl Miller. It was written by her grandmother, Ruth Forman (nee Fish) and discovered recently by Miller’s mother. Ruth Fish was born and raised on a farm in Ladysmith, Wis. before moving to Milwaukee in the late 1920s, where she married and had two daughters. The family guesses “Lament” was penned sometime in 1934, following the repeal of the 13-year prohibition of alcoholic beverages in the United States.

Oh, Wisconsin’s the state where the beer drinkers dwell,

and there’s no other beverage I like half so well.

As a glass of cold beer, (with the collar just so)

’tis a grand “pick me up” when my spirits are low.

Than any state since prohibition’s repeal.

It is a fine drink and I know you can’t blame us,

For drinking the stuff that made Milwaukee famous.

When I started to drink I was as thin as a rail,

But calories lurk in the old beer pail.

So I gained ten pounds, (and I said I can lose)

the excess poundage whenever I choose.

So I kept imbibing the insidious beer,

and gained forty pounds at the end of a year.

Till I had a shape like the back of a hack

and I began to wish for my old figure back.

To a reducing specialist I merrily went,

and the advice he gave for the money I spent!

His look was severe as he told me with vim,

You cannot drink beer if you want to be slim!

No more beer do I quaff, (with the collar just so),

I’ve lost twenty pounds but my spirits are low.

While others imbibe as much as they please,

I go ’round with my tongue hanging down to my knees.

If I had a godmother with one wish to bestow,

The thing that I’d wish for, you probably know.

Not for a castle in some land afar,

Nor for riches or clothes, or a swell motor car.

Is to drink all the beer I want and stay thin!