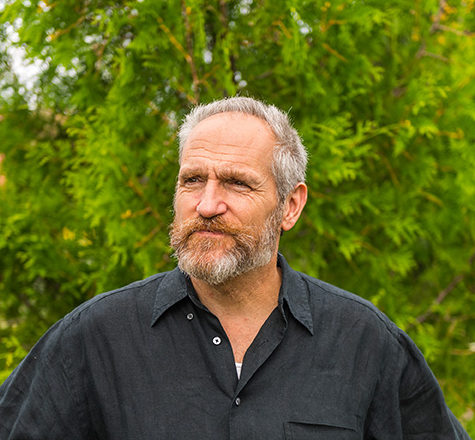 Edward John DiMaio grew up on Long Island in the ‘60s. He moved to Indiana with a woman he called wife in 1992, his mother following six months later. The year 2000 found him moving to Door County and self-publishing his first collection of poetry.

DiMaio lives and works in Sturgeon Bay as a social worker. He coordinates intervention sessions for HELP of Door County and works at Jak’s Place, a drop-in center for people with mental illness. He’s also done work on the side as a carpenter and contractor, but the years of labor have caught up with his knees.

DiMaio is an unusual character for a self-published poet. He has no college degree, has never attended a poetry workshop, and he doesn’t read all that much anymore since his move away from the city ended his train commutes. He’s had to learn how to live with severe dyslexia. But a life of writing, of paying attention, has honed his eye to be able to see the glint of a perspective worth capturing. His part-time hobby has carried him through adolescence and into adulthood.

DiMaio has spent the last few years putting his second collection together, titled When It All Falls Away. It’s gone a lot smoother this time, he said.

He even has the internet on his side this time, though he isn’t sure if it’s helped or not.

Like his first collection, Sound Scent & Light, When It All Falls Away is comprised of selections from DiMaio’s journals in chronological order. Many are sequential, the content coming together to paint an intimate picture of a man working through what life presents to him. The conversational tone is similar to what you’d find in someone’s journal, only they’ve presented it to you, and you’ve found that the usual ramblings and the scribbles in the margins have been removed. When It All Falls Away is vulnerable, honest and far-reaching in its prose and content. DiMaio puts it best himself:

“When It All Falls Away is like when all the armor, when all the weird belief systems and the upside-down thinking falls away, what’s left?”

As a kid, he worked at a summer camp in the Hudson Valley to get away from a hostile home, hoping the distance would create space between him and his angst.

One day, he biked into town and bought a half-page spiral notebook. He wrote in it furiously every night to cope with his feelings, the distance from home insufficient. Eventually, he discovered lines of poetry in his journal entries. They felt different, sounded different.

Years later, DiMaio would read some of his work at open mic nights at the Wesley Center in Lafayette, Indiana when he lived in the ‘90s.

“I realized reading them that there was a certain thing,” he said. “A certain level of communication just like writing them and occasionally having someone read them, but for me to get up and actually speak the words was this whole other dimension. And it was sort of the same thing with publishing. It was deeper, constantly expanding.”

And people liked it. People were moved by his poetry.

“This was when I realized there was value in sharing.”

When asked about his sentiments toward self-publishing, DiMaio was quick to rule out ego.

“I don’t see it that way,” he said. “I see [publishing] as just a different way to share. It’s not all about me…Humanity deserves all it can invent.”

When DiMaio was 12, his grandfather took him to Rome to see the Vatican. Being an eager 12-year-old, DiMaio was excited to see the treasure rooms in the Vatican museums, the vault of all of the ancient artifacts owned by the Roman Catholic Church. His grandfather, though, had other ideas.

“No. We’re not going to go see the treasure room. Come with me.” He led DiMaio deeper into the museum, walking down a maze of hallways and corridors to arrive in a glassed-off room filled with canes, wheelchairs and braces. These apparatuses once belonged to people who claimed to have been healed by the Word. To DiMaio’s grandfather, this was the real treasure room in the Vatican.

Later in life, DiMaio returned to the Vatican and decided to visit the treasure room that his 12-year-old self had wanted to see. The wealth DiMaio came upon was so overwhelming that it brought him to tears. Thoughts of famine, of poverty, of the misery of the world took him over. He could hear his grandfather:

“‘This is what I was talking about.’”

Feeling that disconnect between extreme wealth and extreme need instilled in DiMaio a feeling of interconnectedness, that we are all related and that anyone’s suffering is everyone’s suffering. That perspective, according to DiMaio, is what he shares through his poetry.

“We all learn from each other. It’s that sitting around the fire and telling stories. We don’t sit around very many fires these days, but we can publish a book or do an open mic and expand the awareness of everyone, holding up mirrors for everyone, for ourselves…Bringing it all together.”

DiMaio’s poetry is a gesture of good faith encouraging us to come together over vulnerability, to drop our shields and be in communion with each other, to realize our part in the same whole and share what we have to give. If it was up to him, he’d skip over the copyright paperwork and just hand you a book, but for now he’s staying with the trend.

Look for When It All Falls Away in October in local bookstores. You can track DiMaio’s progress through the publishing process on whenitallfallsaway.com.

To be able to give when all signs point to taking.

Giving for the gift of giving.

Giving precisely what it is you would take,

receiving only the joy of giving.

Freedom to walk within each and every moment.

Flying on the wings of now.

sharing what we were