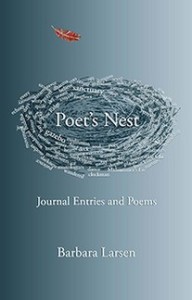 Past Door County Poet Laureate Barbara Larsen has been an integral part of the peninsula’s poetry community since 1986 when she and her late husband, George, became full-time residents in the house they had built on a Beach Road bluff overlooking the waters of Green Bay.

Nestled in her writing chair before a window or perched in her gazebo, she found inspiration for her poetry. Because she has enjoyed a bird’s eye view of nature over the years, the title of her recently released eighth chapbook seems especially appropriate: Poet’s Nest.

Her latest book takes a different approach than the others in that she includes journal entries along with poems, sometimes pairing the reflection with the formal text that it inspired, offering readers a glimpse into her poetic process. In the forward to her book, Larsen recalls a conversation with the late Norbert Blei in which he encouraged her not only to offer this combination, but to reproduce copies of journal pages.

The tone of Poet’s Nest differs from her earlier books in that the poet, now 88, is at a point in her life at which she not only looks back but also contemplates the meaning of that existence, now that she has lost her husband of more than 60 years and has moved from her home on Beach Road to a retirement community. But while the tone of her book is at times somber, it is not one of regret and certainly not self-pity.

Her life as a poet has included not only publications of her work and awards for her verse, but teaching workshops for students and adults, and founding two ongoing writing groups of which she continues to be a member. Her latest book is not a valedictory to her readers but rather a progress report.

The chapbook is divided into four sections: Living in the Now, Landscapes as Friends, Cycles, and Dharma. Entries and poems (some written recently, others culled from her past) reflect upon her life experiences, observations and philosophy, one that draws upon Eastern influences.

As current Door County Poet Laureate Ralph Murre observed, her book “is evidence of a great wisdom gleaned from a life well-spent in the search for truths and, yes, in the pursuit of happiness.

“This is a book of very philosophical poetry,” he continued, “by one of our most deservedly revered tribal elders” offering “glimpses into the author’s journals, lending insight and illumination to the selected verse.”

For example, the 1992 journal entry preceding “Winter Dance” reads in part: “Put down a poem which I had taken notes on in the dark one night after we [she and her husband] had lain snuggled together while the wind howled & rain pelted the roof….I had tentatively called it ‘Winter Dawn’ but [workshop leader] Neil suggested ‘Winter Dance’ which is much better.”

Wind is a wall of sound enclosing the house.

Waves of sleet sweep across the roof.

In our quilted burrow

He turns and I slip into his curve

Some of her poems take her back to her girlhood, as does “Days of Sunshine,” which opens:

I speak of a time and a place

when the days were a yellow ribbon

down the long road of summer.

Pure days of a village summer

tree climbing in the orchard

Her poem “consider the tree” speaks of her developing philosophy of life:

it doesn’t analyze its root system

or agonize over its size

or the direction its branches

one end nurtured by rich darkness

the other reaching toward

She finds life’s meaning in her poem “Essentials” in

sitting on a bench

Watching the sun sink into the bay from Beach Road in “Wonder” offers insight into death, the opportunity to

see for ourselves before it is time

for us to know

in order to listen in

Those readers who have enjoyed Larsen’s earlier books will welcome the opportunity to once again return to her life viewed from a “nest” atop the Beach Road bluff overlooking the panorama of Green Bay waters. New readers will discover for themselves the talent that earned Barbara Larsen the honor of serving as the county’s first living poet laureate.

Poet’s Nest: Journal Entries and Poems by Barbara Larsen is available for $12 at Main Street Market in Egg Harbor.