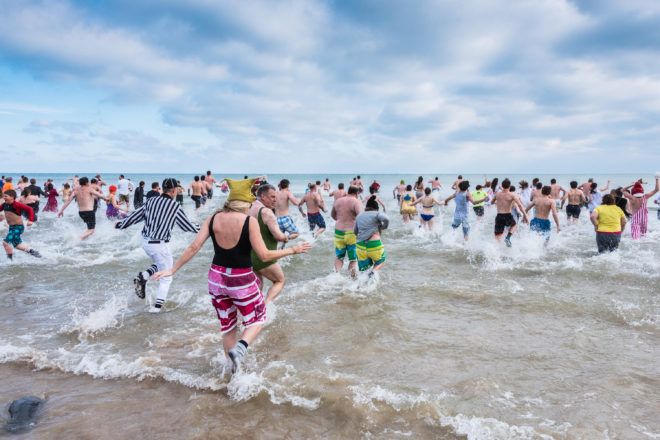 J.R. Jarosh may have found a way to have his cake and eat it, too.

At this year’s 31st annual Jacksonport Polar Bear Plunge, participants are invited to come dressed in 1980s-themed costumes. Jarosh, the founder of the plunge, famously takes his annual New Year’s Day dip in a tuxedo. So he is considering coming as Pierce Brosnan, who often wore a tuxedo in the 1982-87 TV series Remington Steele.

But that could change.

“I’m kind of locked in with the tux, but my kids are going in this year, so I was thinking of switching it up and going in concert with whatever they are wearing, but they’re still waffling, so for now it’s the tux,” Jarosh said.

Having his 10-year-old twin daughters, Abby and Anna, join him this year is going to be a highlight in the three decades of polar plunges Jarosh has taken, to go alongside a couple of other frozen-in-time memories.

“I think the first year my wife – or at that time, my girlfriend – went in was pretty cool,” he said. “Her parents told me how she absolutely hated the cold and there was no way she is going in the water. So when she did, I thought, wow, this could work out.

“I think beyond that, just the years going in with my dad and brother, where I would dash in and come out, then the Three Stooges would meet up and we’d go in together. This year with my girls, I’m really excited for that. My dad’s coming out of retirement. He retired two years ago but said if the girls ever do it, he’d come back for a three-generation plunge. That’s something I’m looking forward to this year.”

Jarosh is also thinking the planets have aligned to make this a record year for participants.

“A week-and-a-half ago it looked bad. There was a lot of ice,” he said. “I walked about 150 feet off from shore on the ice and it was a three-, four-foot drop from the ice shelf to the water. But now it’s all gone and it’s sand, so right now it’s perfect. I’ve been watching the temperatures between now and the first, and it’s not good icemaking weather. Tentatively, all the conditions are very good to have a great turnout. It’s a Sunday. The forecast looks like 30 and sunny, and the Packer game getting flexed to the nighttime means people are wide open when they had maybe planned to be in front of a TV, so it’s encouraging.”

Jarosh said he is also excited to have newly designed t-shirts and hats to sell, with profits going to the Jacksonport Fire Department.

Jarosh said he always gets amped up for the plunge, but having his girls join him brings it to a new level.

“As I get a little older now and have perspective and now my children going in, I’m really going to bask in it and enjoy my experience. I’m really going to try to be present and soak it up as much as possible. If they take away from it what I have the last 30 years, it’s fun personally, but on a broader view, it provides a really fun platform to make a positive memory. As you try to raise your kids to be philanthropic and thoughtful to others, trying to keep the swim going in some form provides a lot of positive energy that the world needs a lot more of.”

The Jacksonport Polar Bear Plunge begins at noon at Lakeside Park, the same time as the Bi-Polar Plunge at Waterfront Mary’s in Sturgeon Bay.

Kylie Pagel, office manager for the associated Beach Harbor Resort, said depending on conditions, they either cut a hole in the ice or just break up ice that has formed along the beach.

“We’ll have our usual host who comes every year and wears something outrageous and we’ll have a band, The Velveetatones, and fully loaded Bloody Marys as the special,” Pagel said. “It’s fun and always energizing.”

She mentioned that Beach Harbor is offering “Don’t Drink and Drive” rooms on New Year’s Eve, starting at $45, for those who want to start the party early.