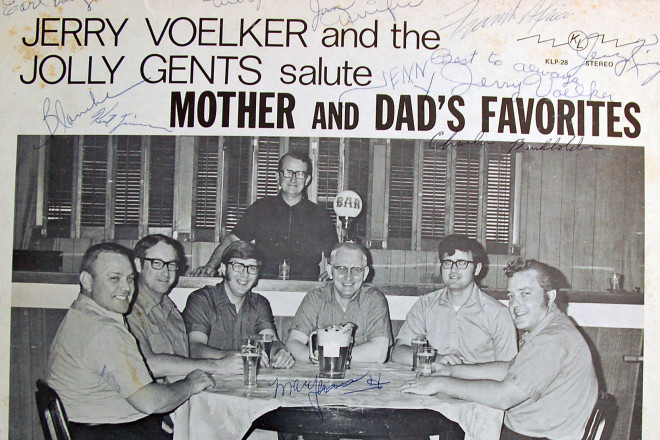 A two-page photo spread following the introduction to the new Wisconsin Historical Society Press book Polka Heartland: Why the Midwest Loves to Polka is a telling statement on the state of polka in this early part of the 21st century – the floor of Turner Hall in Monroe, Wis., is filled with people at a polka dance, but the youngest of the dancers are in their 70s. 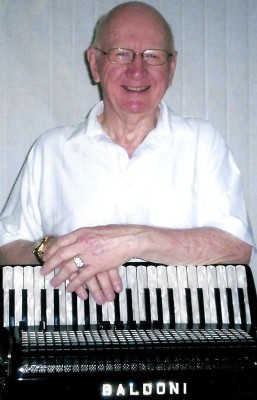 “Our crowd is old and getting older,” said Jerry Voelker, who has led Jerry Voelker & the Jolly Gents for almost five decades. “I doubt I’ll ever see it come back the way it was. We used to play weddings all the time. The last wedding we played for was in Oshkosh. That must be seven or eight years ago. He was 76 and she was 74.”

Voelker is mentioned twice in Polka Heartland. In a chapter titled “The Wisconsin ‘Bohemian’ Polka,” author Rick March explains that the Czech-style – or Bohemian, as they often called themselves – polka bands flourished in northeastern Wisconsin from the 1920s through the 1950s, with the most popular band being that of Roman “Romy” Gosz, who grew up in Manitowoc County. Gosz was a trumpeter with what March describes as a “distinctive, potent, emotional trumpet.” He and his band put such a stamp on the music that it became known as “Gosz style,” and many other bands emulated it, while, March writes, “Other bands, like those of Jerry Voelker [Door County], Dick Rodgers [Pulaksi] and Jerry Schneider [Calumet County], combined Gosz’s sound with other influences to produce their own distinctive Bohemian styles.”

Voelker is mentioned again in a section called “Beer and Polka.”

“The list of well-known polka songs celebrating beer goes on and on,” March writes, and then he goes on to mention “Jerry Voelker, from Door County, Wisconsin, enumerated the troubles caused by too much beer in a song called ‘Barley Pop.’ The singer ‘gets his nose stuck in a glass of barley pop,’ chases a ‘jukebox Juliet,’ and winds up bruised and beaten by ‘the guy behind the bar’.”

Voelker said he fell in love with polka music listening to bands at weddings and other occasions while growing up in Klondike, Wis. It looked like such a blast being up on that bandstand that young Jerry wanted to join in the fun himself.

And play he has.

“We’ve played at Hoffbrau House in Munich, Germany. We’ve played Hawaii and Mexico. We’ve played on cruise ships. We had a TV show in the ’70s. We were on radio, WAUN Radio, every Sunday morning for 46 years. We’ve got 18 CDs out,” he said in a quick summation that doesn’t even begin to encompass a musical career that began in 1961 when he became a member of the Red Suspender Band. Seven years later he was ready to lead his own band, and so Jerry Voelker & The Jolly Gents was born. In 2011 Voelker was inducted into the Wisconsin Polka Hall of Fame.

Part of that longevity Voelker attributes to “being blessed” with a group of faithful musicians.

But Voelker recognizes times and musical tastes have changed. 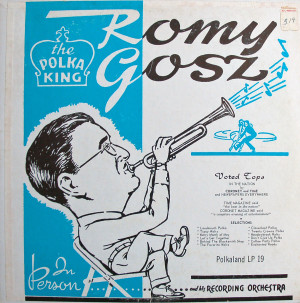 “When I first started we used to play at least 150 shows a year. I bet we could name 30 halls that we used to play that are no more, like Wally’s Dance Palace in Duvall. We almost lived there. The Rendezvous in Luxemburg. The Swan Club. Riverside. Up here we’d play Fernwood Gardens, Carlsville Hall in Carlsville. We’d play weddings at Greenwood. It’s just not happening any more,” Voelker said. “Now a lot of the guys cut their bands down. The state dance in Wisconsin is the polka. DJs now take over for weddings. I can’t say why. The young people are not getting into it. I don’t know why. It’s just changed….”

Then he tells a sad story about getting a telephone call from a friend who wanted Voelker and his band to play at his daughter’s wedding. “I said, ‘Are you sure you want to us to play?’ He said, ‘Well, I’m paying for the wedding’. His daughter was on the line, too, so I said, ‘Honey, do you want us to play?’ She said ‘No, I want a DJ.’ I didn’t want to be the one to ruin her wedding.” 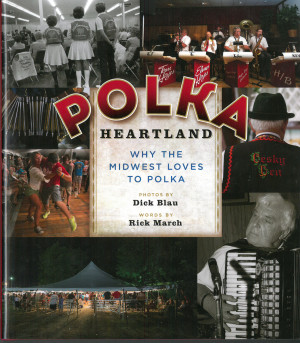 While Voelker feels the world has passed polka by, Rick March and photographer Dick Blau have done their part to keep the tradition alive in Polka Heartland. March is a Milwaukee musician who fell in love with polka and served as DJ of a polka radio show called Down Home Dairyland that first aired on WORT in Madison before moving to Wisconsin Public Radio, where it aired Sunday nights from 1984 to 2000. March explains in the introduction that photographer Blau “ably captured the spirit of the polka scene beginning in the 1970s, when he collaborated with ethnomusicologist Charles Keil on their pioneering book Polka Happiness.”

Blau has captured some great polka moments. One of my favorites is a shot of Concertina Millie playing at Martin’s Tap in New Berlin, Wis. His image of two energetic young tennis-shoed dancers at Pulaski Polka Days makes you think there is hope for a polka revival.

March presents an interesting historical account of the music and the people who make it in the 10-chapter book. The final chapter is titled “New Directions In Polka,” and focuses on the Polkaholics of Milwaukee and the deep polka connections of the husband-wife team of Michelle and Danny Jerabek and their band Copper Box.

In the penultimate chapter, March tackles Mexican polka, and writes about an almost underground club atmosphere where a young Chicago-based band performed in Oregon, Wis., for a Spanish-speaking crowd, a scene that March writes “made me think with regret about how segregated our society is. There are very few Mexicans who attend Euro-American polka dances, and absolutely no other non-Latinos found their way to the practically ‘underground’ night club. I hope for a future when those barriers dissolve.”

In between chapters are what March calls “Polka Interludes,” where he focuses on people (the aforementioned Concertina Millie Kaminski), places (the famous Concertina Bar in Milwaukee) and things (an interlude called The Baldonis of Castelfidardo focuses on Milwaukee accordion-maker Baldoni).